Is This the Definitive Look at the Historical Icon? 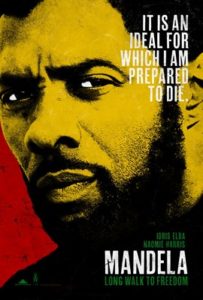 The closing song to the film Mandela: Long Walk to Freedom is U2’s latest single “Ordinary Love“.  In that song, Bono sings about the love between Nelson Mandela and his second wife Winnie Madikizela and how they gave up having an ordinary love in order to pursue a larger goal.  This song encapsulates the aim of the film which is based on Nelson Mandela’s autobiography of the same name.

Idris Elba plays Nelson Mandela and is captivating in the role beginning with Nelson as a young defense attorney, all the way up to his unlikely rise to becoming the President of South Africa.  And though the character of Mandela has been played by many luminaries such as Sidney Poitier to Morgan Freeman, Elba presents the most complete portrayal of the man behind the legend.  He is serious, resolute, but also quite humorous and complex. Despite the strong performance of Elba and of Naomie Harris (Skyfall) as his second wife, Winnie, the film is largely….ordinary.

This is not to say that it is a bad film.  It is quite good, but in light of other films portraying monumental figures who changed their world (think of last year’s Lincoln as a recent example), it gets bogged down by trying to depict too much in the life of Mandela rather than simply focusing on one angle.  It is this attempt to cover all of his life that makes this film work at one level, yet feel like a long walk for the audience on another level.

So often, we in the West have known of Mandela as the civil rights leader whose release from a 27 year sentence in Robben Island, and other prisons, embodied the victory of a brutally oppressed majority who had suffered too long under the evil practice of apartheid.  The fact that he had become President of the nation and reached out to reconcile with the white minority to rule a united South Africa when so many wanted revenge for decades of mistreatment is a testimony to the crushing power that non-violence can have to change the world.

One merely needs to look at the forerunners of this type of moment as embodied in Jesus, Gandhi, and Martin Luther King Jr. to see the power that non-violence and reconciliation can have on the world.  Martin Luther King Jr. was famous for pursuing this path in the civil rights struggle of America in the 1950’s and 60’s because his stated goal was healing where resentment was not present on either side.  Violence, King believed, would only contribute to an increased cycle of reciprocity where those who had been oppressed would become the new oppressors.  To truly defeat the evil of apartheid, segregation, and occupation, each of these notable historic figures absorbed the violence of the corrupt system over them, rendering them powerless.  Once powerless, these regimes eventually were doomed to fall.  Jesus disarmed Rome, Gandhi did the same to the British Empire, and Martin Luther King, Jr. led a movement against the American practice of “separate but equal”.

And while this is Mandela’s legacy, it is not the whole story of his journey.  Mandela: Long Walk to Freedom thankfully doesn’t gloss over the darker side of Mandela’s character.  Starting out as a lawyer who is seeking to change the system non-violently from within the legal process, we get a taste of the oppression that the black majority feels daily from the white minority who is ruling the country.  We see the experience through the eyes of those who knew the pain of losing their sons and daughters as they were crushed under the boots of white South Africa. We see the effect that it began to have on Mandela, to the point where he is willing to take up arms against his oppressor.

The saying goes that “one man’s terrorist is another man’s freedom fighter”.  There is no doubt that from the depictions in the film, and thus from the source material, Mandela engaged in acts of terrorism.  He took part in bombings of key facilities that led to the death of both women and children, even those of his own people who were caught up in the battle as collateral damage.  By not glossing over this fact, the filmmakers do a good job of posing the question to the audience of whether Mandela was a terrorist or a freedom fighter.

In post-9/11, we are familiar with a government’s desire to fight terrorism on all fronts.   This was the position of the white authority of South Africa as they pursued Mandela.  We are also familiar with fighting as freedom fighters against the tyrannical rule of British imperialism.  In our revolutionary war, our soldiers largely did not fight fair, and used swamps, and guerrilla tactics instead of the “gentleman’s” way of fighting war at that time.  We see it as completely justified and can empathize with Mandela and his political party, the African National Congress (ANC), and the tactics he chose to employ.

When Mandela is imprisoned, he begins his long walk to freedom and makes the decision to divert his efforts away from the violence he had reluctantly employed for a time and pursues instead a new path of reconciliation and forgiveness.  While in prison, his wife Winnie is left fighting the good fight of the ANC.  She has been imprisoned herself and been separated not only from Nelson, but their children.  She learns to hate more and more, in contrast to Nelson’s journey towards reconciliation.  Eventually it would lead to them having a very estranged relationship.

Yet despite presenting this balanced and unglossy view of Mandela, the film gets bogged down in telling so much story, that you feel it is simply rushing from detail to detail.  The first 20 minutes of the film is the slowest, connecting you with Mandela’s tribal roots which is at the center of his identity, but it fails to connect with the audience like the last half of the film does where it details Nelson’s journey from prisoner to President.

Both the story of Mandela pre-jail, as well as Mandela in jail and his release are captivating stories deserving to be told.  But by trying to cover both, it weakens the overall experience.  Most will leave the film inspired, challenged, and provoked as I was, having watched the screening of this film the day Mandela died.  However, with a little more of a narrow focus by the script and a shorter running time, this film would have done more than inspire, it would have had the chance to have been a catalyst for change.

This film will entertain and hopefully engage you with a more comprehensive look at an historical icon than what we’ve probably known.  Idris Elba will captivate you in his portrayal of Nelson Mandela, and is deserving of award nominations for this performance.  Ultimately, though, you will leave the theater as U2’s “Ordinary Love” plays over the credits feeling that ordinary is the best descriptor of a movie about an extraordinary man.