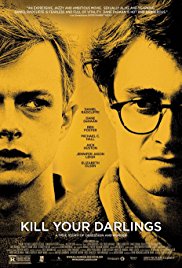 As far as an origin story of award winning beat poet Allen Ginsberg goes, Kill Your Darlings is about as exciting as a hole in the ground. In the best possible way. This wouldn’t be any ordinary hole in the ground – it’d be the still-smoldering crater remaining after something important blew up. The debris is still shifting, as chunks of earth, cinder blocks and rebar arbitrarily break off on their own, dropping away into new formations. One could watch it for hours with a sad fascination, marveling at the morbid beauty of it, while maybe wondering why it had to happen at all. And perhaps this smoking pit is some sort of underworldly gateway, it’s too soon to tell. But one thing is for certain – this landscape, for better or for worse, will never be the same.

In the early 1940s, as World War II was winding down, future countercultural icons Allen Ginsberg, Jack Kerouac, and William S. Burroughs were immersed in the realm of higher education. Their uneasy impact was a good a decade away – the implementation would include Kerouac’s rambling travelog “On the Road”, Burroughs’ lucid drug-fueled prose, and Ginsberg’s anti-rhyming, politically challenging poetry – and would riff upon, define, and establish the countercultural landscape to come, (which in turn has impacted so much of mainstream culture,) paving the way for the likes of Bob Dylan, Jim Morrison, Thomas Pynchon, and so many more. They are the founding fathers of the Beat Generation, writing in strange new ways about confrontational heretofore unspoken topics. Hard drug use. Homosexual encounters. Radical politics. And a continuous questioning of the very fabric of America. United in intent, kickstarted by death. (The death of someone they knew.) “Postwar alienation”, as we like to call it, packed the dynamite, but according to the electric and twistedly compelling Kill Your Darlings, it was a single shared event and relationship that lit the fuse.

Indeed, long before Allen Ginsberg stood in the background of Dylan’s “Subterranean Homesick Blues” doing nothing, he did a heck of a lot. The explosion from his honest and non-conformist poetry would be a comparatively quiet one, but that crater it left still hasn’t been reconciled, even today. Kill Your Darlings doesn’t quite get us there, but it has no outward aspirations to do so. In the film, Daniel Radcliffe (Harry Potter himself) plays a young, passive, and impressionable Ginsberg. The film seems to happen around him, as he keenly and often eerily absorbs it. His sense of self isn’t fully formed, but his rebellious streak is certainly there, waiting for someone to come and propel him. 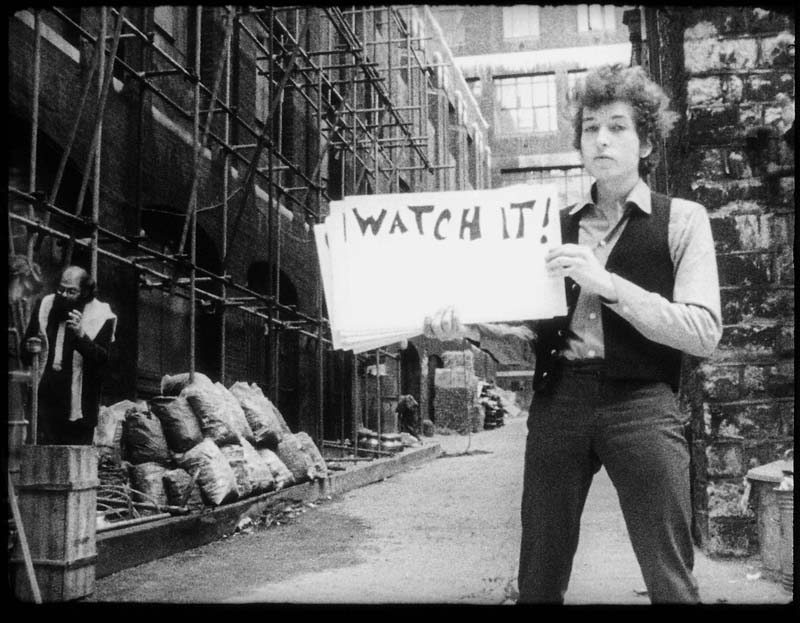 “Subterranean Homesick Blues”, as filmed by D.A. Pennebaker circa 1966. That’s elder Allen Ginsberg hanging out on the far left.

That would be one Lucian Carr (Dane DeHann). He is shown to be the extroverted center of the otherwise introverted group, the magnetic and charming crux of the literary rebellion his cadre of almost famous followers would follow to their destinies. Carr was also (as detailed here) a manipulative no-talent huckster, and trouble waiting to happen. (Or already happening.) By the end of the film, he will have taken the film’s title – which is his own inspired call to arms – literally. Like almost all manmade revolutions, it begins with blood. Young Ginsberg’s takeaway from this brutal incident is the film’s takeaway: Break free, and howl.

And so, first time director John Krokidas has scored with this precisely crafted unpredictable ride of a film. It’s like watching a young Scorsese in action, right down to the eventual looping around to the film’s opening scenes, GoodFellas style, which contextualizes them beyond their initial lapel-grabbing. In the same way that George Clooney’s darkly whacked Confessions of a Dangerous Mind told it’s supposedly true story with such an amazingly sure hand that everyone assumed his pal Steven Soderbergh must’ve directed it for him, so too goes Kill Your Darlings. 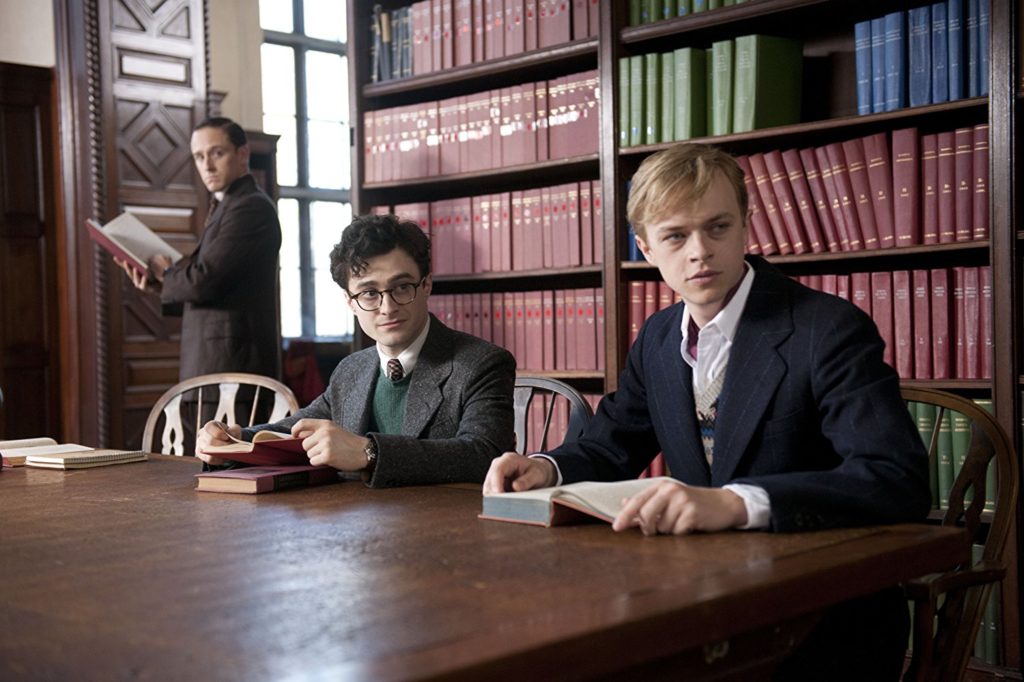 Although his techniques are visceral and eye-catching (in a good way), the sense of hard labored period authenticity is not forsaken. (Visually it compares quite favorably to the chronologically similar The Book Thief, also new in theaters. Whereas The Book Thief is shimmery, overdressed and obviously “earth toned”, Kill Your Darlings is shadowy, lived in, and subtly but firmly color controlled – but not dominated.) And that’s particularly important, considering how the era itself, with its hair-trigger reactionist attitudes and perceptions of anyone and anything abnormal. With its occasional depictions of sex (straight and gay) and drug use, Kill Your Darlings doesn’t present as an easy film, but rather an unflinching and eye-opening interpretation of this vital moment.

Which raises the primary flaw in the film – the motivation for the Rise of Beat Generation. Ominous shots of disapproving stiffs looking on at the rascally group in pubs is plenty telling, but they don’t help in connecting that Point A to the depicted Point B rejection of conventional, canonized poetry and literature. These guys are just angry, and ready to stir the pot that hasn’t been stirred since the decadence of the 1920s. One must vigilantly examine the fringe details of the film to detect many of the motivational cues and clues. The danger they’re looking to cook up goes undefined beyond youthful knuckle-headed acts of vandalism and their boisterous denouncing of the Old, just because it’s old. Somewhere in someone’s mind, this all makes sense. Or at least, it’s a valid enough version of what happened. (And also, an unintended prequel to the Coen Brothers’ even more obtuse early 1960s Greenwich folk yarn Inside Llewyn Davis.) And, since so much of this did in one way or another indeed happen, its a forgivable stumbling block. Thankfully the acting is boldly spot-on across the board, with many of the performers, including Radcliffe, giving risky and internalized performances. Others include Jack Huston as Kerouac, Ben Foster as Burroughs, and Elizabeth Olsen as Edie Parker, and Michael C. Hall as their important acquaintance David Krammer. 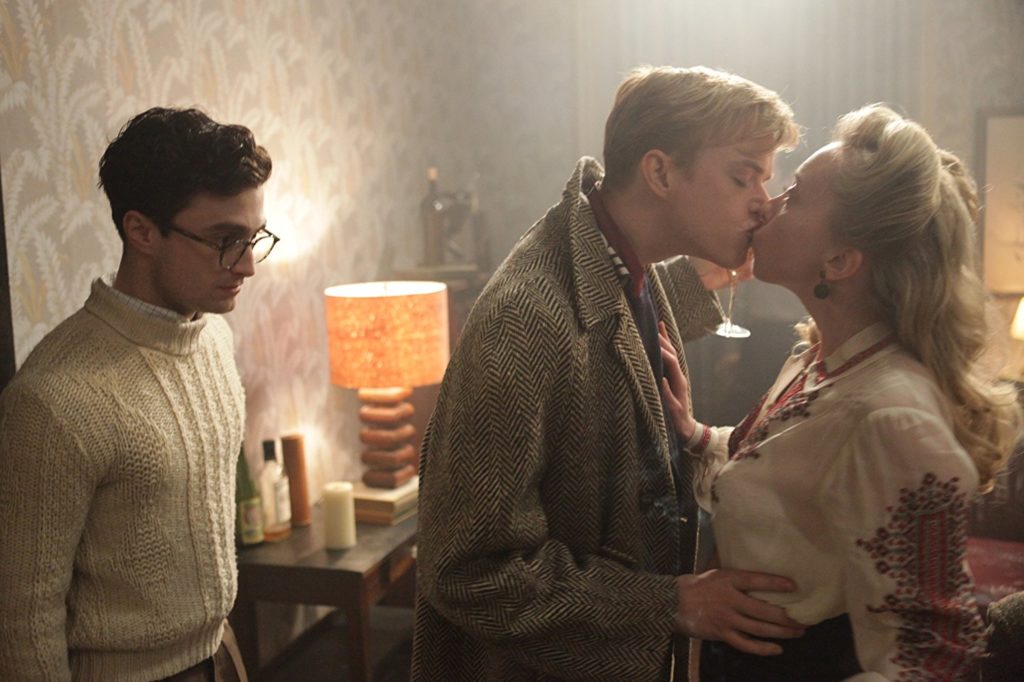 It should be no revelation to state that cultures need shaking up from time to time. It keeps us on our toes, and rattles the ever-gathering complacency from our systems. From there we can ask questions and adjust the systems accordingly. The fact that this process so often comes about via drugs, abuse, hollow intellectualism, and even killing is a sad fact of human brokeness. I dare say it doesn’t have to be that way. Yet it so often is. Ginsberg, Kerouac, Burroughs… Dylan, Morrison… Scorsese, Soderbergh… Krokidas… It can be argued ad nauseam about who’s been a good influence on the culture and who hasn’t. But when taking this stock, or examining this hole in the ground, the human factor must be wholly considered. Kill Your Darlings moves us to kill the entrenched perception of the Icons of these men – and to see these figures differently than we have before, outside and around their now-aging legend, their luridly alluring myths. The smoldering pit they exploded open so long ago might just make for an appropriate burial plot.