A Look at a Sequel 14 Years in the Making 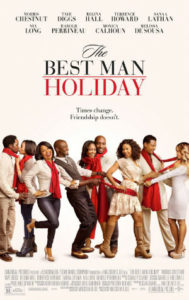 The Best Man was an ensemble film that came out in 1999.  It featured Taye Diggs as Harper Stewart, a writer whose fictional novel will actually expose his true thoughts on his friends, and even expose a hidden relationship he shared with his best friend’s fiancé.  His best friend is NFL star and New York Giant’s running back, Lance Sullivan (Morris Chestnut).  Sullivan is a very committed follower of God yet is at the same time a flawed man with a wandering eye who has known to serially cheat on his fiancé Mia (Monica Calhoun).  In his eyes, Mia is a pure and chaste angel.  When it comes out that she slept with his best friend, and best man for their wedding, Harper, punches fly and the wedding is almost called off.

Rounding out the cast is Harold Perrineau who plays Murch, a man working at a school with troubled students but who is one test away from passing the bar and becoming a lawyer.  Dating a very high-maintenance girlfriend named Shelby (Melissa De Sousa), Murch is looking for someone who will treat him kindly.  Enter Candy (Regina Hall), a stripper hired for Sullivan’s bachelor party.  The two find a connection and Shelby is dumped at Lance and Mia’s wedding.  Shelby looks for a rebound guy and finds another friend in their entourage who fits the bill: Quentin, played by Terrence Howard.  Quentin is a self-described “pimp” who is constantly changing majors in college, years after he should have been done, and who lives mainly for himself.  He is the mirror of truth to his friends, especially Harper who, in addition to keeping the about to be released novel away from Lance, is also trying to balance his relationship with Robin (Sanaa Lathan) while also trying to explore if there is still a spark with old friend named Jordan (Nia Long).  Jordan is the female version of Harper.  Driven and focused, both have trouble dealing with their emotions and losing control of their lives in their professional pursuits.  In the end, the wedding between Lance and Mia happens, Harper proposes to Robin, Shelby hooks up with Quentin for that night only, and Murch and Candy are together.  And this is where we leave this group nearly 14 years ago.

Many years later, in the new film The Best Man Holiday, we find the gang and briefly are caught up with their lives.  Harper is married to Robin and they are expecting their first child after several miscarriages and fertility problems.  His writing career is also in trouble and needs a spark. Quentin is running a successful consulting business but still living the single life he loves.  Murch and Candy are married with kids running the school he formally worked at and struggling to keep it funded.  Shelby is a reality show celebrity on a “Housewives” type show.  She also has a child.  Lance and Mia are living the good life with several children, large house, and with Lance poised to break the all-time rushing yards records in his final season before he retires.  When Mia sends an invite for the old gang to get back together for the Christmas holidays, the movie begins to move into high gear.

Where the original film was a decent, but clumsily executed affair, The Best Man Holiday is a much more tightly directed movie with really good pacing.  The entire ensemble is given equal screen time, and there is a strong balance between humorous interactions and the emotional weight of its much heavier subject matter.

Where The Best Man focused more on the character of Harper, its real driver was Mia, who was the emotional center for Lance and whose hidden relationship with Harper was the catalyst for the tension between the groom and his best man.  In this new film, Mia is the emotional center, not just for Lance, but for us as well.  It is her invitation for the holidays which brings the old gang back together, but it’s her story in the film that invites us to join the whole cast on their journey as well.

Terrence Howard and Melissa De Sousa have the best character arcs in this sequel and are able to bring depth and lots of humor to the most selfish characters of this ensemble piece.  Like the first film, much of the humor is found in the opposing views of life from the vantage points of men vs. women, single vs. married, black vs. white, and faith vs. unbelief.  Malcolm D. Lee directs and navigates between these vantage points both skewering the faults of each point of view, while rejoicing in their strengths.

Ultimately what makes this sequel work is the very human, complex, yet relatable interpersonal relationships that exist between the characters.  You will find elements of the dynamics you have with both friends and family in each of the people represented here on film.  Because of this, you will find yourself drawn into their story, but will leave understanding a bit more of your own.

While it has been 14 years between films, The Best Man Holiday will remind you that some films shouldn’t rush their sequels as the payoff will be greater if they wait.  This film will age better than its predecessor has, and it eclipses the original on every level.  Something tells me that fans of this series of films will not have to wait another 14 years for a new entry in this “Best Man” series, and that’s a really good thing.