Rudolph Valentino Returns in The Sheik Sequel, now on Blu-ray 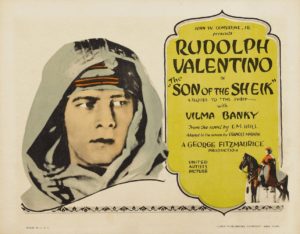 In 1926, the world had not yet had their fill of The Sheik. The landmark 1921 film had been a notable stop on the star Rudy Valentino’s ascent—so United Artists decided to make a sequel to the Paramount original which featured good performances and spectacular sets by William Cameron Menzies. Agnes Ayers left retirement to reprise the role of Diana and some fancy camerawork made it possible to have Valentino play against Valentino since Rudy played both the Sheik and the title role. The two roles were to be his last.

The story is much more polished than its elder brother-story. Moments of comedy punctuate the rather serious-feeling melodrama. Valentino’s overacting is largely—if not entirely—a thing of the past, due no doubt to Valentino’s experience and the touch of director George Fitzmaurice.

Valentino and the writers either don’t understand the complexities of father-son relationships or choose to ignore them completely. I never get the impression that the elder Sheik actually cares at all for his son, despite the arm-around-the-shoulder talk he gives him. Instead, it feels emotionally vapid and as if it were inserted because someone liked the idea of having a split screen image. The chemistry between Banky and Valentino seems solid and largely does keep one interested in what will happen next. 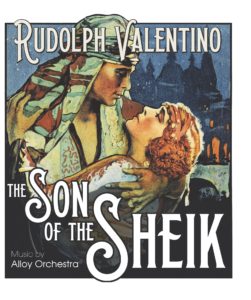 The Blu-ray is an intriguing release. The source material is 35 mm in most instances, but is cropped on both sides, leading to a very slender image. The picture itself is stable in most places and, while not free of dirt or imperfection, is easy to watch. The tints are good and do not over-saturate the image. The titles are clear and stable—and while I wish the original introductory art titles had been used, I understand why they might not have been (as a different composer is credited with the score).

The music by the Alloy Orchestra itself has very tender moments. The rendezvous in the old ruins is largely appropriate. The action scenes contain pieces which give it a distinctly middle-eastern feeling. The Alloy Orchestra does tension and foreboding extremely well, as when the son of the Sheik is about to be ambushed. Forgive me if the following gets a bit too technical, but as a musician, I have a couple of critiques.

With the music provided, the movie’s comedic moments can be almost entirely lost. The scene, for example, when the bad guy is trying to mount a horse and Valentino whistles to make the horse throw the guy off is, to my eyes, a comedic moment (both Valentino and the shorter bad guy are laughing throughout…and Vilma Banky’s character is seen to be smiling), but the music causes the scene to play as if a man is about to be killed. Later in the film, when the shorter of the bad guys is hanging about as a result of Valentino’s escape, the taller one (who got dumped off the horse) calls him “son-of-an-owl” to which the shorter man replies, “My mother wasn’t an owl—only a little cukoo.” But the music loses this comedic moment entirely, even though the two guys are there to provide comedic levity.

The key in which much of the film score is played does not vary often. 80 minutes of film riffing in similar keys for reels at a time makes for exhausting listening. The music, instead of being melody-driven is much more atmospheric—which is not itself a bad scoring decision. There just isn’t a ton of variety in the score and for this reason, I have trouble engaging fully with Alloy’s work on this project.

This release is the finest in picture quality to date. If you are a fan of Valentino or wish to introduce others to his more exotic roles, this is a great disc to own.