SPECIAL EFFECTS WINNER IS A BATTLE OF WITS AT SEA 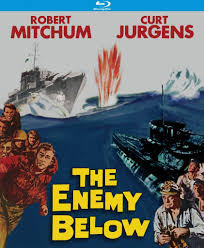 Denys Rayner was a British Naval officer who served on a series of destroyers throughout the World War II’s Battle of the Atlantic, pursuing and targeting German U-boats.  During a military campaign that lasted several years, Rayner took off only a few weeks, total – not even taking survivor’s leave after being on board the HMS Warwick when it was torpedoed in 1944.  Years after his retirement from the Navy, Rayner wrote a novel based on his experiences – “The Enemy Below” (1956).  A year later, it was adapted as a film.  Though the British ship and crew became American in the film, the realism born of Rayner’s own life was transferred successfully to the screen.

Captain Murrell (Robert Mitchum) has, like Rayner, declined his survivor’s leave.  After escaping the destruction of his previous vessel,  he’s been placed in command of the USS Haynes, in the North Atlantic.  Things have been quiet for the Haynes for some time, and Murrell is still new enough to be a stranger to his crew when the ship’s radar spots an unidentified vessel.  It’s a U-boat helmed by Captain von Stolberg (Curt Jurgens).  The bulk of The Enemy Below is a game of cat and mouse in which the ships take turns being predator and prey.  The Haynes subjects the U-boat to a series of depth charges, and there’s also a torpedo attack and some cunning desperate measures in this slow-burning battle of wits.  These are displayed on screen with real skill, leading to The Enemy Below winning an Oscar for Special Effects.  What really drives the film, though, is not the action but the depictions of the two captains.  Both Murrell and Stolberg are shown as smart, capable,courageous and decent men.  This was standard enough in a Hollywood portrayal of an American officer, but a rarer thing  when it came to German officers on screen.  Von Stolberg is a career man, loyal to his ship, his crew, and his commission.  But his view of the Third Reich is another matter.  At one point he tosses a blanket over a German flag.  He glowers at a crew member reading “Mein Kampf”.  Von Stolberg even shares his real feelings about the war with his second in command, his trusted friend Heine (Theodore Bikel):  “There is no honor in this war.  The memories will be ugly even if we win…It’s a bad war.  Its reason is twisted, its purpose is dark.” 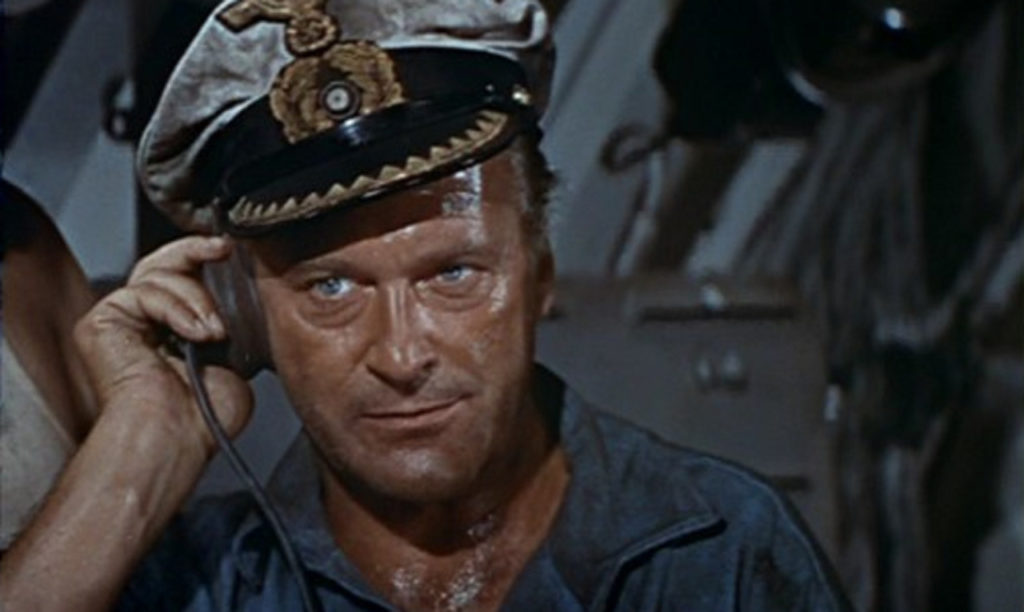 The Haynes was portrayed by the USS Whitehurst, and many of the crew members in the film were actually sailors on the Whitehurst. Those men look comfortable on the gun and depth charge crews because they really were comfortable in those tasks.   Director Dick Powell (better known as an actor) heightens the tension of the conflict by making us believe we are watching real people whose everyday jobs had life and death stakes.

Murrell is equally war weary, having lost his entire family to a German torpedo.  He is skeptical that anyone who has been involved in the war will be able to “get back to our own stuff again”, as the ship’s doctor hopes.  But Mitchum, who was certainly capable of playing dark and cynical characters, makes Murrell neither.  Captain Murrell may be a pessimist regarding humanity’s future, but he’s as committed to his new crew as von Stolberg is to his.  Over time, the two captains gain a grudging respect for each other, while never losing sight of their purpose to destroy each other.  As the film humanizes both crews, suspense mounts over how their encounter will end.

Aside from two great central performances, one of the strengths of The Enemy Below is its naturalism.  The Haynes was portrayed by the USS Whitehurst, and many of the crew members in the film were actually sailors on the Whitehurst. Those men look comfortable on the gun and depth charge crews because they really were comfortable in those tasks.   Director Dick Powell (better known as an actor) heightens the tension of the conflict by making us feel we are watching real people whose everyday jobs had life and death stakes.

Kino-Lorber’s new Blu-ray  of The Enemy Below still shows some of the film’s age:  there are some spots and lines on the movie.  But the colors are sharp and the sound quality is excellent, with a stirring score from Leigh Harline.