Jodie Foster Delivers a Financial Thriller for our Media-Saturated Age 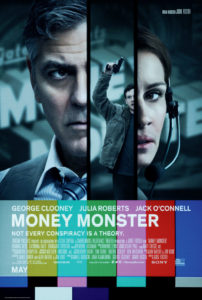 I remember when Julia Roberts was Hollywood’s new It Girl, stealing all of her scenes in Mystic Pizza, then stealing all of Pretty Woman from Richard Gere. I also remember watching George Clooney’s slower ascent from television to leading man. It’s one of the bittersweet aspects of being a movie fan over decades – I’ve seen many film careers rise and fall; some fizzling out, others crashing calamitously. Other actors manage to build careers that last. That category includes Money Monster’s Roberts and Clooney, and its director, Jodie Foster. Foster started as a preternaturally sophisticated child actress and not only managed to keep acting – and keep acting well – into adulthood, but has directed a handful of films stretching back 25 years.

Lee Gates (Clooney) is the flamboyant host of “Money Monster”, a cable network financial show; the sort on which top picks are delivered with flashy graphics and perhaps some dancing girls. Patty Fenn (Julia Roberts) is the show’s producer. She’s grown accustomed to dealing with Gates’s childishness and narcissism, but she’s also weary of it and is  soon leaving to work for another show.

“Money Monster” is a media circus thriller, with Fenn and Gates trying to solve the mystery of the missing money – at first to save Gates life, and eventually because they decide the whole world needs the truth.

The usual mayhem of “Money Monster” is interrupted by the real thing one day, when a man with a gun work his way onto the set. He also has an explosive vest which he puts on Gates. Kyle Budwell (Jack O’Connell) is an ordinary Joe – or was, until he took hostages on live television. Budwell is a delivery man who lost all of his money ($60,000) on a stock tip Gates offered as a sure thing on his show. “Safer than your savings account”, Gates had said, but that particular company ended up losing $800,000,000 of investors money in what its CEO (Dominic West) describes as a computer “glitch”.  Budwell is not buying that as an explanation for the losses and is demanding that someone give an account of what really happened.

It’s easy to spot the real bad guy in Money Monster (hint: it’s not the guy waving the gun around), and there’s never any real suspense over whether Gates and his crew will make it out of the studio alive. Money Monster is a media circus thriller, with Fenn and Gates trying to solve the mystery of the missing money – at first to save Gates life, and eventually because they decide the whole world needs the truth. This all unfolds not only live on television, but with the social media gifs and hashtags that accompany everything happening now. Money Monster is not a perfect movie, in part because several of the major plot turns are easy to spot in advance But Foster keeps the pace tight and the cast are all in good form. Once Roberts moved out of rom-com roles that required her to charm the audience all the time, she was able to show some range, as she does here. O’Connell is fine as a desperate person who has just made the worst decision of his life (and it wasn’t the stock pick). The seemingly trite moment when the police bring in his pregnant girlfriend to plead with him is a stunner and the hinge point in in changing Lee’s perspective on the man who keeps threatening to blow his head off. As for Lee Gates, he shifts from vapid and craven to a much better man in the course of the film. Maybe, like the character in Flannery O’Connor’s “A Good Man Is Hard to Find”, Gates just needed someone there to kill him every moment of his life. 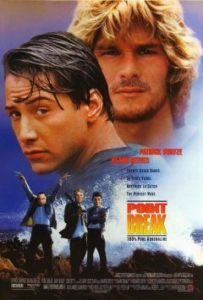 Point Break is not a great movie in any traditional sense of the word. Or maybe it is, because I always have fun watching it. Shouldn’t that be enough sometimes, that a movie gives you a couple of hours of entertainment? Am I laughing at Point Break, or laughing with it? Does it matter? Just two years after Bill and Ted’s Excellent Adventure, Keanu Reeves played an FBI agent (!?!) infiltrating a band of New Agey, surfing, sky-diving bank robbers led by Bohdi (Patrick Swayze). Bodhi spouts the sorts of lines we would expect to hear from Master Shifu in Kung Fu Panda (example: “Fear causes hesitation, and hesitation will cause your worst fears to come true.”). Reeves’ partner is played by Gary Busey. Just consider that acting trifecta: Reeves, Swayze, Busey!  Who could resist that?

Bigelow absolutely knows how to direct action sequence, but every time a character opens his or her mouth something silly falls out. Of course, that’s why the movie still brings me pleasure after all these years.