THE DISAPPEARANCE OF ELEANOR RIGBY: THEM – Film Review

A Hard Look at What Tragedy Does to a Marriage… But Who is to Blame? 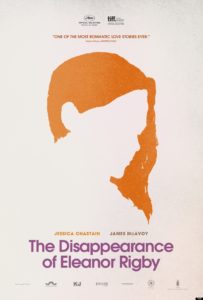 It has been reported that the The Disappearance of Eleanor Rigby made a big impression at the Toronto Film Festival. Ned Benson wrote and directed this, his first full-length feature film,  and turned it into an ambitious three movie project.

All three films are called The Disappearance of Eleanor Rigbybut contain the subtitles of Him, Her, and Them.  Shown as two films at the Toronto Film Festival (Him and Her), Benson follows a married couple as we watch their lives unfold following a tragedy in their lives.  Him is told uniquely from the perspective of the husband, Conor Ludlow, played by James McAvoy (X-Men: Days of Future Passed, The Last King of Scotland).  Her tells the story of his wife, Eleanor Rigby, who is played by Jessica Chastain (Zero Dark Thirty, The Help).  Both versions of these films take you through the same events albeit from each unique perspective.  An ambitious project for sure, especially for one’s first full-length film.

But Ned Benson was able to weave these two versions into one cohesive film subtitled: Them.  It is this version that will be hitting theaters and it is this version that combines elements from both main characters’ points of view without relieving certain scenes over and over.  It simply allows the camera to be a fly on the wall to certain events in this couple’s lives as they seek to live in the dark shadow that has been cast over them.  Never casting judgement, and never seeking to be biased, we are simply privy to the daily struggles of Conor and Eleanor as they ebb and flow in and out of each other’s lives.  The judgement of these two are reserved for the audience, and what they choose to take away from the film.

Conor Ludlow is a man living in the shadow of his father (Ciarán Hinds-There Will Be Blood, Munich), who is a successful restaurant manager, while barely hanging on to his own restaurant which is slowly slipping away due to Conor’s pride and inability to ask his dad for help. Conor is clearly in love with Eleanor but seems to be dealing with their shared tragedy by ignoring his own emotions, and staying disconnected from anyone regarding the incident.

Eleanor Rigby, so named after the famous Beatles’s song by her father (William Hurt-Children of a Lesser God, Dark City) Julian Rigby, is a woman of deep emotion.  We get a sense of the depth of love and humor she can have as we witness a night the couple goes on a date.  The next moment we are gut-punched by the level of despair she exhibits in light of her pain.  It is between these two extremes that the rest of the story is told.

The film dances in an out of certain events and does not always unfold chronologically.  Ned Benson has remarked that he didn’t want to tell the story chronologically, as much create memories for the audience of these characters at different points in the lives that allow you to understand where the film is on the timeline of this couple’s journey.  Little details such as haircuts provide just as much of a clue than anything else.

James McAvoy and Jessica Chastain both bring a lot of heart and emotion to their respective roles.  Much of the beauty in their performances stems from the fact that so much of it is subtle and underplayed so as to allow the heartache of the tragedy to speak louder than their reaction to it at times.  It helps create a sense of realism that very few films have.  Jessica Chastain is the real stand-out and again demonstrates her ability to carry a film of such weight much like she did in Zero Dark Thirty, or The Help.  McAvoy is refreshing as he sheds his blockbuster roles of Professor Xavier of theX-Men series, Wanted, or even The Chronicles of Narnia: The Lion, the Witch, and the Wardrobe, for the smaller dramatic roles he has shined in such as Atonement or The Last King of Scotland.

The Disappearance of Eleanor Rigby: Them also has a wonderful supporting cast.  Besides the always reliable William Hurt and the great character actor Ciarán Hinds, this cast boasts the likes of Viola Davis (The Help, Prisoners), Bill Hader, and Isabelle Huppert (Amour).

That being said, the film will not be for everyone, especially those who have suffered a great loss.  The realistic depictions of the whole spectrum of emotions one goes through in an event such as this is on full display and its realism will possibly reopen some old wounds.  The film also is still about 20 minutes too long despite reducing the over 3 hour run time of Him and Her into the more mainstreamed version of Them.  Also, the lack of resolve or judgment placed on the characters may be hard for those looking for a clear cut solution or resolution at the end. When things begin to break down, audiences long for someone to blame.  This film will not give anyone that.

On the whole, Ned Benson has taken on a monumental task with his first film and has delivered a heartbreakingly beautiful glimpse of two people’s lives in the face of tragedy and their journey to cope with its effects.  His script and ability to craft three separate films from one story is ambitious and lays a great foundation that I am hoping he will build upon.