Does the Latest Paranormal Activity Breathe New Life Into This Tired Series? 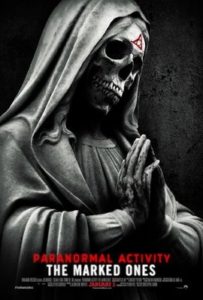 Note: As this is the fifth film in a series, and technically a spin-off, rather than a direct sequel, I will spend a couple of paragraphs catching you up with this series and transitioning into the review itself. I’ve kept the recent review spoiler-free, but by discussing previous installments, there may a couple of spoilers if you haven’t seen the earlier films.

In 2009, Paranormal Activity debuted to such fanfare that is possibly one of the most successful films in history when you consider the cost of producing it with the return it made.  With this kind of profitability, it was inevitable that sequels would follow.

The original Paranormal Activity follows the story of Katie and her boyfriend Micah whose house is being haunted by an evil entity.  The entire film, and series, is based on the “found footage” angle ofThe Blair Witch Project.  We learn that this has happened to Katie before, when she was young, and also involved her sister, Kristi.

Paranormal Activity 2 opened the following year.  This time the spirit is haunting Kristi’s family.  The story is set 2 months prior to the events in the original film.  This sequel ends with Katie (still possessed by the Spirit from the original film) kidnapping her nephew Hunter, with the film’s endnote claiming that their whereabouts were unknown.

For the third film, Paranormal Activity 3, the filmmakers set out to expand the universe a bit, focusing on Katie and Kristi when they were children first encountering the malevolent demon.  Being set in the 1980’s, the director used some creative techniques to make the “found footage” angle plausible.  We also learn that the footage of this film is tied to the videotapes that went missing in Paranormal Activity 2. It is in this film that we learn about a witch’s coven that is in league with Toby, the demon that has been following and terrorizing this family.

The fourth film, Paranormal Activity 4 sought to explain the whereabouts of Katie and Hunter but really did little to move the concept further.  We find the Coven is behind the entire events but get a mixed message on what really happened to Hunter.  A post credit scene sets up a new tale which leads into the latest film in the franchise: Paranormal Activity: The Marked Ones. 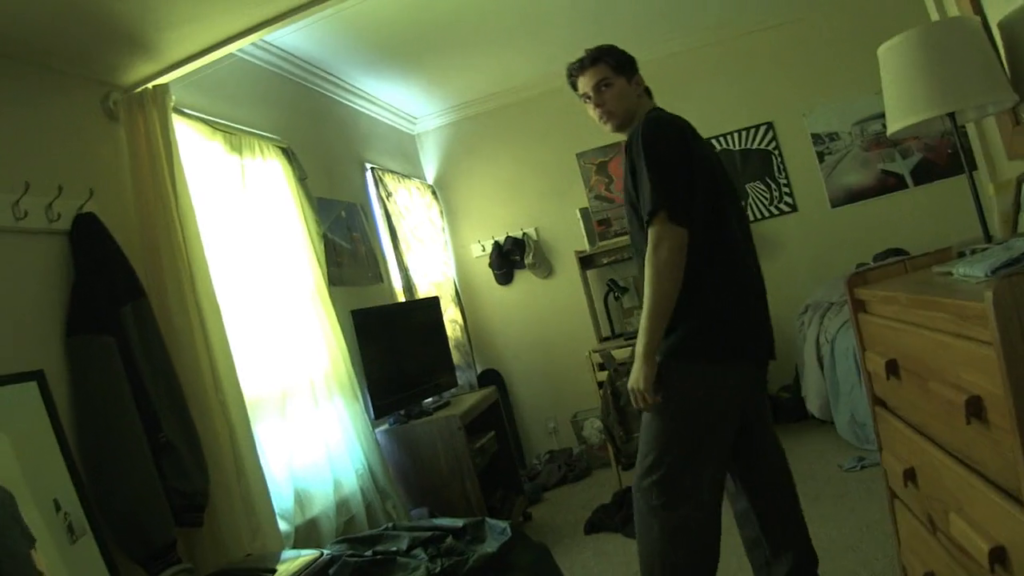 The Marked Ones continues the “found footage” angle but in many ways it is able to infuse the series with a fresh take on this tired medium.  Specifically targeted towards the Hispanic community, The Marked Ones follows Jesse, a recent high school graduate, who lives with his father, sister and grandmother in an apartment that is above a mean woman that many have labeled as a “witch”.  When he has an encounter with this supposed witch, she explains that “things” with him have just begun.  She is later found murdered and Jesse, along with a friend, enter her apartment after the police leave the scene and discover a number of things that connect this installment with the previous ones.

Waking up the next morning with a mysterious bite mark, Jesse begins a transformation that will at first excite him and then terrify him.  Demonic forces are back and we learn more about the witch’s coven who is involved behind the scenes in each of these Paranormal Activity stories.  We also learn more about a group called “the marked ones” that will become more clear in future installments and that may or may not shed light on the true whereabouts of Hunter in Paranormal Activity 5 which is slated for an October 2014 release. 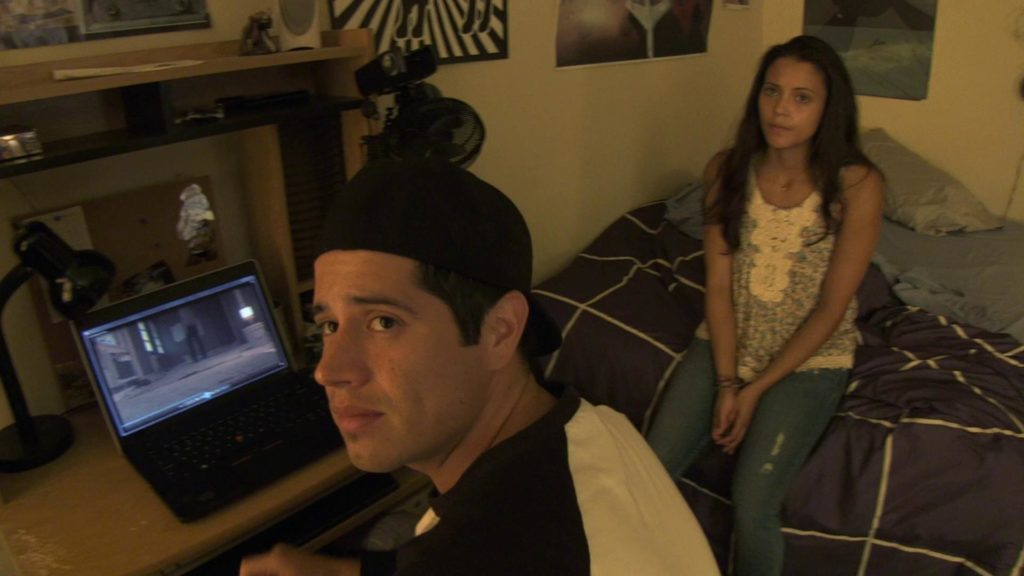 Using more modern technology such as cell phones and pocket sized cameras, it allows the action to be more fluid and mobile than many of the stationary cams present when the action all took place in different parts of the same house in previous installments.  While the marketing targets the Hispanic community, this film is accessible to all groups, and infuses more humor into the film than all of the previous installments combined.

Jesse is a very likable protagonist, and his best friend Hector’s unwavering support of Jesse serves the film some real relatable moments, as well as some heartbreaking ones that will make this entry more accessible to a wider demographic than the previous installments. 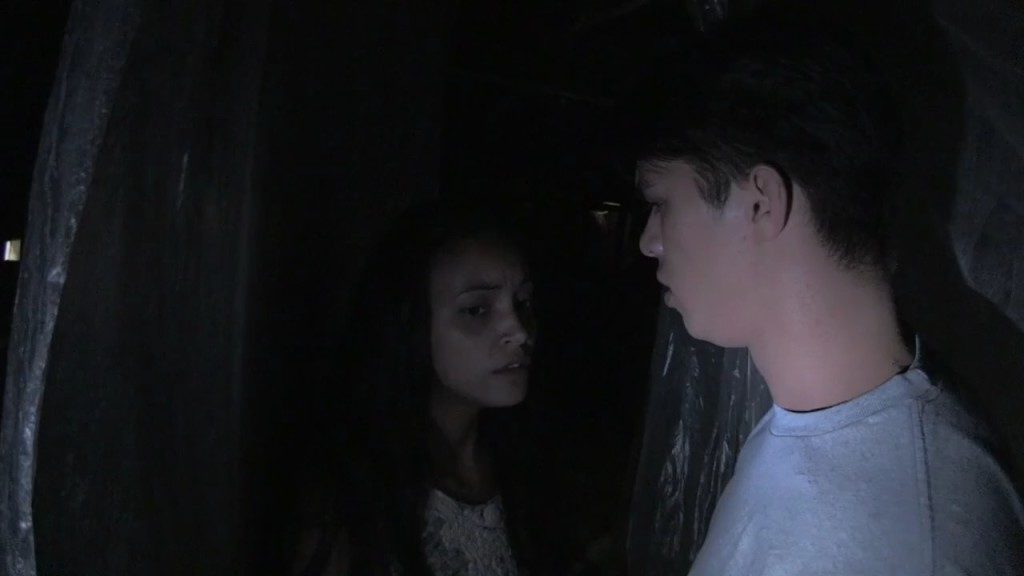 This being said, there are some very weak moments in the film.  Namely, this is evident when the  film seeks to appeal to the core group of 14-18 year old males who will come out to see this by teasing a gratuitous almost-sexual encounter between Jesse and a girl he meets at a party.  Horror films have always tread on this adolescent territory and so, in The Marked Ones, it simply looks staged and exploitive and kind of “thrown in” there.  Also, an unexplained portal, seems thrown in as a means to connect this movie more fully to the original Paranormal Activity.  I won’t say any more about this as it would contain spoilers.

We also learn very little about the witch’s coven that behind all of these events in The Marked Ones and the earlier Paranormal Acitivity films.  This coven keeps growing in numbers and is laughably unstoppable in each installment in which it has been featured.  By not explaining more of their story, or showing any of their weaknesses, they seem very unreal, thus undercutting the events in the film that are meant to be more terrifying.

Despite these weak links, this film is definitely stronger than the very underwhelming Paranormal Activity 4.  It will be a fun experience for those who are already fans of the series providing the audience with a fair share of laughs as well as the usual scares.  There are enough connection points with the earlier installments to have viewers speculating about all of the ways in which this tale is connected with Katie and Hunter.  But like previous installments, answers will have to wait until the next film, which will arrive like clockwork in October.  This is not a great film, but I think it is good enough to keep people coming back for more and thus does its job of reinvigorating a series that was beginning to wear thin.