I love a good heist movie! Clockwork timing, specialists who are masters of their craft, brilliant planning that foresees almost every eventuality, and clever improvising for the times when things go wrong! When the mechanics of a heist are engineered b someone like Steven Soderbergh and powered by the charisma of George Clooney and Brad Pitt, it makes for a sleek and stylish ride that’s a great deal of fun, and has a heck of a lot more under the hood than it lets on.

Gary Ross (Pleasantville) isn’t Soderbergh and Sandra Bullock and Cate Blanchett aren’t Clooney and Pitt but Ocean’s Eight is still a fun caper, even if it’s a little too slight and breezy for its own good.

(Sidenote: Cate Blanchett is awesome, and her performance as Hela in last year’s Thor: Ragnarok was one of the most enjoyable I saw last year- but she’s still no Brad Pitt. Sorry, Cate.) 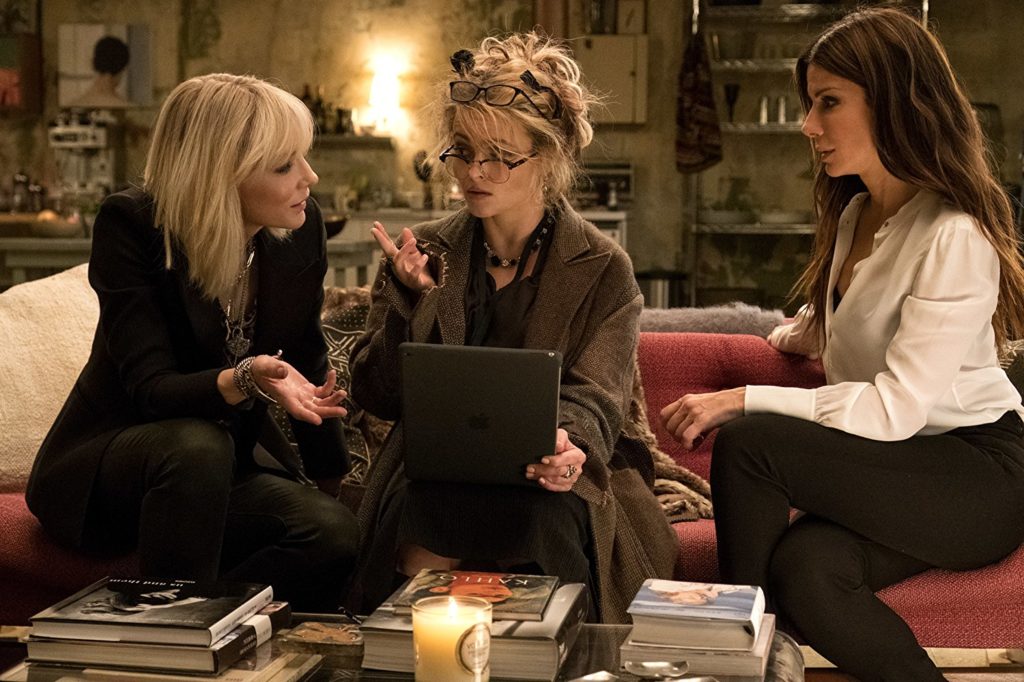 Bullock is Debbie Ocean, sister to Danny Ocean from the previous Ocean’s movies. Debbie’s getting out of jail on parole after having served 5 years for fraud. She was set up by her boyfriend, Claude Becker (Richard Armitage, who played Thorin in the Hobbit trilogy), and has spent those five years giving things a lot of thought. When she gets out, she scams her way into a new wardrobe, a posh hotel room, and starts putting her plan into action. She’s going to rob the Metropolitan Museum of Art in New York, and make a whole lot of money, and she’s going to need a crew to help her do it.

And what a crew they are! In addition to the aforementioned Blanchett, there’s Helena Bonham Carter as an eccentric fashion designer who’s desperate to pay off millions of back taxes, Rihanna as an expert hacker, Mindy Kaling as an expert jewelsmith, Awkwafina as an expert pickpocket and Sarah Paulson who’s the fence. The team is going to con a celebrated, if somewhat vacuous, actress played by Anne Hathaway, into wearing a diamond necklace worth $150,000,000 (that’s a lot of zeros!) to a gala at the Met, where they will steal it, replace it with a fake and collect their shares before anyone’s the wiser. And if Debbie can pin the whole thing on Claude, well so much the sweeter!

Ocean’s Eight is a fun caper, even if it’s a little too slight and breezy for its own good.

So there’s a plan, there’s a target and there’s a mark who can take the fall when all is said and done. Special tools are obtained, the Met is staked out, camera placements are painstakingly observed and the team put in place for the big event. Right before showtime, Debbie gives the team a pep-talk: “Somewhere out there, there’s an eight year-old girl lying in bed, dreaming of becoming a criminal. Do it for her!”

It’s hard to talk about what didn’t work in Ocean’s Eight without dipping into spoiler territory even a little bit. Although I’ll talk in as general terms as I can, consider that a warning if you want to go in to the movie completely innocent. The biggest issue with the movie is, and here’s a spoiler: there is nothing to spoil! There’s a twist that takes us into the third act that, while I guess I didn’t exactly see it coming, wasn’t a huge surprise, nor did it make any difference to the final outcome. Otherwise, the heist, which takes up the bulk of the movie’s second act, proceeds more or less as planned. Danny Ocean’s heists did too, but there at least the audience was led to believe things had gone horribly awry. 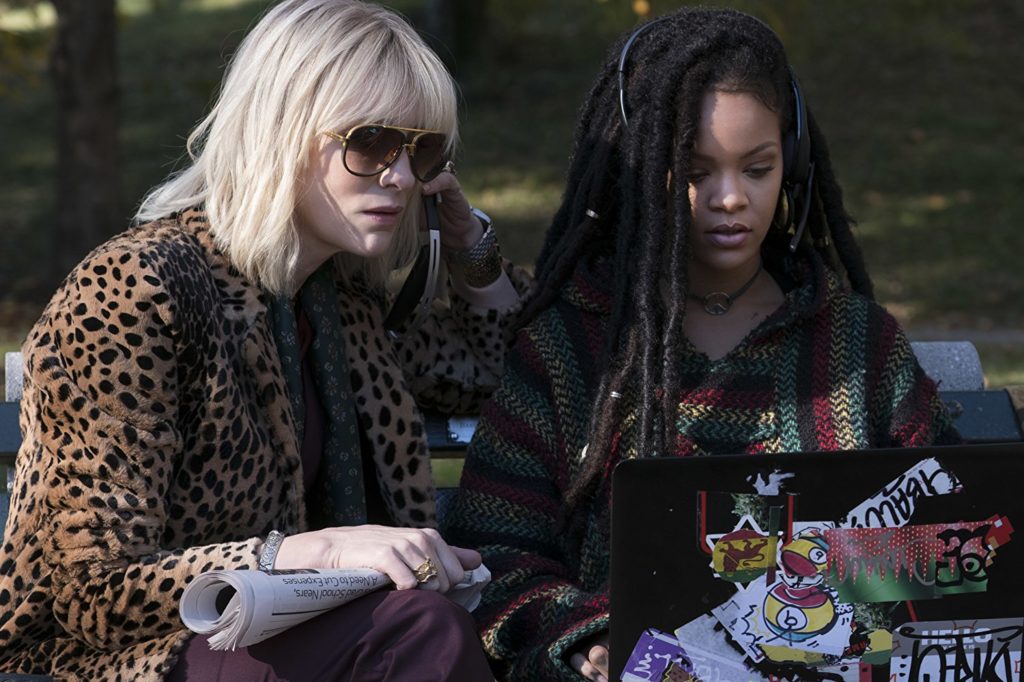 Likewise, there’s a lack of meaningful opposition. Richard Armitage’s character is too underwritten and underplayed to be considered a villain, even if his betrayal of Debbie is what motivates her entire plan (see his turn as Francis Dolarhyde in the third season of Hannibal to see what an effective villain Armitage can be) . In the third act, James Corden (Peter Rabbit) enters the movie as an insurance investigator who quickly identifies Debbie’s presence at the gala, but he too doesn’t have enough presence to be seen as a real threat to the crew.

The Ocean’s movies have been less about the twisted plots and more about the outsized personalities who inhabit them.

But ultimately the Ocean’s movies have been less about the twisted plots and more about the outsized personalities who inhabit them- and that certainly goes all the way back to the Rat Pack’s original. Who cares if things make sense as long as the actors are having a good time, and we’re having a great time watching them. That certainly holds true for Ocean’s Eight. The plotting is thin, and the heist isn’t nearly as clever as it hopes to be, but everyone on Ocean’s crew works well together, and has fun with their larcenous roles. This has always been a film series that ran on star power, and Bullock and her crew provide plenty of wattage for the trip.