A Film With Lots To Say, That Doesn’t Seem To Be Able To Say It 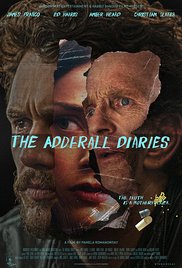 and one full-length film prior to her latest film, The Adderall Diaries.  Her previous feature length film, The Color of Time, boasted an impressive cast of James Franco, Mila Kunis, Zach Braff, Jessica Chastain, and Bruce Campbell.  That film was based on a best selling novel of poems by C.K. Williams.  For The Adderall Diaries, Pamela has found another literally work to base her film on, and again finds a strong cast featuring James Franco (again), Amber Heard, Cynthia Nixon, Ed Harris, and Christian Slater.

The Adderall Diaries is based on the memoir of Stephen Elliot, who is played by James Franco.  In this story, Franco is a writer who is being celebrated for a book that chronicles his rough child hood of having grown up with an abusive father, eventually finding himself homeless before being put into the foster care system.  He is brokering a new book deal through his publicist Jen Davis (Nixon), with a healthy advance being offered.  He is also intrigued by a murder case being covered in the news of a wealthy computer programer, Hans Reiser (Slater) whose wife went missing and is believed to be dead.

Franco attends the trial to find out more about the case and meets New York Times reporter, Lana Edmond (Heard), who feels an immediate kinship to Stephen Elliot.  Both have rough pasts and are trying to discover their worth and identity despite their surface level accomplishments in their professional lives.  Elliot is also supported by his childhood friend Roger (Jim Parrack). The main conflict of this story comes as Stephen is reading excerpts of his book for an audience, closing out the story with his father’s death and the lack of closure he had as a result.  Things are shaken up when a man calls him out at this book reading, and turns out to be his father.  With this one event, Stephen’s successful exterior and the stories he has been telling himself, and his readers, comes into question and begins a journey of rediscovery with often painful consequences.

The question at the heart of the internal conflict Stephen is facing, as his book deals begin to crumble in the face of the accusations that he made it all up, is one of perception.  Do we all self edit our memories?  Do we tend to question the motives and ways others remember the events we share but not hold our own recollections to the same objective standards?  How does this shape our “truth” and worldview?  Does it cause us to be the victim or the perpetrator of the events that have shaped us….especially the traumatic ones?

Franco plays this one straight, much like his role in True Story.  His character is also suffering from writer’s block and falls back on an Adderall addiction to spark his inspiration, and it provides us the title of the film/book.  He also tends to view every event that he encounters through the lens of his relationship with his father. This is especially seen as he covers the murder trial of Hans Reiser, whose main defense is his relationship with his kids.

The film itself tries to be a tragic romantic tale between Stephen Elliot and Lana Edmond, while also exploring the self-destructive tendencies Stephen Elliot demonstrates with all of his relationships.

From his best friend Roger, his publicist Jen Davis, to the countless one-night stands he experiences.  These tendencies are especially on full-display when he is dealing with his father. 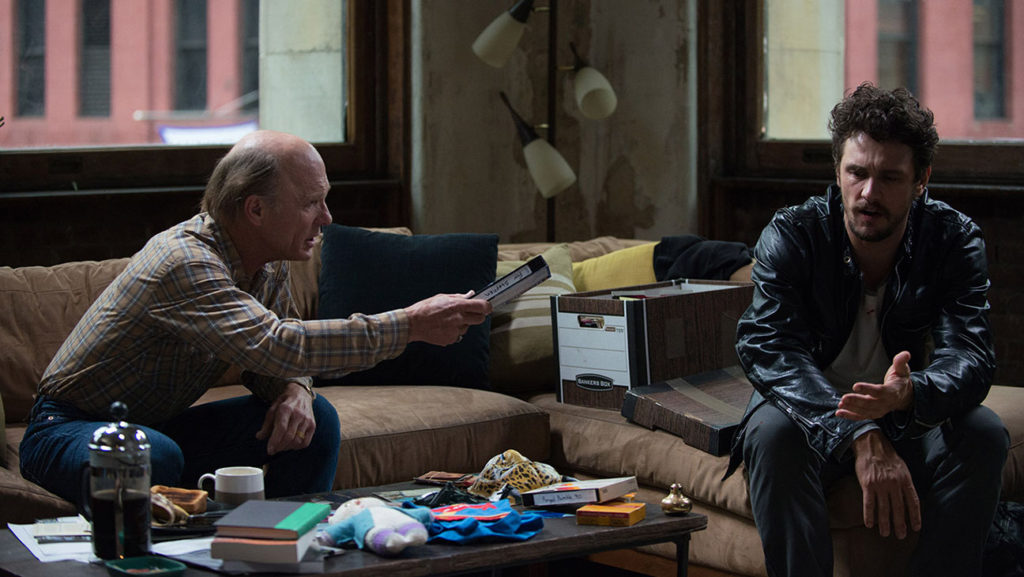 Ed Harris steals every scene he is in, causing the film to lose some of its momentum when the narrative shifts away from their main conflict.  It also provides the film its heart and its strength as Franco and Harris finally meet and must resolve the pain that has driven them apart for so much of their lives.

The Adderall Diaries has a lot to say, but doesn’t know quite what type of film it ultimately wants to be in order to most effectively say it.  Is it a true crime story of a writer trying to kick his writer’s block much like Truman Capote did in covering a murder trial?  Is it a tragic redemptive romantic film about two lost souls trying to find healing through their relationship with each other? Is it a psychological exposé of the way we skew the way we remember the events of our lives and how it shapes us?  All of these are present in the film, but the screenplay doesn’t allow for the film to truly commit to any of these ideas fully.

The film has something important to say, but will find a very small audience to say it to.  Director Pamela Romanwsky demonstrates enough competence to justify future attempts to share her love of autobiographical-based literary works through the world of film.  It is just that nothing ultimately stands out in this effort that would justify it earning any more praise than a collective shrug, despite the accolades being provided the book it is based on.  This may be a case where the book is worth the read over the time to watch the movie.