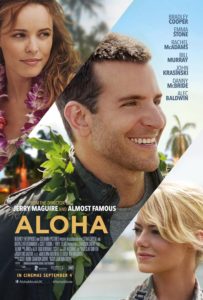 You say goodbye, I say hello….

Such was the case going into Cameron Crowe’s latest romantic comedy Aloha, a promising package of Bradley Cooper falling in love with Emma Stone in Hawaii. While Crowe himself, a wide-eyed music enthusiest who can’t resist needle-dropping the best classic rock in every one of his movies, would no doubt approve of the Beatles‘ tune referenced in the opening of this review, it must be said that he’d be doing so on the way out the door. After all, they say that “Aloha” means both “hello” and “goodbye”. We go in wanting greet such a film with open arms and a flowered lei, but instead are met with a shuffling-off mess of a film. Sorry folks, Cameron Crowe has left the building.

As a Cameron Crowe fan, it’s genuinely sad to say that. In the past, I’ve seen fit to go easy on Crowe, even when he’s clearly been teetering outside of his comfort zone of old school schmalz with a does of reality. Even when he’s not at his best, his artistic voice has been a refreshingly rare one, a positive one. He shamelessly loves what he loves with the kind of gleeful abandon usually relegated to young boys and excitable rock critics (both of which he once was). When Crowe is in his zone, no one does it better. (Say Anything, Almost Famous, Pearl Jam Twenty) But it’s an easy mark to miss, and when he fails to stick the landing, the response has been especially vicious. (Vanilla Sky, Elizabethtown, We Bought A Zoo) Up until Aloha, Crowe’s well-meaning sentiment, coupled with an affection for what matters most, has carried even his most iffy of efforts. 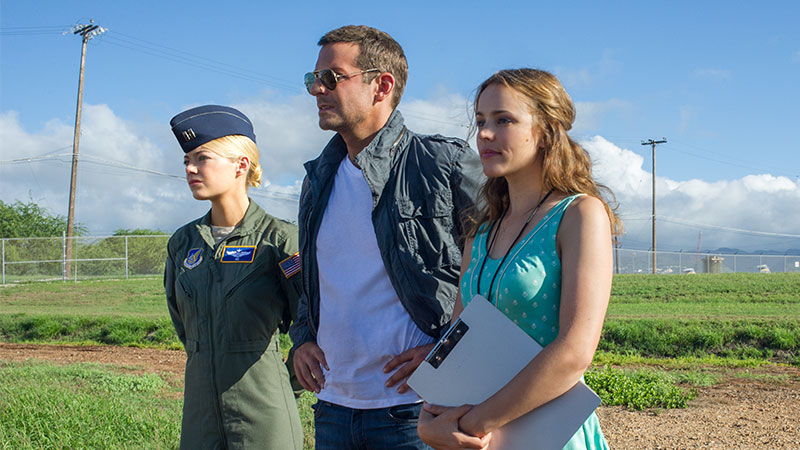 Alas, what we’ve got this time is a standard issue exotic-locale rom-com, but with elevated aspirations, as it’s also bearing the contemporary bent of demystifying said locale. It wants to be witty and detatched, realistic and concerned. Yet, at the same time, Aloha has its head in the clouds, hopelessly hung up on traditional romanticizing of the native culture, the hula, and more importantly, the sky, that clumsily drives the movie. Don’t miss the point – we have to keep the sky clean! In the course of it, our protagonist will have to face down an evil satellite in a climax hijacked from an early Bond film. Not exactly nailbiting stuff by today’s standards, but hey, this is Hawaii. 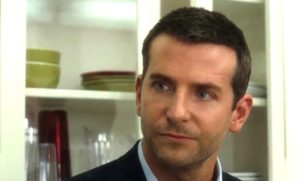 It must be said that Aloha is done no favors by the existence of the Alexander Payne movie The Descendants, a far better street-level look at real life in this supposedly lazy paradise of the Pacific. Where Payne is able to walk the line of relatable amid the exotic, Crowe runs away from the former to rhapsodize the latter. But he doesn’t want to be rhapsodizing, but he’s not apologizing either. But hey! Isn’t the sky above Hawaii mystical? Pure? Sacred? Yes it is!, he tells us. Over and over again. It’s enough to hang a plot on, but not a love affair.

Unfortunately, for “Aloha”, it’s the love affair that matters. When Emma Stone, who’s been immediately, madly crushing on Cooper, lectures him on the majesty of “the sky!”, the scene becomes not just the longest car ride in movie history, but the most cringe-inducing moment of their careers.

But, we knew this trip was doomed from the start. Nevermind the advance warning inadvertantly provided by Sony itself, thanks to the notorious email hack months ago (I haven’t gone digging in that ditch, so I’ll say no more about it), Aloha has a serious “first 10 minutes” problem. Meaning, the vital first ten minutes of the film, the time in which the vibe of any movie is typically established and the viewer is supposed to be reeled in, are rambling full of gravel. Immediately, we’re hit with an unending montage of Cooper’s backstory, a pedestriain connect-the-dots of mundanity. Finally, we’re told, after many years, he’s back in Hawaii, on the payroll of a wealthy eccentric (Bill Murray, clearly on a working vacation) who’s looking to launch a satellite. Don’t yawn too wide, a tropical bug might fly in.

Yet, for all the information, time, and morbid details devoted to Cooper, (who, along with everyone, is trying the best they can to get through this unscathed,) Stone’s intro is the polar opposite, consisting of a wordless, single shot: Her military character in a shapeless flight-suit, hair pulled back, rigidly checks in for duty. She sharply zips her suit a little with a head cok, and then a salute. And just like that, we have all we need to know about the latest Cameron Crowe dream-girl. The fact that she has the better, more filmicly effective introduction is undercut by the obvious priority given to Cooper’s, even as his is done all wrong.

But let’s face it, the single most unbelievable thing about Aloha has to be the sheer romantic disinterest that Cooper’s detatched character has in Stone, even as she’s all but throwing herself at him. Soon, her hair comes down, she wears civilain clothes, her trademark radience peeks through. Eventually, at the one hour mark, he can no longer resist. Just long enough for the standard rom-com relationship pot-hole that has to come along. It allows Crowe to replay one his greatest hits, the sunglasses scene from Jerry Maguire. Albiet, clunkier. 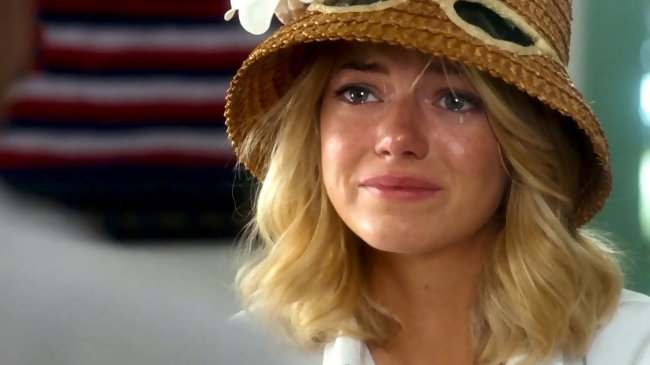 It gets worse. Aloha burdens itself with having to say something “Important”, as, oddly enough, it joins Brad Bird’s Tomorrowland as the second film in so many weeks with a concerned throughline about the slippery-slope consequences of what happens when billionaire venture capitalists rush to fill the space exploration void left by the now-grounded NASA. Wait, what?

With Crowe allowing his usual strengths to take a backseat to geo political simplicities, Aloha is trying to coast on the previously established charm of its cast. Rachel McAdams is busy on the periphery as Cooper’s years-ago ex, and it must be said that John Krasinski (The Office) shares the film’s single highlight, a moment great enough for one to lament its wasted inclusion in this film.

Aloha is an attractive luau of zero sustinence and immediate remorse, posturingly looking to roast “the American pig”, never realizing that that’s exactly what it is. Just as any shirt you buy in Hawaii is actually a Hawaiian shirt, this is a Hawaiian movie. But Aloha is one trip to the islands that’s no vacation.