Quake Film Doesn’t Shake Up the Formula, But Its Got Plenty of Action 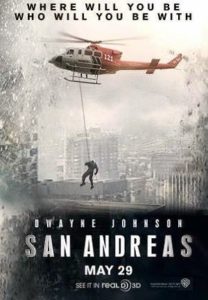 San Andreas, the new earthquake movie directed by Brad Peyton and starring Dwayne Johnson, opens with a bang, or rather a crash. The world’s most deserving car accident victim (trust me on this one) is forced off a steep mountain road by a rock slide and finds herself tumbling over and over – strapped inside her car, fortunately – until the car is lodged on a tree branch, on the side of a steep gorge. The use of 3D in this brief scene is impressive, prompting my movie watching companion to turn to me and whisper, “Well done!” at the end of it.

This opener lets the viewer know that San Andreas is not going to skimp on action or effects. It also introduces Ray (Johnson), a rescue pilot with the fire department, in his attempt to save the trapped young driver from a seemingly impossible situation. Will he succeed? What do you think? He’s got to the be the kind of guy who can convincingly deliver lines like, “Let’s go get our daughter!” after the largest earthquake in recorded history, without us doubting for a moment that he’s up to the task.

Ray is strong, brave, good, and not especially fond of sharing his feelings. We get this character sketch out of the way quickly, as he tries to adjust to the news that his estranged wife, Emma (Carol Gugino) and college-aged daughter, Blake (Alexandra Daddario), are prepping to move in with Emma’s new boyfriend – real estate mogul Daniel (Ioan Gruffudd). Ray’s plan to drive his daughter back to college is interrupted by news of a quake in Las Vegas – unfortunately far from the last in the “seismic swarm” that is about to set off the entire San Andreas fault. 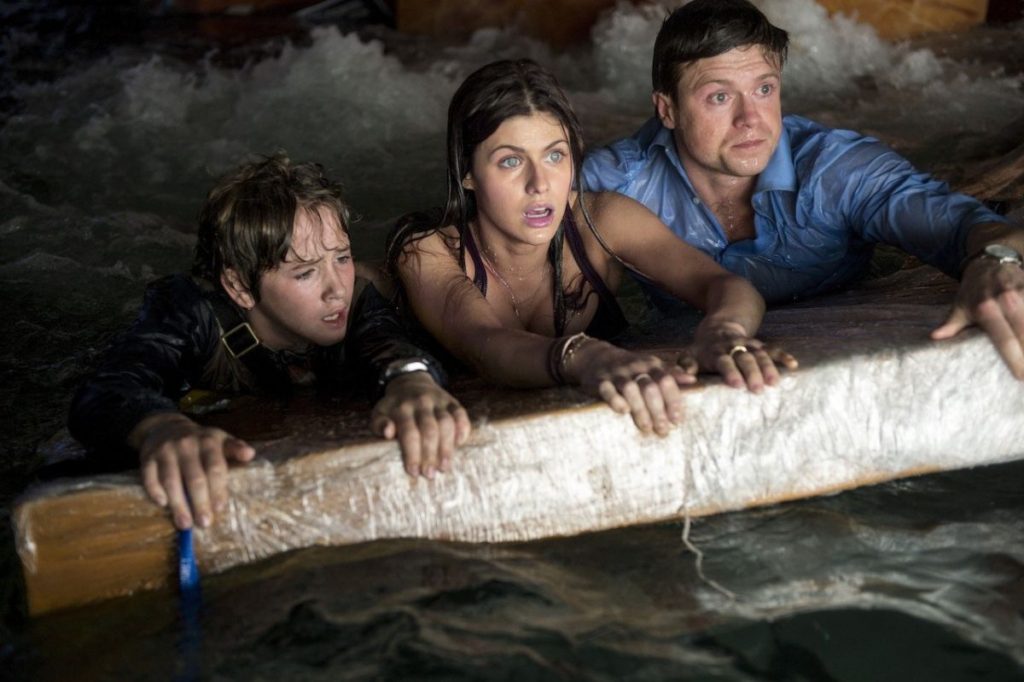 To state the obvious, disaster movies tend to be a bit formulaic. There must be mass destruction and countless lives must be lost. The audience really only cares about a few people, though – and in this case I’ve already mentioned most of them. Typically, one of the central characters will turn out to be a self-serving jerk who cares only about his own life and therefore deserves what’s coming. I won’t tell you which character that is in San Andreas. I don’t need to:  you’ll figure it out quickly enough. Ideally, you should also have a scientist who has been trying to warn of this disaster and has only met with scorn or disbelief. In this case, the role of the scientist is played by Paul Giamatti as a Caltech seismologist, though in fairness to the skeptics there’s almost no lag time between his prediction of these uber-quakes and their arrival.

What is also critical in disaster movies is that the central characters must not simply survive while those around them do not, but that they must survive over and over again, often in implausible scenarios. Check!

While Ray is initially safe in his copter as the quakes smash Los Angeles, his wife is in an L.A. Skyscraper, dining with Daniel’s supercilious sister. You can bet that building will be flattened and Emma will have a doozey of a time reaching Ray (who was conveniently chatting on the phone with her when the quake hit). Meanwhile, when the next quake his San Francisco, Blake is there with Daniel. They will be trapped in a parking garage in short order – and that’s only the beginning of the perils that this family will endure (along with two English brothers who befriended Blake about ten minutes ago, but who are now willing to risk their lives for her). 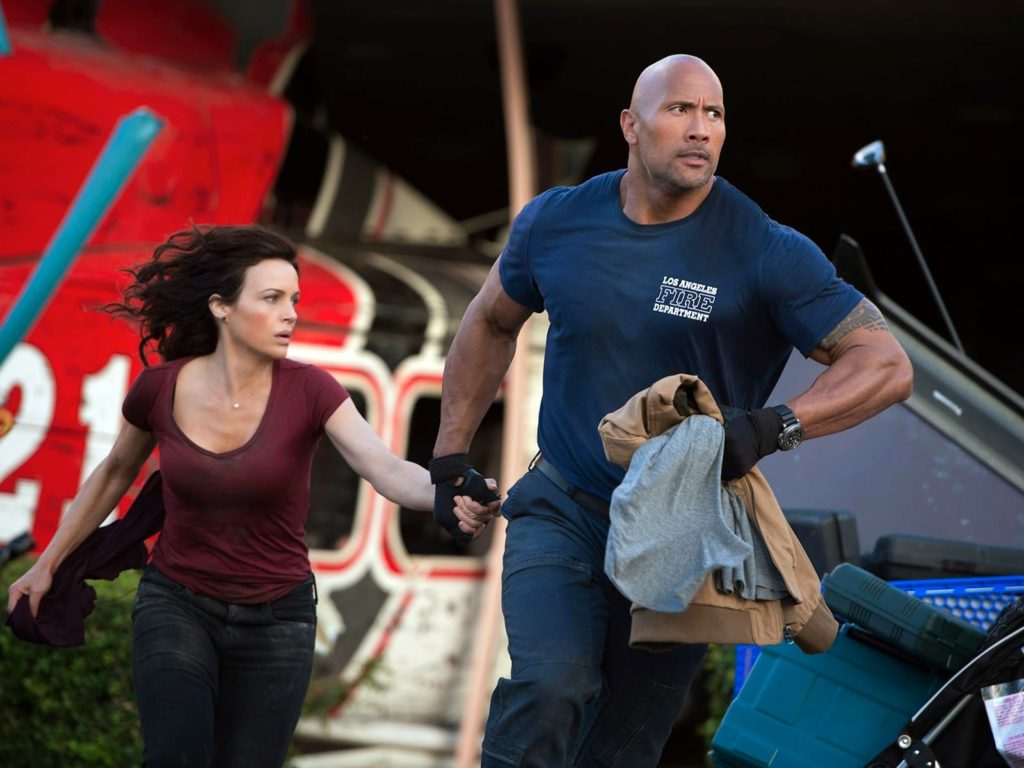 If I sound like I’m mocking San Andrea, I assure you that I’m not. I like disaster movies:  I respect the formula and think San Andreas pulls it off better than most recent entries in the genre. The sweeping shots of L.A. and San Francisco are lovely to look at. The shots that follow, of the earth rolling and huge structures collapsing, are well executed. The lead actors are solid enough for the dialogue required in such films (you know, lines like, “Don’t you quit on me!”), and I even appreciate that Blake turns out to be more than a damsel in distress. She is initially rescued by the British brothers, Ben and Ollie (Hugo Johnstone-Burt and Art Parkinson), but soon enough she’s rescuing them. Blake’s firefighter dad has prepared her well for such situations.

Funny thing about disaster movies, though. It is, as I say, the destruction which we tend to enjoy – those of us who will admit to enjoying them at all. And I confess that it’s unsettling to watch an earthquake movie on those terms, just a month after a quake killed nearly 9,000 people in Nepal. As I watched, I found myself wondering what someone who just lost their home or loved one in Nepal would think about our appetite for destruction. Is it dehumanizing to get a bit of a rush over watching tiny CGI figures falling to their deaths from the Golden Gate Bridge, or being smashed by falling concrete? 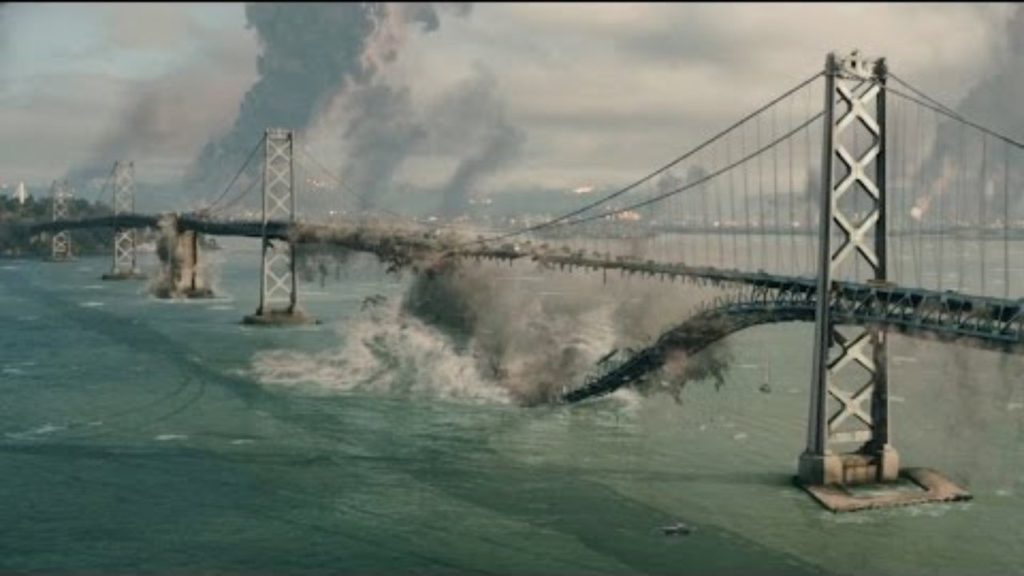 I have to assume that we are drawn to disaster movies as we are drawn to horror films – in part because we need to go through terrible things vicariously. We don’t watch them because we’ve forgotten that real disasters involving real people happen all around the globe – but because we know that they do.  We realize that next time it might be not be Nepal, or Joplin, or New Orleans, but our homes.  We need the catharsis of seeing our worst fears played out in ways that are ultimately safe for us. And of course, we don’t identify with the nameless hordes who die in such movies; but with the resourceful, plucky and insanely lucky survivors.  That would be us, somehow, if it came down to it – or so we tell ourselves.  And rather than being paralyzed by shock and trauma, in the end we’d embrace our loved ones and simply say, “Now we rebuild,” as Ray does in the wake of the total devastation of California. It’s not a spoiler to tell you that he not only survives but thrives, because that’s how these films work:  and also, he’s The Rock.

San Andreas does not reinvent the genre. It doesn’t even bend it. It is a big, non-stop, reassuringly crafted example of exactly what we expect in such films. That may not make it a great movie, but it’s no disaster.