LET THE SUNSHINE IN – Film Review 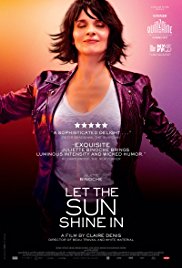 When much of the world met Juliette Binoche, she was a ray of sunshine.  Her part in Kieslowski’s Blue (1993) was a revelation for art house filmgoers, though her radiance shone through for the mainstream with the Oscar winning The English Patient (1996). For that, the Academy of Motion Picture Arts and Sciences let the sunshine in on a Best Actress in a Supporting Role award.

Not that those films are particularly bright and cheery, but youthful Binoche’s own personal je ne sais quoi nevertheless lit up silver screen crushes beyond her native France, where she’d already been established.

Of course, though, the filmography of any bold, respected, international star cannot be all sunlight and statuettes.  The fog has most certainly rolled throughout her filmography, well beyond the literal depiction in Olivier Assayas’ Clouds of Sils Maria (2014).

Let the Sunshine In is a dramatic film directed by Claire Denis (Beau Travail, 35 Shots of Rum), one of the most noteworthy and underrated auteurs currently working. Denis has consistently displayed little obvious regard for the sub-genre her gender is most often pigeonholed into, the “romantic chick flick“. Despite this film’s poster, with a shiny, buoyant and confident Binoche frolicking before a Pinterest-ready colorful sky, this is not the art house version of one of those movies. 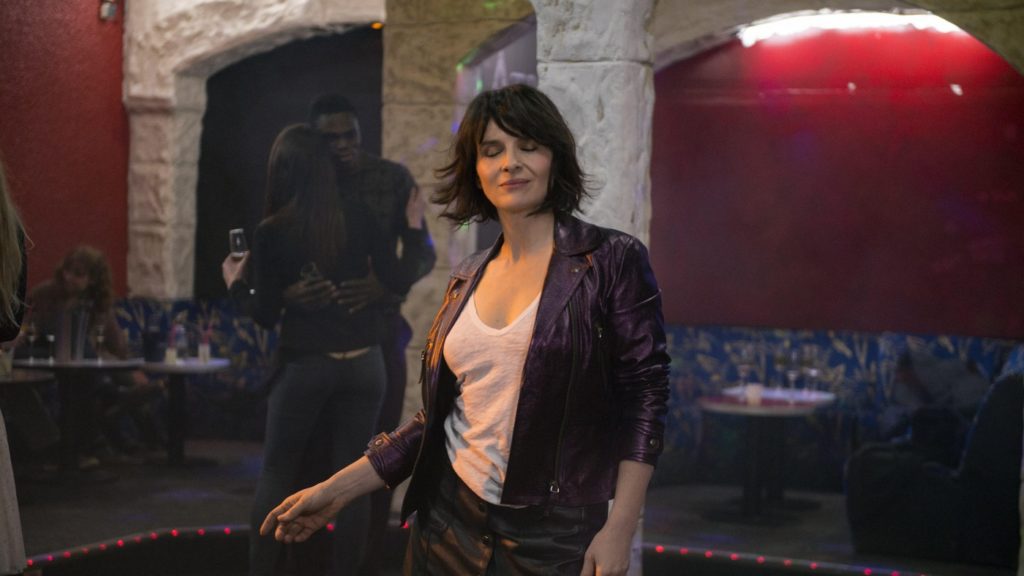 Denis, ever happy to provoke, even to jolt audiences with blunt truths, holds back almost nothing as the first shot of Sunshine is looking down at the main character, an already weary Isabelle, laying on a bed, naked and staring off to who-knows-where.  But this moment isn’t the end of any specific activity so much as the prelude.  An undressed man climbs onto her, and lovemaking begins.  Pure, diluted, joyless, miserable lovemaking- the kind that can render the term “lovemaking” a hideous misnomer.

Ugh, that’s done… We learn that her “lover”, Vincent (Xavier Beauvois) is a big-deal banker and subsequently, more than a little full of himself.  The way he paws at her and foists himself onto her, forever treating her like his plaything and nothing more, has taken its toll before the story even started.

Though based upon a book by Roland Barthes, these are some of the many sensitive moments that only a competent female director could communicate in such an immediate yet also passing manner.  Let the Sunshine In isn’t necessarily about these moments at all, yet in a way, it completely is. 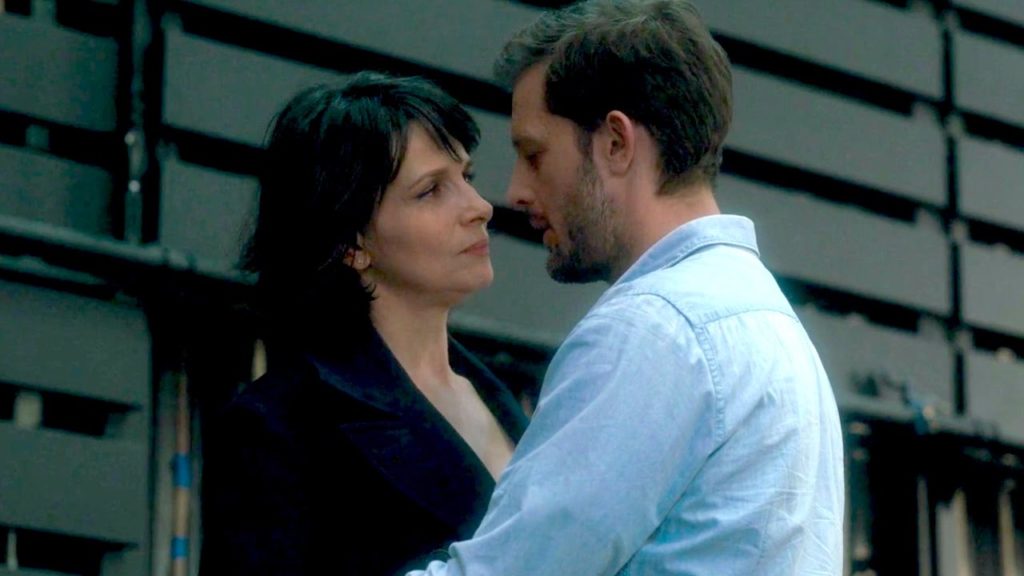 Claire Denis has much patience with her protagonist, something that wouldn’t be true of everyone, as there’s something else about Isabelle… she’s “the other woman” in the aforementioned relationship.  Vincent is married, and has no intention of walking away from that… nor Isabelle.

Denis paints the loose and wandering story of Isabelle with the dismal empathy and arms-length femininity put forth by a Lana Del Rey song.  Though undoubtedly feminist, don’t expect any given strong woman protagonist of a Claire Denis film to belt out, “Je suis femme, entendez-moi rugir!”  More likely is the French spin on the wounded headspace of Del Rey’s “The Other Woman”:

The other woman will always cry herself to sleep

The other woman will never have his love to keep

And as the years go by, the other woman

Will spend her life alone 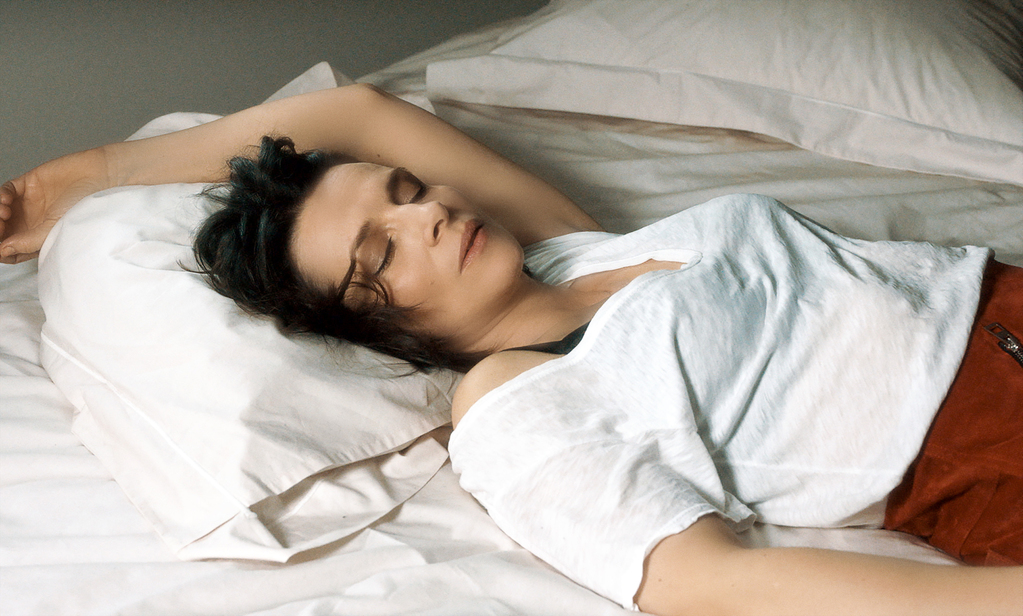 A quick backtrack… is someone like Isebelle truly worth labeling as “a strong woman protagonist”?  She spends this plotless movie drifting about Paris, trying to be rid of the relentless Vincent, and towards other men and in soul-searching conversations about all of it.  Her mood fluctuates with her whims, never entirely certain of what she wants.

Yet, as portrayed by Binoche, this makes for a most interesting watch.  Her complex soul is bare from moment one, and her director (also co-screenwriter, along with Christine Angot) carries us through her survivor’s headspace.  Let the Sunshine In may not even pass the Bechdel test (too much talk about men), but she is indeed a most strongly realized character, if not what we default to these days as an image of “a strong female protagonist”.

For many of us, it’s tempting, even irresistible, to diagnose and/or psychoanalyze such characters.  Denis beats us to the punch, sort of, by ending her film with a prolonged two-hander of a scene between two French film icons, Binoche and late arrival Gérard Depardieu.  Adding a potential meta layer to it all, his name is “Denis”.  Their office chat goes on so long that the closing credits roll over it.

Let the Sunshine In is a tightly controlled vision of someone else’s lack of control.  Denis never judges Isabelle for her life, and nor should we.  There isn’t a lot of titular sunshine to be found, but the film leaves room for some, should the opportunity arise.  But then again, we already know that Juliette Binoche carries her sunshine with her, even when embodying characters as adrift as this one.