Does It Rise As High As the Clouds It’s Named For? 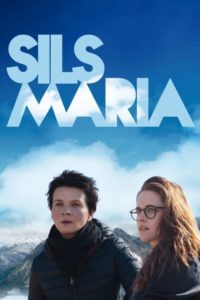 In The Clouds of Sils Maria, Juliette Binoche (Words and Pictures, Dan in Real Life) stars as Maria Enders, a middle-aged actress, who is on her way to Switzerland, along with her personal assistant Valentine (Kristen Stewart-Camp X-Ray, Still Alice, Twilight Saga) to give an achievement award to her dear friend. Her friend is the playwright whose play “Maloja Snake” was turned into a film adaptation that launched Maria’s career.

A hot director is ready to reboot the classic “Maloja Snake” and wants Maria to join the new film about a young and driven employee who seduces her lesbian boss, eventually driving her to suicide.  Only this time, instead of playing the young employee, Maria will be cast as the aging boss and Jo-Ann Ellis (Chloë Grace Moretz-Kick-Ass, The Equilizer) will be the young star. Retreating to her friend’s Swiss mountain home, following his death, in order to rehearse for her part, Maria tries to come to grips with the harsh realities she is facing in accepting this new role.

Maria has always identified with the young role in Maloja Snake despite having gone on to make multiple box office smashes since then.  The drive of her young character mirrored her own as she found herself catapulted to stardom from the role.  Despite aging, Maria continues to identify with the character she played as a nearly 20 year-old, even though she acknowledges the late 40’s reality she is in, with the wisdom that only comes through age and experience. 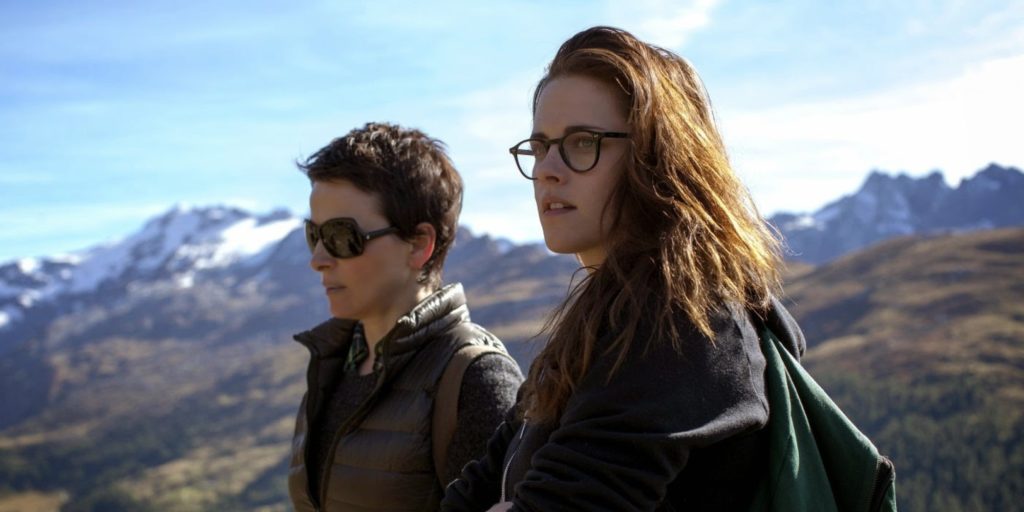 As she bounces her feelings off of her assistant, Valentine, about not feeling comfortable taking on the older role of the doomed-employer, she realizes that her values of connection to character, and dedication to her craft, has been replaced in Hollywood with a desire for fame, for it’s own sake.  Her assistant idolizes the “brilliance” of the up-and-coming Jo-Ann Ellis, who is more known for her off camera antics than for the roles she plays, and seems to confirm to Maria what is wrong with the Hollywood machine she once embraced.

Through the rehearsal for Maria’s new role, and her tendency to fall back into her instinct to continue to identify with the young Maloja Snake role she once played, The Clouds of Sils Maria depicts a psychological struggle that exists within all of us.  As we age, we continue to wrestle with being who we once were, and helplessly watching as another generation arises to replace us.  Maria remarks that both roles in Maloja Snake are really the same person, and in the same way, we are both the same person despite being two different roles: our younger self, and our current self. 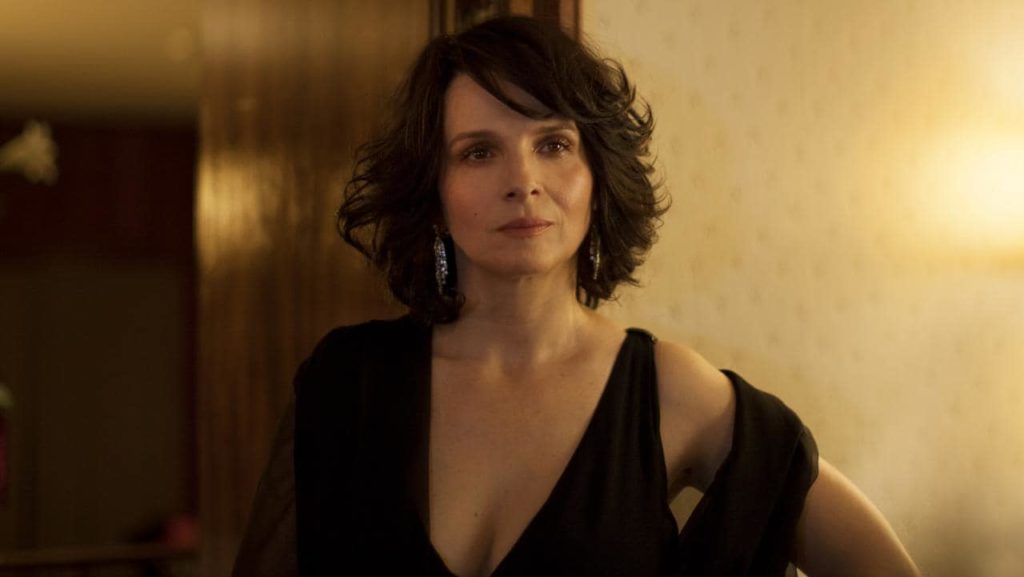 The Clouds of Sils Maria is acted brilliantly by Juliette Binoche, who continues to choose characters who have conflicting emotions as they struggle with their place in life.  The isolated Swiss mountain-top location above the clouds serves as both a symbolic locale and a beautiful place to watch someone begin their slow fade.

The film moves slowly, yet methodically, as it deals with aging, the psychological struggle of our own duality as we previously mentioned, and a biting commentary of the current Hollywood obsession with youth and fame above substance and meaning.

Kristen Stewart is provided a great role to simultaneously lampoon the superficiality that fueled her own Vampire-Warewolf rise to fame, while being a reflection of the current youth movement in Hollywood and their disconnect to the generation that preceded them.  Despite this role, she continues to be somewhat of a stiff presence, especially in contrast to Binoche who runs circles around her in each scene. 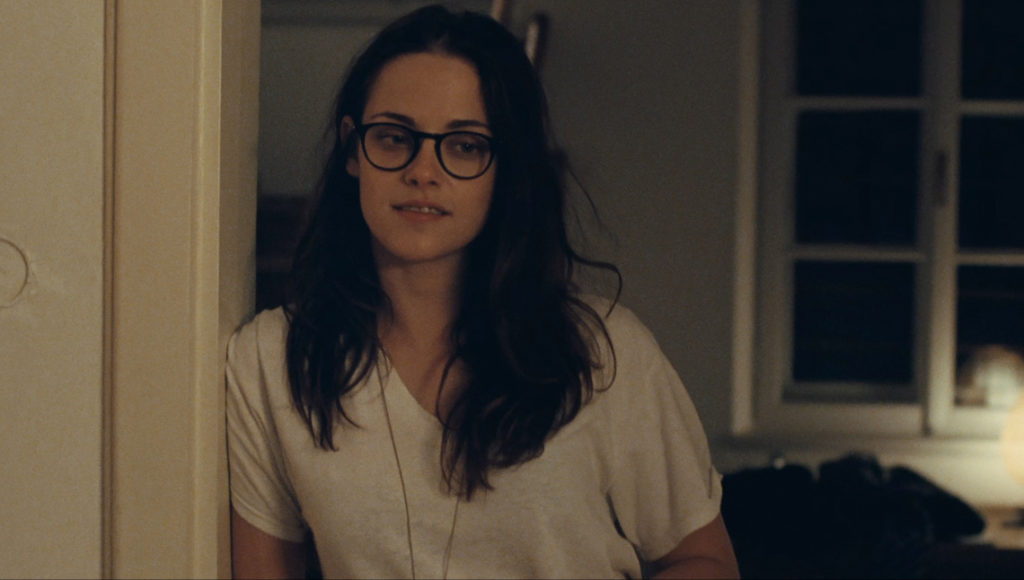 In many ways, Stewart’s performance further solidifies the political point her character is meant to express about the superficiality of modern Hollywood.  For this reason, one might be inclined to praise her performance as “mission accomplished”.  I still continue to simply see a girl who is continuing to find herself in many critically acclaimed films (Camp X-Ray, Still Alice, etc.) while having no business being in any of them. She is wisely surrounding herself with strong veteran performers which helps cover a multitude of her sins, but can’t fully pardon them either.  One hopes that one day she might be humble enough to learn from the likes of Juliette Binoche and Julianne Moore, instead of letting her permanent scowl represent the entitlement generation she is a member of.

Chloë Grace Moretz fully embodies the superficial Jo-Ann Ellis and infuses her with everything that is wrong with the fame-seeking generation of Hollywood that is more content to stay in the news for all the wrong reasons if it only extends their 15 minutes of fame for another moment.  This is either strong acting, or simply acting naturally, given that she is fact the age that is being skewered in the film’s subversive commentary.

While the film contains a great story, multiple-layers, a strong lead, beautiful cinematography and competent direction from Olivier Assayas, it still doesn’t rise as high as the beautiful clouds of Sils Maria, Switzerland.  The pacing, and the casting of Stewart and Moretz, leave the audience too often looking at their watch instead of basking in the complexity of Binoche’s role and her beautiful execution of the struggle we are all experiencing through aging.  So this is a solid, but ultimately lacking film, that ironically will see its main point about spectacle trumping all else in modern-day Hollywood be fulfilled as The Avengers: The Age of Ultron wipes the memory of this film from anyone’s radar.