Is This a Train That Is Going Anywhere? 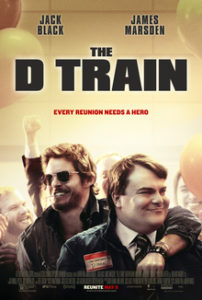 The D-Train, the title of the new Jack Black film, serves as a double-meaning for this social commentary on how we can find ourselves stuck in our old high school social classes.  On one hand, “D-Train” is the name Dan Landsman (Jack Black) is trying to give himself, as he continues to try to impress his former high school peers whom he works with as a part of the reunion committee.  This name, as well as countless others that all take the form of “the D-something”, never find their way into the collective conscience of his peers.  It actually continues to drive  people away, as his own reunion committee fakes going home each night that they meet so as not to have Dan join them for drinks afterwards.

Dan’s home life is not as pathetic as his relationship with former high school classmates.  His wife Stacey (Kathryn Hahn) absolutely adores him and has no clue that he wasn’t loved in high school, or that he quite hasn’t gotten over that. She is unaware that he is unhappy at work where he has stayed for years out of loyalty to his boss Bill Shurmur (Jeffrey Tambor).

One night while watching late-night television, Dan sees former popular classmate Oliver Lawless on a national “Banana Boat” advertisement.  Believing Oliver has hit it big as an actor, Dan concocts an elaborate scheme to get Oliver to commit to coming to the reunion.  If Oliver shows up, he envisions, then the reunion will be a success and his other former classmates will see him as a hero and he will gain the self-esteem is still so desperate for all of these years later.

The film is billed as a comedy, but it is a black comedy.  The funniest straight-forward gags involve Dan’s interactions with his boss (Tambor) who is clueless as to modern technology.  Playing off of this, Dan develops a fictional scenario to go on a business trip to California to recruit Oliver.  Tambor’s scenes where he begins learning how to do everything from a google search, to how to zoom in on a picture one is viewing from the internet are very funny.  I found myself looking forward to future installments of Arrested Development just watching him.

Jack Black, has made a living playing lovable losers searching for redemption.  From School of Rock, The Holiday, Kung-Fu Panda, or even Nacho Libre, Black has perfected this “everyday man”.  Following his darker version of this familiar theme in the brilliant Bernie, Black seems to be trying to channel more of that character but without the charm and good-natured soul that personified Bernie.  Here, Black’s character of Dan is simply lost. 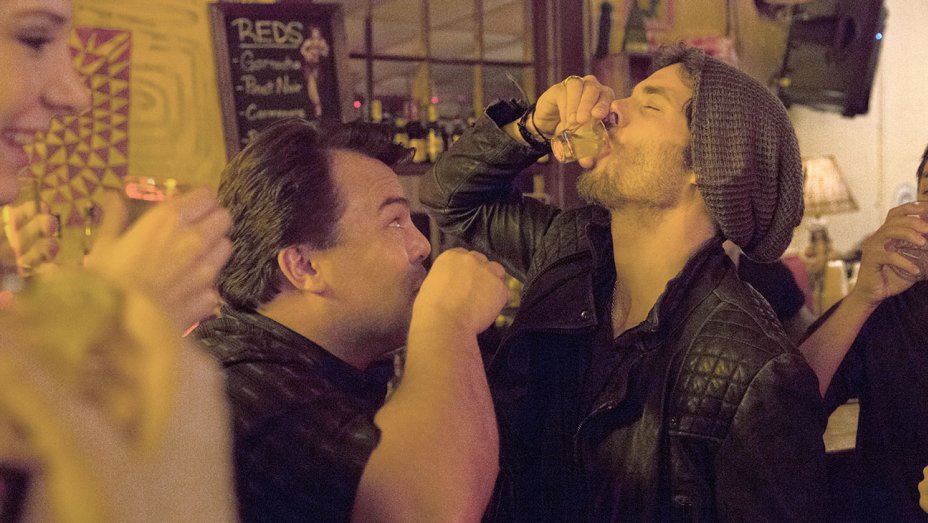 From the angle of a black comedy, the film works as it reflects back to us the harsh truth of how lost many people are as they struggle to find significance.  And like Dan, they often ignore all of the wonderful things they have in their life. For Dan, it is his wife and children.  But his feelings of inadequacies, stemming from his time in high school, cause him to act in ways that threaten to destroy all that is good.

Nothing demonstrates the feelings of lostness as the character of Oliver.  James Marsden is dead-on as a man who presents the face of success but is the embodiment of misery.  Contained in this performance is a subtle commentary of the shallowness of the entertainment business, and of hero worship.  People make lousy gods, and if you get any message from The D-Train, then this message rings loud and clear.

The problem with the film is that the journey towards this message is just littered with desperate attempts to compete with more of the mindless shock-comedies such as The Interview, Hot-Tub Time Machine 2, and the like.  Once Oliver is sodomizing Dan following a night of clubbing and cocaine, you just get the feeling that it was more an attempt to be “edgy” than it was to demonstrate the social commentary of our desperate need to be accepted.

If the film works, it is clearly due to the cast involved with this film, and less to do with the script which is simply adequate at best. Directors Andrew Mogel and Jarrad Paul are attempting their first directorial effort after having written the screenplays to the Jim Carrey film Yes, Man.  They clearly have a voice that may become more refined with future efforts, but here they are simply hit and miss, as there is a lot to love, and plenty to hate.

So the name “D-Train” refers to Dan’s attempt to ingratiate himself to his peers, as well as the fact that Oliver is really a D-level actor presenting himself as more. Really, the “D” stands for the depressing feeling one will have after the film is over if they see themselves as stuck and desperate as Dan and Oliver.  Despite the great cast and noble goals, this train is ultimately going no where.