The Latest Film Adaptation of a Thomas Hardy Novel 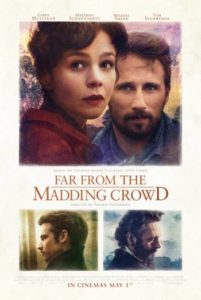 Novelist Thomas Hardy took the title of his book Far From the Maddening Crowd from the Thomas Gray poem, Elegy Written in a Country Churchyard (1751) where it reads:

“Far from the madding crowd’s ignoble strife, their sober wishes never learned to stray; Along the cool sequester’d vale of life, they kept the noiseless tenor of their way.”

Once you’ve read the story, or in this case seen the film, you will see that the title is meant to be nothing more than a cruel joke as Hardy proceeds to rip these notions apart, plunging the characters deep into the frenzy of the lives they inhabit that must deal with the consequences of their collective actions.

Having begun her acting career with 2005’s Pride & Prejudice, Carey Mulligan (The Great Gatsby,Inside Llewyn Davis) once again stars in the adaptation of a classic novel.  Here she plays Bathsheba Everdeen.  While no relationship to Katniss (for all the fans of The Hunger Games series), Ms. Everdeen is quite the independent female protagonist that is living in a time when it was detrimental to be so.  Enjoying her freedom and her independent spirit, Ms. Everdeen, remarks on multiple occasions that she has no need for a husband, as she has no wish to be “tamed” by a man who will only resent her when he finds out that she cannot be brought to the expected submission of gender roles of 1870, when the story takes place.

The film begins as Ms. Everdeen is working on her aunt’s farm.  Having lost her parents quite early in life, she is a hard worker, and a free spirit.  A chance horse ride introduces her to her aunt’s neighbor, Mr. Gabriel Oak (Matthias Schoenaerts-The Drop), who is a sheep farmer, with big plans to pay off his debt and own the 200 acres he is working.  Almost instantly, he proposes marriage to Ms. Everdeen, who rejects his offer with all of the required pleasantries, though she obviously is taken by him.

The film then takes a turn and flips their situations upside down.  Ms. Everdeen inherits her other Uncle’s estate where she once lived as a child, and leaves the farm of her aunt to take possession of her new fortune.  Mr. Oak tragically loses everything and must sell his land, and then leaves to find a way to earn a living.  When he unknowingly comes to the same town and takes employment on the farm Ms. Everdeen is now running, the dynamic of the relationship they had established is shifted.

The story from Thomas Hardy introduces other potential suitors, all competing for Bathsheba Everdeen’s affections.  The most notable is the wealthy William Boldwood (Michael Sheen-Underworld, The Twilight Saga) whose land border’s Ms. Everdeen.  As he too is smitten and proposes, it puts Gabriel Oak in a situation where he can only continue to watch from the vantage point of an employee as he longs to marry Ms. Everdeen while she continues to be an independent spirt.

The film has many plot twists, including a soldier named Sgt. Francis Troy (Tom Sturridge-Pirate Radio, On the Road) who is also pining for Ms. Everdeen. His own restless spirit may be a match for her fierce independence.  With three potential suitors and one intended female, there is plenty of opportunity for conflict.

The film is beautifully shot with fantastic views of the English countryside where the elements threaten the livelihood of those who must deal with its varying weather conditions to successfully find success growing crops.  Director Thomas Vinterberg, whose last film was the brilliant Mads Mikkelsen helmed The Hunt, has an able touch to this film that allows it to breathe slowly as the story unfolds, and embodies the time period in which it is set.

The English sense of propriety is front and center, and collides with our culture’s sense of saying what one feels no matter the consequence and the quiet suffering of Mr. Oak who would rather hold on his pride even if it means great suffering.  The nobility of denying one’s desires for the sake of another’s happiness is upheld throughout the story, as is the consequences of standing silently by.

The “noiseless tenor of their way” as contained in Thomas Grey’s poem above, is anything but, as Ms. Everdeen’s fierce independence creates all kind of audible ruckess in the lives of these men who are obsessed with possessing her, and her stubborn free-spirit.  And this is the point.  Our choices reverberate and are felt and heard by those closest to us.  The three men pursuing Ms. Everdeen feel the frenzy of the madding crowd that surrounds her. Yet, each longs for her to choose to settle down into the “noiseless tenor” with them.  And as she predicted, the thing that attracts them (i.e. her independence and spirit), is what they grow to despise.

Far From the Madding Crowd is mostly a strong entry, but suffers from being a bit too long that strangles some of the passion that is meant to fuel the story.  We are naturally inclined to identify with the heartache of Mr. Oak as he silently suffers, watching Ms. Everdeen continue to leave a trail of broken hearts around her, but the focus shifts away too much from his point of view to keep the tension up before quickly shifting back to try to recapture it.  Also, Ms. Mulligan’s character arc takes too long to develop to the point of where it eventually lands in the end.  Her independence is tamed a bit too quickly at times while the film still tries to demonstrate it in spite of what we are seeing on screen.

Overall, Far From the Madding Crowd delivers a competent adaptation of a classic novel that will appeal to those looking for a nice period piece as a contrast to the extremely loud, fun, and gratuitous blockbuster, Avengers: Age of Ultron, whose explosions will surely seep through the adjacent walls into the theater showing this rather quiet film.  Those seeking such a respite, will find a welcoming film awaiting them, even if the film ends as softly as it begins, with no other impact on those who partake.