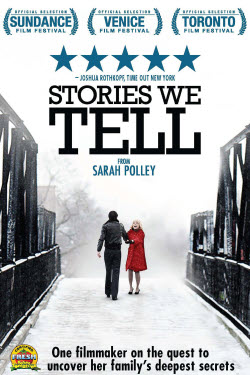 One of the tasks of adulthood is to sort out what we have experienced in childhood – and perhaps most of all, to seek to understand our parents as people. The movie Smoke Signals ends with a poem by Dick Lourie, “How Do We Forgive Our Fathers”, which includes these lines:

In Stories We Tell, Sarah Polley’s intensely personal family documentary, the focus is less on forgiveness than on understanding. But maybe there can be no forgiveness without first seeking understanding – and Polley seems determined to know the mother she lost to cancer many years ago. Diane Polley had a larger than life personality: she loved to sing and dance, laughed loudly, attracted chaos, needed excitement. She fell for the actor, Michael Polley (resulting in the end of her first marriage and the loss of custody of her oldest children), but “Mick” believes even now that Diane fell for his stage presence and not for the staid, introverted man that he really is. Sarah Polley, the youngest of the Diane’s five children, lost her mother when she was still a young girl. The jokes from her older siblings – and even from her father – about her questionable paternity started soon after.

“Stories We Tell” answers the mystery of Sarah Polley’s parentage, but that’s not what the movie is really about.

It’s about the ways in which memories are filtered and refracted, about the need we all have to own and interpret our histories even as they intersect with other people’s stories. Decades after her death, Diane Polley’s children, friends, husband and lovers still feel deeply for her and try to protect her memory.  They still love her, and even across time are still wounded by her.

As a directorial feat, Stories We Tell is remarkable. The film uses a combination of home movies and staged footage – but they run together so seamlessly that sorting what is “documentary” from what is drama becomes difficult, and perhaps unnecessary. Even home movies are removed from reality, something that becomes clear as we watch scene after scene of the vibrant Diane while listening to her friends and family talk about the loneliness and frustration she experienced. Still, the path she chose in seeking happiness had a ripple effect. One of her sons admits to being disappointed in his mother. Her three daughters wonder if there’s a connection between their mother’s infidelity and their own divorces. And Michael, for all of the shortcomings he seems to have had as a husband, narrates the film with such tenderness for his late wife that it is impossible not to sympathize with him.

How do we forgive our fathers and mothers for the ways in which they failed us, failed each other, for the times in which their choices were selfish and caused suffering? In Sarah Polley’s case, this documentary feels like a work of such radical empathy that forgiveness seems a natural response. It’s a beautiful, deeply human film and one that, despite being about one specific family story, feels surprisingly universal. 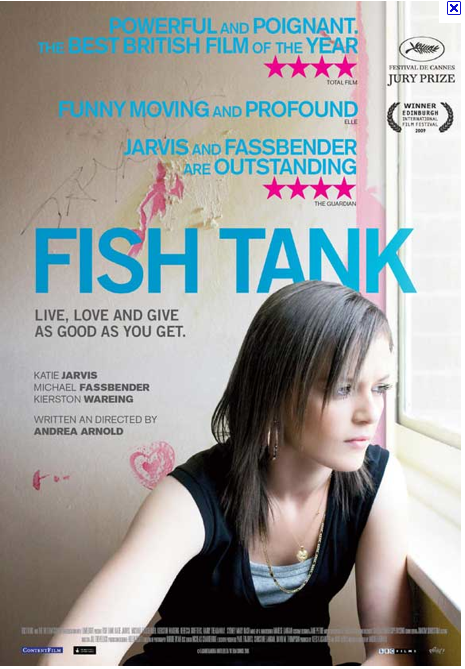 Mia (Katie Jarvis) is a sullen 15 year old, living in the blight of English public housing with her younger sister and a mother who is barely more adult than Mia herself. Fish Tank is a dark, grim piece of social commentary, but the strong performances make it worth sticking with Mia, her hard partying mum (Kierston Wareing) and Mum’s new boyfriend (Michael Fassbender).   Jarvis, a first time actor in a lead role, perfectly portrays the defiant spirit that allows some neglected and abused children to survive.  Whether she will be able to do more than simply survive is left unanswered.