Redemption Is Undermined By Violent Tone 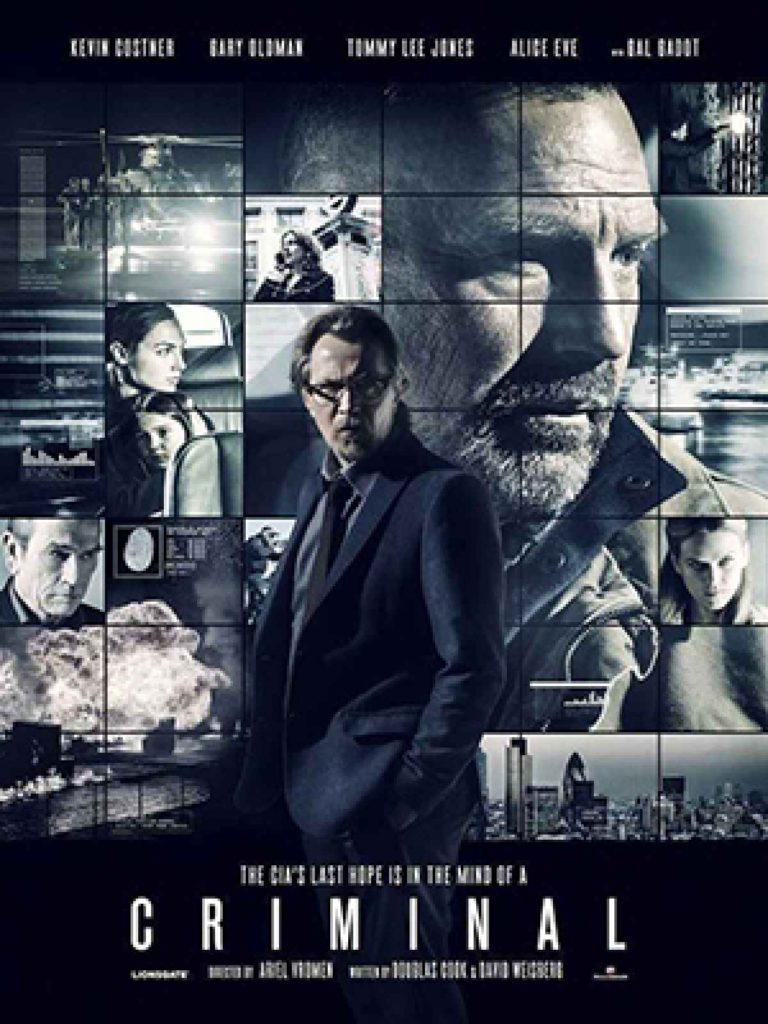 Bill Pope (Ryan Reynolds) is a CIA agent based in London. He’s on his way to meet up with a hacker called The Dutchman (Michael Pitt) – a hacker who has access to loads of nuclear launch codes – when he’s intercepted by a revolutionary anarchist name Xavier Heimbahl (Jordi Mollà). Heimbahl wants those launch codes, of course, and tortures Pope to death in an effort to find The Dutchman.

A few minutes into Criminal Ryan Reynolds is dead, but Pope’s memory lives on in the most literal sense. Researcher Dr. Franks (Tommy Lee Jones) has been working on a way to transfer the consciousness of one human being into the brain of another. Now, with Pope gone and the CIA desperate to find The Dutchman before Heimbahl does, it’s time for a human trial. The unwilling candidate for the transplant of Pope’s memory is a violent, brain damaged sociopath named Jericho Stewart (Kevin Costner). He’s sprung from prison for the surgery but harder to control than anyone in the CIA anticipated.

Criminal is part sci-fi, part Bourne-style thriller. It feels vaguely familiar, from it’s maniacal European villains to it’s high-tech McGuffin (the launch code program, nicknamed “Wormhole), to Gary Oldman in a workmanlike performance as Pope’s superior at the CIA. Kevin Costner works harder to distinguish himself as Jericho, an increasingly tormented mixture of the ruthless, amoral criminal and the virtuous Pope. He grunts and growls, and suffers constant pain and disorientation from the memory transplant. His burgeoning relationship with Pope’s wife and daughter is the means to Jericho’s transformation, but the mixed tone of Criminal leaves the viewer almost as disoriented as Jericho.

Director Ariel Vroman (The Iceman) has made an ugly movie – jarring camera work, unpleasant characters, but above all, ugly violence. There may be some satisfaction in seeing villains get their comeuppance, but what about the innocent bystanders that Jericho brutalizes as he eludes the CIA? What about the law enforcement officers just doing their jobs? Criminal makes no distinction, and for all of his moral evolution Jericho doesn’t make one either – he’s just as quick to resort to violence late in the film as he is early on, even if it’s now for a more noble reason than his own survival.

The brutality of Criminal is only interrupted when Pope’s widow, Jill (Gail Gadot) and daughter (Lara Decaro) are on screen. Jericho meets Jill when he breaks into her home and binds and gags her, though, so the swiftness with which she trusts him around her young child seemed wildly implausible. That was far from the only implausible piece of Criminal’s narrative, but outside the Pope’s idyllic home the action zips along quickly enough to distract – at least temporarily – from what doesn’t add up.

Violence aside, the most distressing thing about Criminal is Tommy Lee Jones’ performance. Granted, having the wry and weathered Jones play a medical researcher was an odd bit of casting, but that doesn’t explain this performance. Jones looks gaunt and has just one facial expression throughout the entire movie: a sad, confused deer in the headlights. Perhaps Vroman directed Jones this way – in fact, I sincerely hope that he did. If not, I’m a bit worried about Jones.

Criminal offers lots of chase scenes, a high body count, and a handful of explosions. That will be enough to satisfy some viewers, but it left me cold.