Cowabunga, or Just a Half Shell of a Film? 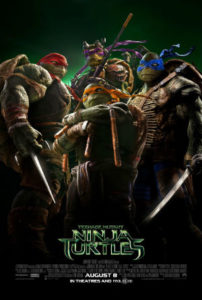 The famous Teenage Mutant Ninja Turtles are back, and this time they’re updated for the modern age.  But is that a good thing? When it was learned that Michael Bay, of Transformers fame, was attached to this reboot, there was a collective groan heard round the world.  Would he try to “tranformerize” the turtles?  Would he simply find a way to objectify more women?  Would he reduce our heroes to simply a half-shell? The short answer is: Yes.

Jonathan Liebesman (Battle: Los Angeles, Wrath of the Titans) actually directs this film, but Michael Bay’s producer prints are all over this film.  While production was ramping up, Bay actually took quite a few hits for suggesting that this incarnation of the teenage super-heroes was going to involve an origin plot where they came from outer space (much like the Transformers) rather than being mutants from the sewers after encountering an ooze.  Fortunately, here, they are very much from Earth and Bay gets to hit back at his detractors through dialogue in the film that addresses those “rumors” of them being from outer space. Their origin here will seem to many to be a silly subplot as they begin to connect it to April O’Neil, but be your own judge on that.

This film is aimed squarely at 8-13 year olds in everything from the recycled plot, the adolescent dialogue, and the pre-pubescent obsession over Megan Fox that includes everyone from a much older man, a cameraman who works with April, to the turtles themselves.  Fox plays television reporter April O’Neil who is seeking to track down the story of the “Foot Clan” who has been decimating the city in a giant crime wave.  Led by an unknown leader, that fans will know as Shredder, there seems to be no stopping this group of thugs until April discovers that there are unknown vigilantes fighting back.

Growing up watching the cartoon version of the turtles, the last person you would picture as the down-to-earth and approachable April O’Neil is Megan Fox.  This was a monumental miscast and it backfires on the film throughout its running time.  Ms. Fox is incapable of demonstrating any emotional changes in her look regardless of the situation.  For nearly 2 hours it’s as if she is modeling, rather than acting.  But despite swearing he would never work with her again, after Bay famously firing her from the Transformers films, she shows back up here in another of his films.  Bay, oh, I mean Liebesman, makes sure to place her in the Bay “females are objects” mode almost immediately where she is seen doing a news segment where she has to do workout moves that consist of jumping up and down on a trampoline where she can be gawked at.  Other notable examples include everyone commenting about wanting to be with her and staring at her backside in multiple scenes.

As for the turtles themselves, the motion capture is fairly good, but their personalities run too much together to really distinguish them apart unless you are an older fan who remembers each of their distinct idiosyncrasies.  Michelangelo is still the skater and Donatello is the techie, but Raphael and Leonardo kind of blend together a bit much on who is the real leader.  Splinter’s motion capture looks like a step backward but he has some impressive fight scenes where he earns a Yoda-like reaction when he begins a fight with Shredder.

Will Arnett, fresh from his animated turns in The Lego Movie and The Nut Job, plays more of a Gob Blueth character serving up the comic relief as April O’Neil’s cameraman, but most of the jokes have to do with how he obsesses over her rather than providing any real memorable lines.

The action is definitely a step up from the previous movies of the 1990’s, or the cartoons or comics, for that matter.  It is here where you get the true footprint of Michael Bay, where action scenes just means chaos mixed with slow-motion shots that allow you a few seconds to get oriented to what is happening before the camera loses control and begins randomly spinning through the action again.  Since this is aimed at a younger audience, they’ll love it as the action won’t have to make sense as long as it looks cool, but any rational look at the action sequences render it absurd, even in a film about teenage turtle superheroes.  Bay’s motto of “if you don’t know what to do, blow something up” rings true, even in this.

Shredder is much more menacing here than the cartoon allowed him to be, or the previous films.  Wearing all new armor, he might as well be a Transformer with all of the things they allow his suit to do.  Sadly, there are no Be-Bop or Rock Steady, nor will you see Kraang, but there will be sequels in the works I am sure, which will probably see them make their debut.

And yet, despite the absurd action sequences, the sexism and objectification of April O’Neil throughout the film, this will be a fun ride for your older kids that will spawn a whole run on Ninja Turtle toys, backpacks, pizza, and the like.  For discerning parents, these new Turtles sometimes have a teenage mouth talking about “Kicking Ass” or having a turn being “the bad-ass”, so be weary if you don’t want your kids repeating those phrases or trying to hook up with a “hot girl” like April O’Neil as these turtles do.  There are still the throwback phrases such as “Cowabunga” and “heroes in a half-shell” for the older fans in case you are worried.

I did see the film in 3D and it really added nothing to the experience.  Liebesman had the same problem with Wrath of the Titans, so don’t waste the extra money just to see it in that format unless you’re going for a novelty pair of the glasses that look like the Ninja Turtle’s mask.  In fact, the 3D was actually quite distracting during some of the action sequences.

If you are fans of the comics, this one has the darker “look” you might want but the dialogue and tone tries to be a mix of the cartoon and previous films, though updated for today’s viewer.  Sadly, you will also not see Vanilla Ice emerge in the credits with a “go ninja, go ninja go!”, but I highly recommend you YouTube it for some nostalgic fun.