Going Behind the Shield (and S.H.I.E.L.D.) of Marvel’s Latest Actioner

“After the Show” is our spoiler-friendly way of talking about movies at ZekeFilm.  In this article, plot twists and hidden details of CAPTAIN AMERICA: WINTER SOLDIER are discussed. 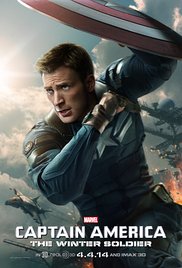 It’s 2014, and Captain America doesn’t know what he wants. The unfrozen patriot super hero of WWII is back for a very different sequel to his 2011 Joe Johnston-directed wartime yarn, and of course the world has changed. A big question is whether or not good old fashioned shield-slinging combat is enough to solve the institutional systemic problems of today. Our main character may hail from the black & white era, but the issues he’s facing, and the morality in which they’re faced by those around him, is anything but.

Captain America: Winter Soldier is Marvel Studio’s conspiracy thriller; a political potboiler without any rigidly defined politics. (Even if Cap starts the movie “On your left”… Don’t read too much into that.) It’s a comic book action borrowing the conspiracy skins of films such as Three Days of the Condor (1975). Fortunately, that couldn’t keep Robert Redford away, that icon of Condor and other 1970s-era cinema that Winter Soldier – both the film and the source material comic book arc – are so intentionally rooted in. His presence is an undeniable boon of both prestige and gravitas for directors Joe and Anthony Russo, who hail from smart television (“Community”, “Arrested Development”). Those unfamiliar with All the President’s Men, Parallax View and Telefon will likely, at the very least, recognize the now-deeply ingrained stylistic imprint of Paul Greengrass’ Bourne films, our jaws satisfyingly clinched thoroughly through numerous handheld camera action sequences. (In further Greengrass invocation, the film opens with a sea-faring pirate/hostage situation, ala his Captain Phillips.)

Although I haven’t read every Captain America comic book ever made, I’ve certainly read enough of them to say with a degree of authority that “Winter Soldier”, by writer Ed Brubaker and illustrator Steve Epting, is among the best, if not THE best one. It works so well precisely for reasons the movie cannot share. Yes, there’s the mind-blowing return of the long canonically dead Bucky Barnes as the titular brainwashed Soviet assassin. (Marvel Comics famous decreed long ago that two character deaths were Never To Be Undone: Uncle Ben, and Bucky. So his genuine return in 2005 wasn’t just another Jean Grey resurrection, it was the rare Big Deal in comics.)

But perhaps more importantly, in doing so, it allowed Brubaker to reinvent Cap’s distant past in a way that was newly relevant, contrasting the post 9-11 landscape of the time with hard-bitten World War II flashbacks, for the first time detailing that perhaps Cap, and especially Bucky, weren’t so unblemished back then in terms of their military service actions. He was interested in asking why, in this day and age, would a man willingly dress in the American flag? And more importantly, why, with America so increasingly shunned on the global stage, and even within its own borders, would people still love him? Brubaker cracked those hard questions directly in his landmark debut arc “Winter Soldier”, and the movie gets at them well enough in round-about ways. 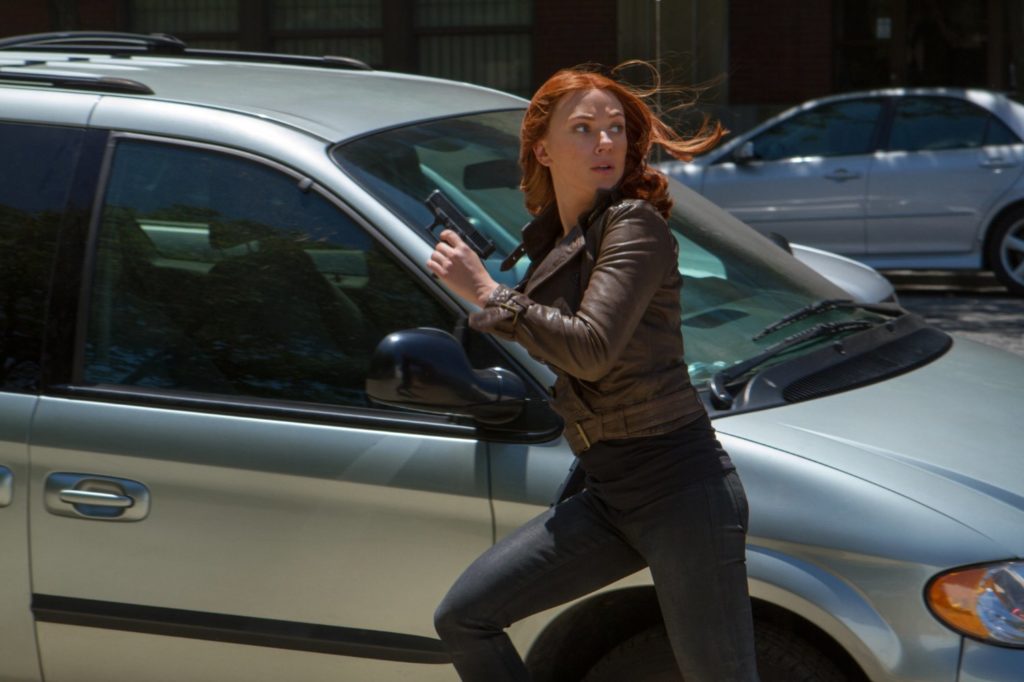 The Winter Soldier movie merely uses the comic as a jumping off point, effectively holding onto its tone, primary cast (Black Widow [Scarlett Johannson, doing her best Eliza Dushku], and Steve Roger’s longtime partner The Falcon [Anthony Mackie]), and Bucky reveal. The movie deviates into its own seismic conspiracy reveals and consequences (“The Marvel Universe will never be the same!!!”), inadvertently rendering the Winter Soldier himself as a near also-ran in his own movie. Not since Prince Caspian has a title character been so backgrounded against the true thrust of the plot, in this case an imposing meta-franchise altering one. (Like I said, the Marvel universe will never be the same.)

Winter Soldier is a mysterious presence throughout (even if we’re dealing with a “Scooby-Doo” level economy of suspects regarding both his identity and who’s pulling his strings), the kind of glorified henchman that his evil originators intended for him to only ever be. It is nice that his look made the translation from page to screen so well, right down to the red star on his super-cool mechanical arm. And those who sat through the credits know that this likely isn’t the last we see of the Winter Soldier… (reportedly, the actor Sebastian Stan is signed for nine Marvel movies.) 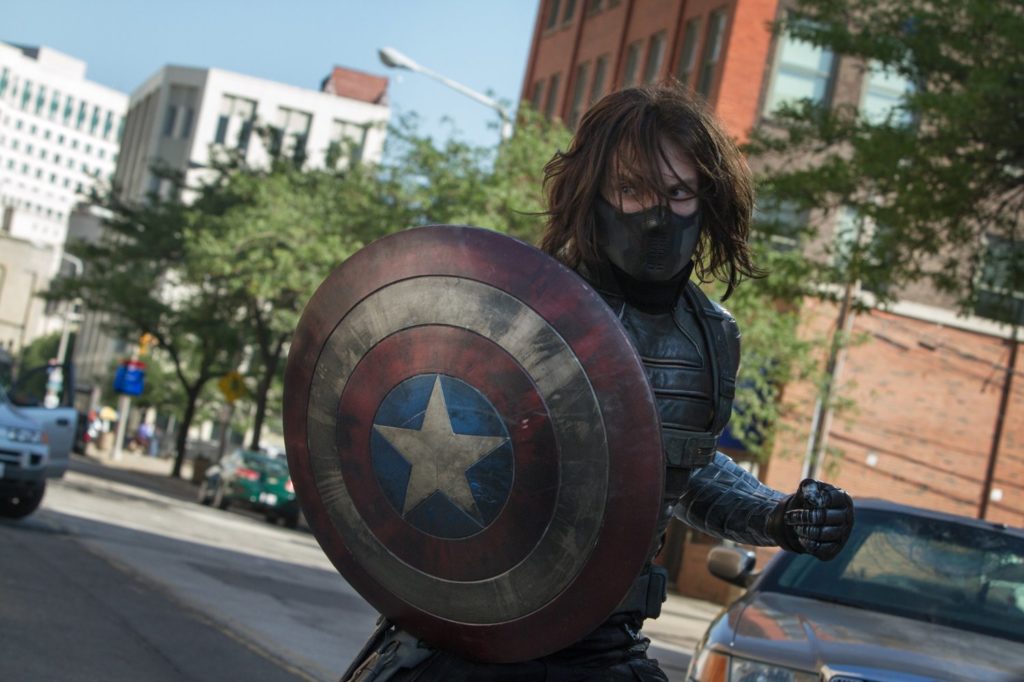 Sebastian Stan as The Winter Soldier.

The moment Marvel signed Joss Whedon to helm The Avengers, we knew that there was no way a major institutional super-structural mega-entity such as S.H.I.E.L.D. could persist unscathed. It was just a matter of time before the once super-cool Jim Steranko 1960s spy outfit would be revealed as the Marvel equivalent of Buffy’s Initiative, and the heroically dubious Nicholas J. Fury (Samuel L. Jackson) would be driven underground. It’s happened numerous times in the comics over the decades, and the minute we saw the helicarrier falling out of the sky in this film’s trailer, we could see that now was the time for it to happen at the movies.

Gone is the red/white/blue color theme of the previous film; now it’s dark grey/light grey/blue. It’s reflective not only of an America that may’ve lost its way or identity, but may in fact be a merged non-entity on the new world global stage without realizing it. Even Cap’s trademark shield is muted via a permanent lair of grime and filth. When the color red is seen, its so limited it practically pops off screen: A taillight on a car getting shot up; a swath of graphic on Steve Rogers’ t-shirt. What’s so special about America anyway, and why does it still need a Captain? Don’t expect answers so much as reasonable dramatic resolution.

Chris Evans in his third outing as Captain America.

As a conspiracy thriller, Winter Soldier reveals nothing we haven’t seen before. Inevitably, the corruption runs all the way to the top, as it has all along. And if you guess that the key villain is the aging white male name actor in a nice suit, you’d be right. But this film has something most others can’t, which is a sense of history. Thanks to the unique go-anywhere serpentine storytelling allowance of The Marvel Cinematic Universe ™, we understand that the film understands the weight of the past. In reality, World War II is the flashpoint event of the twentieth century, in that everything that happened prior was leading up to it, and everything that happened afterwards is affected in its wake. Movies have always shown us this. But now that time is removing us so far from not just that war, but that century, we seldom reflect upon it. Indeed, something’s being forgotten, compromised… something in that color red.

Captain America: Winter Soldier is the first movie of 2014 that I genuinely did not want to end. Yet, for a film as immensely enjoyable as this one is, the narrative cheats are many, and genetically enhanced at that. In lieu of the comic’s fifty-plus years of “He’s-dead-and-he’s-NOT-coming-back!”, the screenplay must send Cap to a Smithsonian exhibit about himself in order to refresh mainstream audiences on the so-important events of the 2011 film, itself likely a hazy memory at this point. “Who’s this Bucky Barnes again? And why is Captain America alive today…? Oh yes, that’s right.” 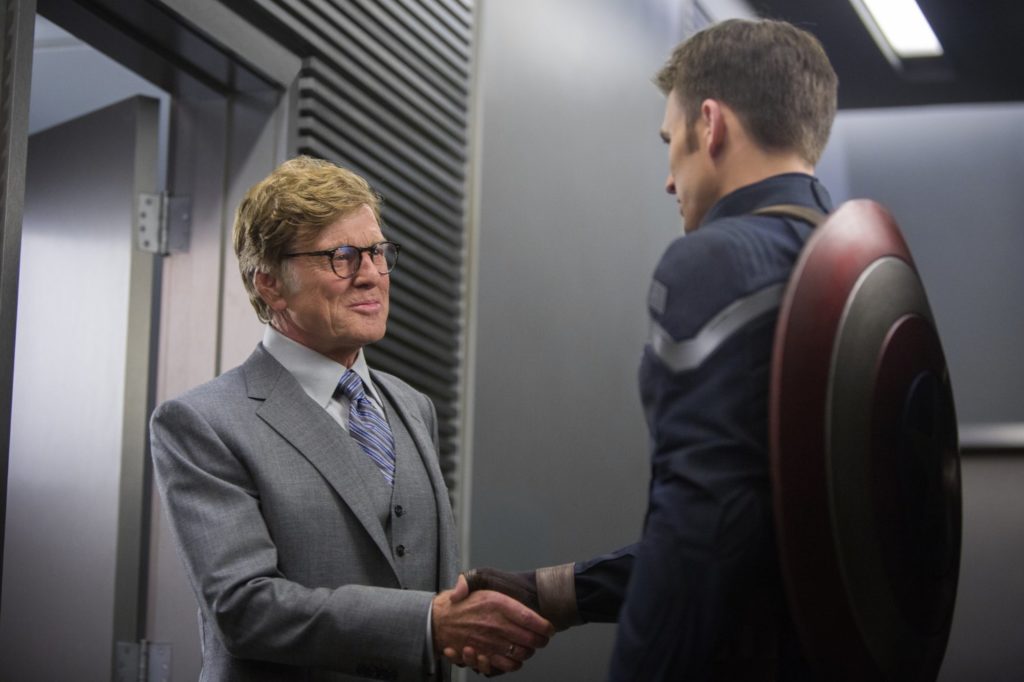 Also, the venture into the depths of the retro-computerized data bank/hive mind of onetime corporeal Hydra baddie Armin Zola (Toby Jones) amounts to little more than an intimidating info dump. Blowing him up doesn’t make his place in the storyline any heavier. (After all, it had been at least ten minutes since something blew up on screen.) Demonstrating a significant difference between the mediums and their audiences, comic books don’t need the Smithsonian – the minds of their fans already are one. (Side note: If Steve Rogers is going to fight Batroc the Leaper for no reason, let’s at least see a handlebar mustache! And also: I for one miss Redwing, the Falcon’s loyal bird sidekick whom he can communicate with.)

In terms of quality, tone and theme (not to mention the phoney Fury death plot twist), it’s fair to call Captain America: Winter Soldier the Dark Knight of Marvel movies. (And as it turns out, although I wrote this piece the day before the film opened, I’m far from the first.) If it’s not blatantly asking for that comparison in the text itself, it’s still meant as a compliment. Captain America, in a world far removed from WWII and even now 9/11, may not know what he wants – but audiences will no doubt want more Captain America following this action-packed outing. Winter Soldier easily stands as one of the best Marvel films, on any front.