The third time is NOT the charm for this once great animated series. 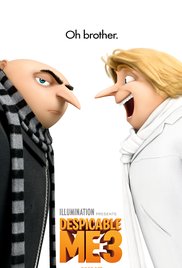 The first two films of the Despicable Me franchise were directed by Pierre Coffin.  For the spin-off, Minions, he shared directing duties with Kyle Balda, who also joins him for the latest film, Despicable Me 3.  They also have brought in co-director Eric Guillon, who like Kyle Balda moved up from the Animation Department.  With each new cook in the creative kitchen, this series has seen diminishing returns.  While I chalked up the failure of the Minions film to having an occasionally humorous side character become the lead, effectively wearing the joke thin, I’m left asking why that failure in a spin-off film has now carried over to the series proper.

The voice cast is mostly back.  Steve Carell once again plays the ex-villain turned Anti-Villain League agent and adoptive father Gru.  Kristen Wiig also returns as Gru’s new wife, and fellow agent, Lucy.   Other talent includes Julie Andrews, Jenny Slate, Steve Coogan, and Trey Parker.  Despite all of this, something seems to be missing.

In terms of direction, having three cooks in the directorial kitchen has resulted in constantly shifting and uneven tone, pacing, and focus.  The Minions staging their own “Great Escape”, provided one of the few originally fun moments of the film, but much of the rest just seemed to fall flat.

The story of this installment focuses on the changing of the guard at the Anti-Villain League.   New leadership comes into conflict with Gru’s methods and how he has recently embarrassed the agency in how terribly he failed to bring in the latest super-villain, Balthazar Bratt (Parker).  Bratt is a washed up 80’s child actor who used to play a problem child with a catch phrase of “I’ve been a bad boy” as he sought to commit mayhem in each episode, aided by his robot companion, Clive the Robot (Andy Nyman).  When puberty ages him out of the role, he grows up with a desire to get revenge on Hollywood for firing him. This revenge will involve stealing the world’s largest diamond, which puts him in conflict with Gru and Lucy who are on the case to stop him.

When Gru and Lucy find themselves suddenly without a job, they find a needed distraction in learning that Gru has a twin brother, whom he has never met, that longs to meet him. His brother is Dru, and is also voiced by Steve Carell.  Through this new family relationship, Gru will have to decide if he will go back to the thing he used to love, being a villain, or be the anti-villain hero that he has become in the eyes of his daughters, and his wife.  The Minions, finally tired of being “good” also make a play to force Gru back into the life of crime.

The look and feel of the film is consistent with the first two installments, and the voice talent gives it their all.  Even the Minions find themselves into some pretty funny predicaments, and thankfully go back to being the occasional comedic relief to the main story’s proceedings, instead of the star attraction.  Still, something is off. 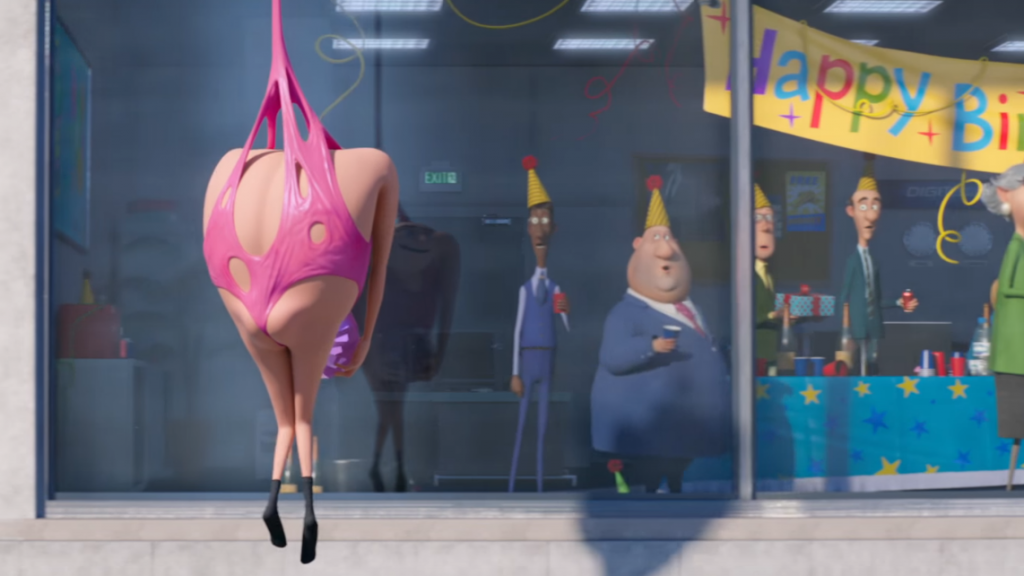 I believe that ultimately the blame for the precipitous drop-off of this series’ quality lays at the feet of both the script writers, Cinco Paul and Ken Daurio, as well as the aforementioned three directors.  Despite having the same writers in all three films, suddenly we see all forward motion stop, and a tired plot line that is used ad nausea in other films, makes its way into this one.

The mysterious “twin” where the same actor can portray both parts has been used many times before.  Sometimes this was done to good effect like the original Parent Trap. Other times, not so much…like Jean-Claude Van Damme’s Double Impact.  Gru, by himself, was a character that has always been tempered by the other characters around him. More grounded individuals who kept his eccentricities in check.  Now, we simply get a double dose of Gru, and almost-Gru, in the form of Dru (both are played of course by you know who….don’t you?), but  I digress. 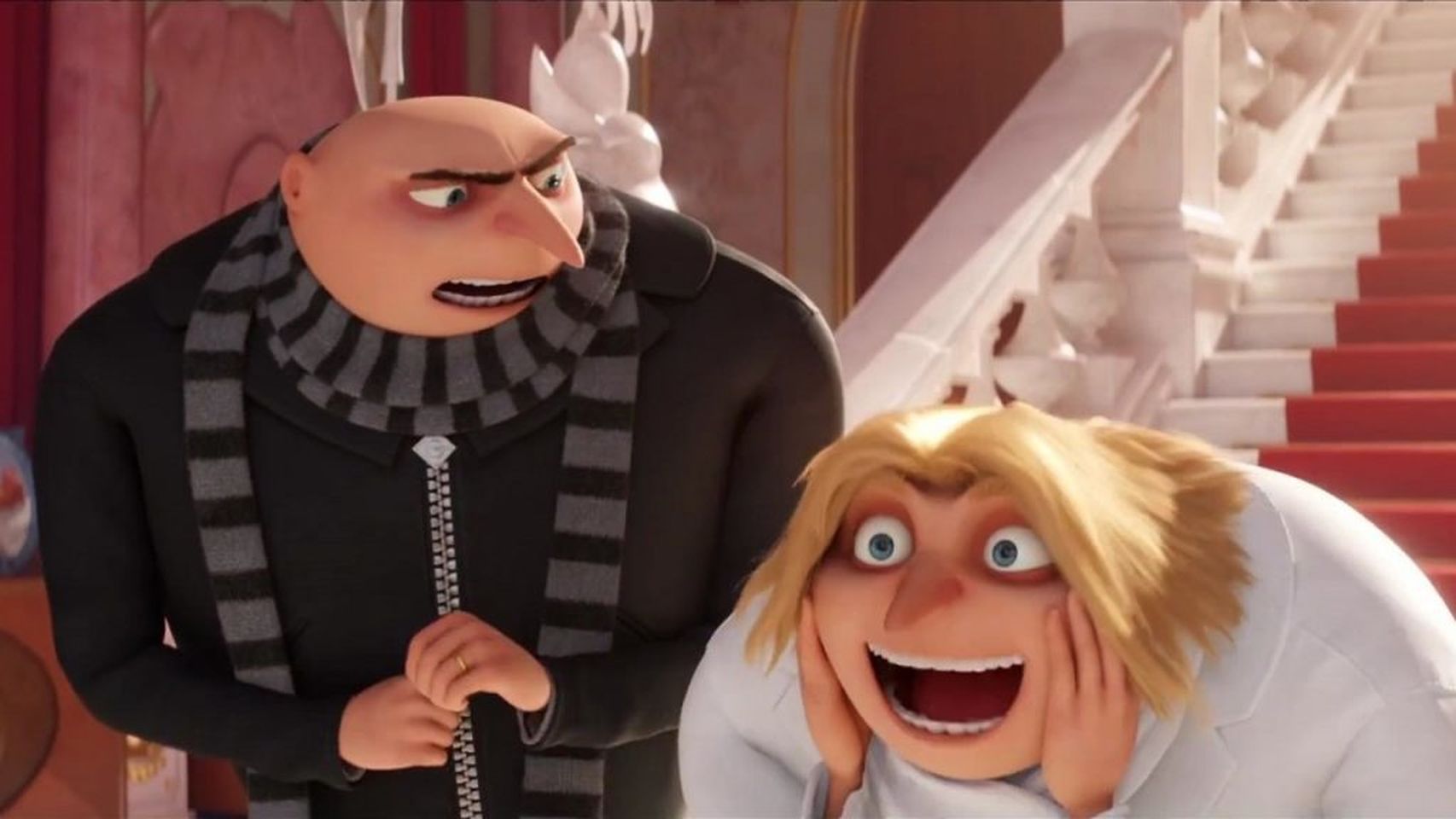 This, of course, has the same effect of having non-stop Minions in their solo film….it becomes overbearing, and ends up stretching the things we love about the characters to the point that they are threadbare.  It also takes away time in the film needed to interact with others, and comes at the cost of Dru’s personal development that was so critical to the success of the first two films in the series.  Sadly, we don’t get much in terms of Gru further learning how to navigate the rugged terrain of parenthood.  We also don’t see he and Lucy adjusting much to their new marriage, which short-changes the emphasis on their budding romance that was in Despicable Me 2.

Much of the humor comes from the same running gag of Balthazar Bratt being a man-child who is stuck in the ’80’s.  While this is used very well in the case of Bratt’s cool keyboard guitar that he uses to “dance fight”, channeling some of the nostalgic hits of that decade (loved especially the Dire Straits riff that shows up), or even his vocabulary and dress, the rest of it comes off as a bad rip-off of Adam Sandler’s The Wedding Singer, with a little bit of the toy store in Toy Story 2 thrown in. 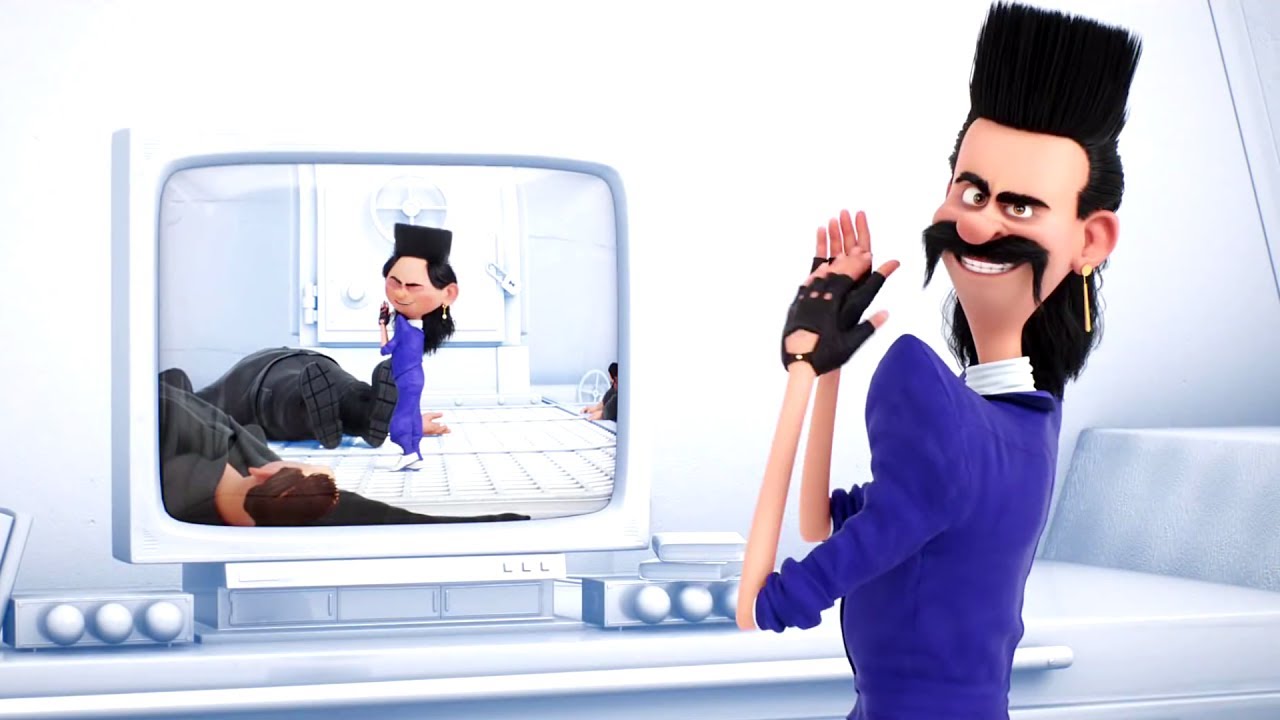 In terms of direction, having three cooks in the directorial kitchen has resulted in constantly shifting and uneven tone, pacing, and focus.  The Minions staging their own “Great Escape”, provided one of the few originally fun moments of the film, but much of the rest just seemed to fall flat. Smaller kids may find more to laugh at (there is still the fart gun, though Dr. Nefario is notably absent), but the rest of the film is just an exercise in going through the motions.  I still liked it better than Minions, and I think there is still plenty left to do with these characters.  So I’m not ready to close the book on Gru and the “goils” in his life, its just that we need to find a script with purpose that serves the characters and the journey they are on instead of simply existing to be a guaranteed summer cash cow for Universal.  It would also be better for there to be a singular director who can take this film series further into the lives of the characters we have grown to love with a single focus and vision.  So, I can confidently say, the third time is NOT the charm for this once great animated series.