#52FilmsByWomen: THE DECLINE OF WESTERN CIVILIZATION

Documentary Goes Into The Belly Of LA’s Early Punk Scene 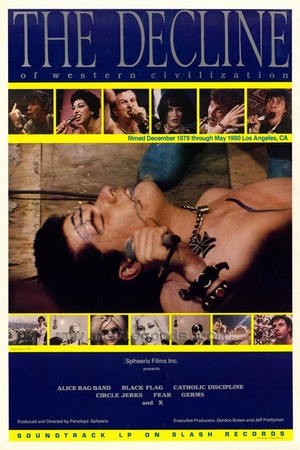 From the fall of 1979 through the spring of 1980, director Penelope Spheeris (Wayne’s World) interviewed and filmed several of the most influential bands in LA’s underground punk scene. The documentary that Spheeris crafted captures a very specific moment in music and cultural history – and a very brief moment for some of the artists involved.

I was a high school freshman when The Decline of Western Civilization was being filmed, and only barely aware of punk music. In the next few years the playlists at our parties would start to include The Clash, Black Flag, the Dead Kennedys – music that would shock our parents, songs that made us feel that we were part of some great revolt. Of course, we got that buzz just from playing the songs – safely, in the Midwest, far removed from the mosh pits, poverty, drugs and shambolic performances Spheeris captured on screen. When The Decline was released in 1981, punk was still considered dangerous and antisocial enough that Spheeris couldn’t get distribution for the film. She finally convinced one Hollywood theater owner to give the movie a single midnight screening. The mass of punks who showed up were met by a swarm of police, and then LA police chief Daryl Gates sent Spheeris a letter requesting that she never screen The Decline of Western Civilization in Los Angeles again.

We’re now so far removed from the punk rock invasion that the whole thing can take on a rosy nostalgic hue. The signs and symbols that seemed so bold at the time – the Mohawks and piercings and tattoos – have since been adopted by clean living suburbanites.  Iggy Pop and the Stooges even provided the soundtrack for a cruise line commercial.

The Decline of Western Civilization is a reminder that there was once something beyond fashion and marketing to the punk movement. The kids that Spheeris captures on screen (and many of the artists still were kids) were not just performing punk. They were living it. The members of Black Flag were sleeping in an old church, and proudly show off the closets and crawl spaces that serve as their bedrooms. An interview with X takes places while John Doe is giving a band mate a homestyle tattoo. And then there’s Darby Crash, the lead singer of Germs. He is frank in telling Spheeris that he relies heavily on drugs and alcohol to be able to perform, in part because he’s afraid of his audiences. By the time that Spheeris was interviewing Crash, the Germs had been banned from most of the clubs in LA because their shows so often turned into riots. Watching the footage of the Germs performing live, I felt the way my parents must have felt about punk music in 1980. It seems like nothing more than madness and noise and chaos. The middle aged woman that I am now doesn’t get it. Other bands – in particular, X – hold up better musically (and they’re still touring!).

There’s a range of punk styles in The Decline of Western Civilization, from the self-consciously shocking Catholic Discipline to Fear, spewing hatred at its audience, to the droll delivery of the Alice Bag Band. In between the live performances, Spheeris interviews fans, club owners, managers – but most of all, the musicians themselves. Spheeris is never seen and seldom heard, but she laughs often as the artists talk to her, and that laughter shapes the tone of the film. There’s a warmth to Spheeris’s interviews: she seems to enjoy the artists as people, rather than treating them as either threats to society or exotic creatures. She also finds the veins of humor in all of that rage and destruction. It’s hard not to laugh as the exasperated manager of the Germs describes her inability to get Darby Crash to sing into a mic.

Darby Crash spends much of his interview time cooking breakfast. A performer who had a reputation for rolling in broken glass and vomiting on stage, here Crash seems a modest, likeable kid. He died of an overdose at 22, before the film was even finished, having taken the punk lifestyle to what many people feared was its logical conclusion. All that anger, all that self-destruction; it couldn’t end well, could it? Some punks did burn out quickly, like Crash. Others settled down and started getting their tattoos and piercings in upscale shops. But there was real anger behind early punk music – mostly the anger of poor white males, resulting in music that was not only violent but sometimes sexist and racist. Spheeris takes us back, before it had all been softened and assimilated, and the view is fascinating. 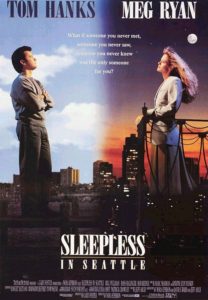 If you need a palate cleanser after all the decadence of The Decline of Western Civilization, this will work.  Norah Ephron co-wrote and directed this rom-com confection about a young widower (Tom Hanks) finding love across the miles after a young woman (Meg Ryan) hears his story on a radio call-in show.  It’s lightweight and contrived, but it’s reasonably witty (thanks to Ephron) and the extremely likeable leads make it pleasant enough to watch.  Rosie O’Donnell is fun as Ryan’s best friend, and poor Bill Pullman is admirably annoying as Ryan’s highly allergic fiancé.