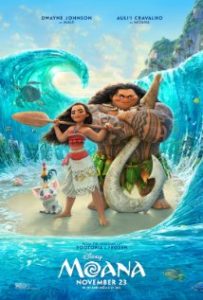 Sporting four directors with such Disney pedigree as The Little Mermaid, Aladdin, Big Hero 6, and others, Moana is the latest Disney princess that is breaking the mold on the traditional princess story.

Moana (Auli’i Cravalho), our latest Disney princess, is a curious child.  Growing up on her Pacific island, she has been brought up by her father and mother to be prepared to one day rule her people.  But at the encouragement of her grandmother, Moana has a longing for the sea.  When she is a small child, the sea “chooses” her, which is witnessed by her grandmother.  Her grandmother holds that information close to the vest until Moana is older and ready to hear it.

The island they have been living on has always yielded an abundance of fruit, flowers, fish, and beauty.  One day the fish leave the usual spots, heading out past the breakers to the larger ocean where the people have been forbidden to go.  Eventually the island as a whole begins to die.

The reason for this slow death taking over the island goes back many years where demi-god Maui (Dwayne Johnson) stole the heart of the island, a sacred stone, setting in motion the slow decay.  After fighting a fire demon, he loses his sacred hook, given to him by the gods, that enabled him to be a shapeshifter into various animals and the like.  Banished to an island, Maui’s celebrity-like legend where everyone loves him, becomes a deep-seated hatred by the various islands for being the cause of their demise. The creeping death will eventually drive Moana to the sea she has always longed for in order to find Maui and restore the heart of the island so that her people might survive.

Moana is a fitting tribute to a strong, courageous, adventurous people, and more importantly, is just simply a fun time at the movies.

Moana is a musical, and one that features the vocal styling of a pretty good voiced Dwayne “The Rock” Johnson. Who knew he could sing?  And the song his voice stars in is one of the strongest of the film, “You’re Welcome”. Why thank you!  The songs range from the more traditional fun songs Disney films are known for, to some that might be a surprise.  For me that was a song was Jermaine Clement’s (Flight of the Conchords) song, “Shiny”. While not the strongest song in the film by any means, it is a departure for typical Disney-fare, incorporating a real nice David Bowie vibe which is a fitting tribute, while using some of Clement’s trademark humor and fun. Clement plays a villainous crab named Tamatoa. Stick around to the end of the credits to see a funny scene that gives a shout out to the classic, The Little Mermaid. 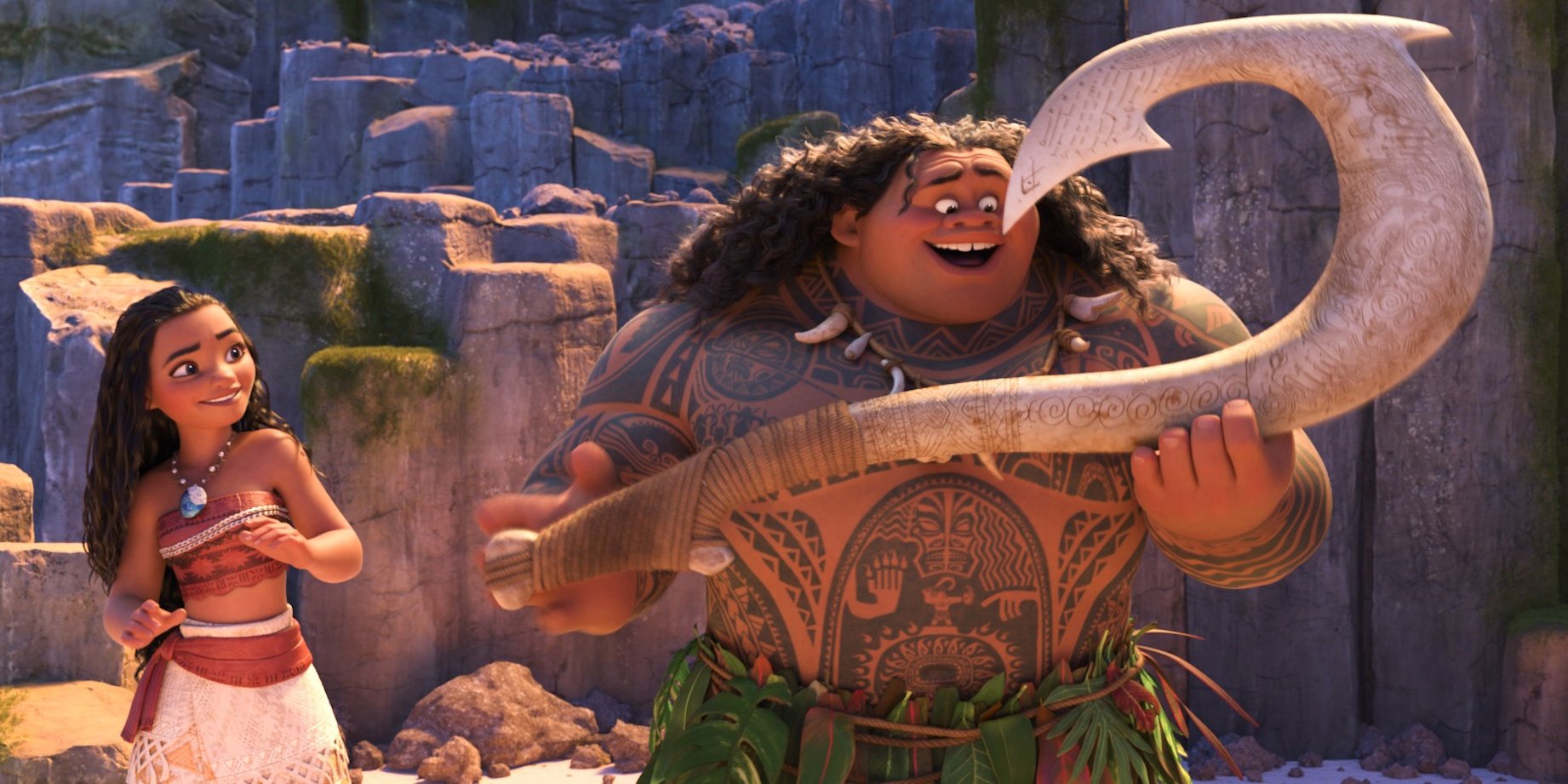 Speaking of music, the score is composed by Mark Mancina, who was an arranger on The Lion King.  The songs are primarily written by Lin-Manuel Miranda who is the talent behind the latest Broadway smash, Hamilton. Both Miranda and Mancina worked with Opetaia Foa’i, a Somaoan musician, and his band Te Vaka, a vocal group.  The result is a soundtrack that is actually borne of the Oceaniac region the film portrays.  This is not a whitewashed version of a Disney film about the region.  Its stars, songs, and influence are authentic as possible. From Dwayne Johnson’s Polynesian Samoan background, to its title character Auli’i Cravalho’s Hawaiian culture, Moana seeks to honor the region and the people it depicts, and avoid the criticism of films such as last year’s Aloha, that was insensitive to the Hawaiian culture.

Moana’s animation was a sight to behold, and it was impressive to see its ability to realistically depict traditionally difficult motions such as the tide and wind and transform it into an experience that felt real at times. The story, while not as strong as Frozen or Zootopia, is a fun adventure.  Some of the characters from the Polynesian legends and myths might be a little scary to the youngest viewers, but Disney mostly keeps things lighthearted enough to let it blow over pretty quickly. 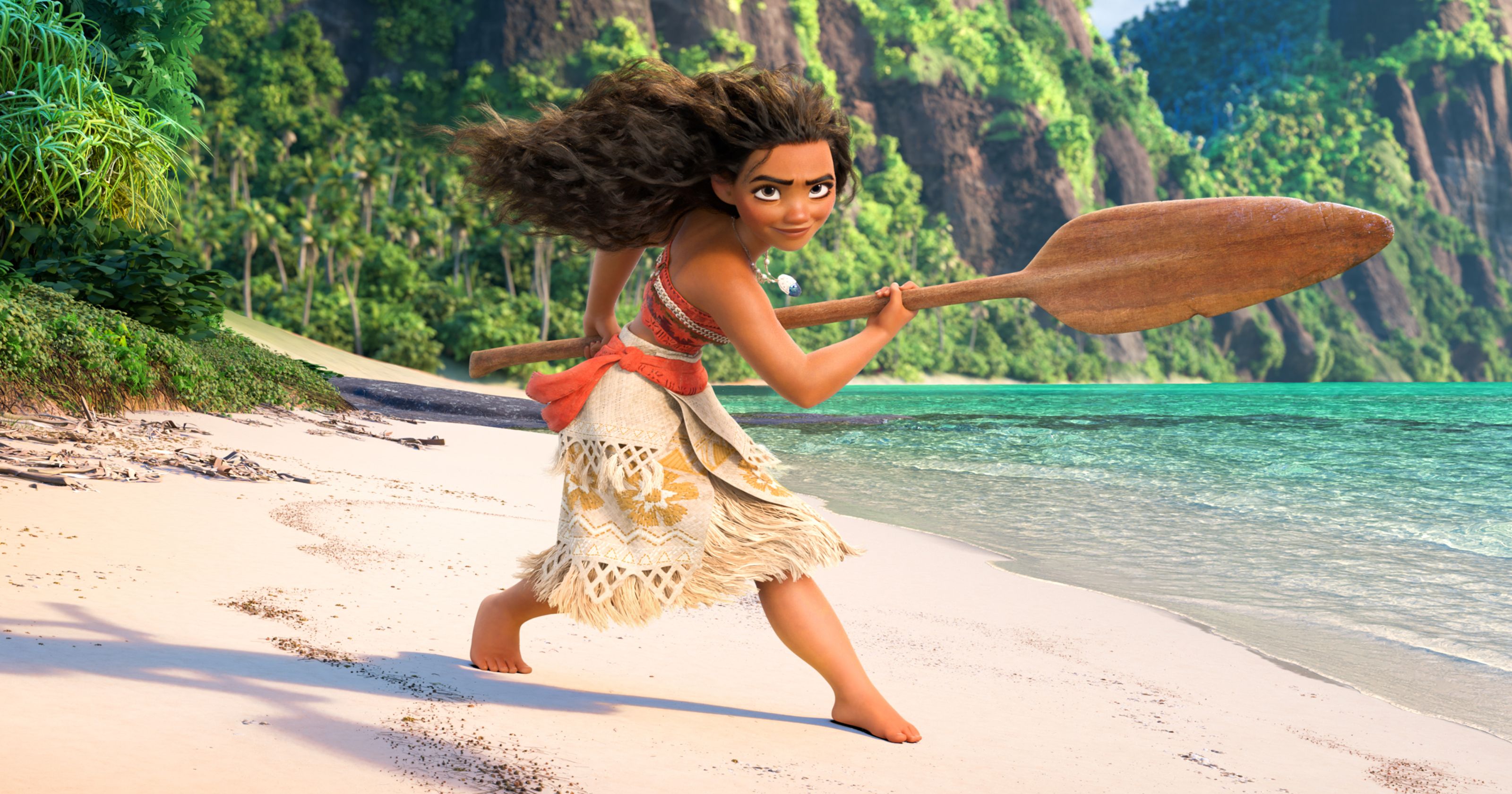 Like the documentary, The Eagle Huntress, which also opens this week, Moana is a female-centric heroine which should inspire girls especially, but also people of all ages.  What is unique about Moana as a Disney princess is that she breaks the mold on some of the traditional arcs that usually accompany this genre, and continue what was started in more recent films like Tangled, and Frozen of strong, independent women who are not in need of a prince to come.  Moana takes that a bit further and depicts not just a strong woman who is capable, but one who actually demonstrates that she is ascending to position of leadership that her title as princess implies, and not just another royal damsel in distress.  Moana is a fitting tribute to a strong, courageous, adventurous people, and more importantly, is just simply a fun time at the movies.