The Most Difficult Labour is Getting Through This Movie 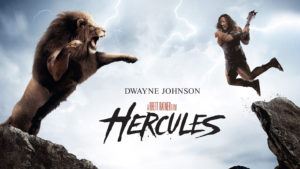 I’ve never liked Scooby-Doo.  It wasn’t just the poor animation and the inane laugh-track that I hated as a kid, but the very concept itself.  As a monster-obsessed child who shotgunned Godzilla marathons into my cerebral cortex, poured over those orange Crestwood monster books, and sought out every 1950’s atomic horror flick I could get my little eyeballs on, the adventures of Mystery, Inc. seemed to me like the biggest rip-off; the worst cheat in the world.  The promise of creepy monsters, ghouls and goblins, betrayed at the end as a sham:  it was Old Man Macready all along!  Even as a little boy, I thought that was bullshit.  To entertain notions of the wonderful and supernatural; a peek into the magical mysteries of the cosmos, only to pull the rug out from under all that macabre mystery and reveal it as nothing more than mundane, naturalistic trickery?  A travesty!  A crime against the imagination!

Welcome to Brett Ratner’s “Hercules”, the Scooby-Doo of Hercules movies.

The movie opens with brief snippets of Hercules fighting phantastycke monsters—a random montage of images, contextually void and woefully incomplete, cutting away just when things are about to get good.  At first I was aghast—the best moments from the trailers, dumped unceremoniously before the opening credits, here and gone in a flash.  Were they really going to cheat us out of seeing Hercules battle supernatural creatures?  Were they really going to blow past the best parts of the myth?  But the truth is even crueler—for it is all revealed to be a yarn spun by Hercules’ nephew, Iolaus, who essentially functions as Hercules’ P.R. guy.  It’s all a lie; hype to inflate Hercules’ reputation, in order to make his job as a mercenary easier and net him a higher pay rate.  The Hydra?  Just a bunch of jerks wearing monster masks.  The Nemean Lion?  Just a boring old ordinary lion.  And Hercules himself?  Just a regular guy who happens to be a little bit bigger and stronger than most people, with a team of mercenaries backing him up, whose feats he takes credit for in order to keep building up a legend.  It’s Old Man Macready all over again.

This premise could possibly work as a farcical action-comedy (especially if Hercules and his posse encountered an actual supernatural threat and didn’t know how to deal with it—tons of potential for drama and comedy there), but as a straight action-adventure-drama it has absolutely no reason to exist.  This movie is like the inverse of Zack Snyder’s 300.  Whereas that film took historical events and dressed them up in fantasy, Hercules takes fantasy and dresses it down into the mundane, as if it means to tell the “real” story of Hercules.  But this is beyond ridiculous.  Hercules was never a historical figure; he was always a myth; an ancient Greek superhero.  Imagine if someone made a new Superman movie that depicted Clark Kent using smoke and mirrors to trick everyone into thinking he had super powers.  That’s what this movie is.  It’s utter, complete, total bullshit.

I didn’t think it was possible that this Hercules movie could be worse than Renny Harlin’s The Legend of Hercules, which I reviewed at the beginning of this year.  But as stupidly inane as that movie was, at least it was about, you know, the legend.  Without the legend, what’s left?  What’s the point of a Hercules movie without Hercules?  This movie has no reason to exist.  And with a reported budget of $100 million dollars, it’s a damn waste.  Somehow, with a ginormous budget, hundreds of extras, and real-world location, Ratner has made this movie seem small.

This looks much cooler than it actually is.

Everything in this film just seems like a pale imitation of something much better; a faded photocopy of a photocopy of a photocopy.  Hercules does piss-poor impressions of Conan the Barbarian and Hercules:  The Legendary Journeys, and rips off moments from Gladiator, Star Wars, and even The Lego Movie, without the slightest shred of an idea as to why those moments worked in the first place.  It’s like that obnoxious guy at a party who makes you listen to all his terrible impressions.  Or it’s like watching someone use a bloated corpse as a marionette.  I don’t know, take your pick.  It’s kind of like both of those.

Hercules completely squanders its budget, its extras, its locations, and worst of all, its cast.  This is a movie that features Rufus Sewell, Ian McShane, John Hurt, and Joseph Fiennes, and gives none of them anything interesting to do.  The characters are all cardboard cutouts, with inane quips in place of actual character development.  This is a movie that takes the most charismatic action star on the planet and manages to make him lifeless and boring for the entire run-time.  Perhaps worst of all, this is a movie that is interminably tedious.  Renny Harlin’s version may have been aggressively stupid, but at least it swung for the fences, even if it struck out spectacularly.  By contrast, Bret Ratner’s version just bunts every time and walks the bases without any energy, charm, of dynamism.  It’s a vacuous, plodding drag of a movie; a meaningless vapour, hopefully forgotten in a week when Guardians of the Galaxy comes out and reminds everyone why they love going to the cinema again.