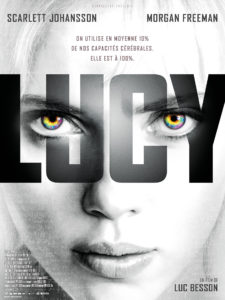 Luc Besson is too talented and too accomplished of a visual stylist to make a truly awful movie.  In fact, his sure-handed direction is the only thing keeping Lucy from being a complete debacle.  This makes the film the very definition of a “mixed bag.”  And while it’s not exactly a complete failure, it comes pretty darn close.  In the mixed bag that is Lucy, there are a few tiny gold nuggets to be found, but unfortunately they are tarnished by the rest of the bag’s contents – a steaming mess of hot garbage.

Lucy is a film that is predicated on one of the silliest premises in recent memory:  the idea that human beings only use 10% of our brains.  While this concept used to be taken as conventional wisdom, it has long since been disproven and shown to be very bad science/psychology.  But this is far from the silliest thing about Lucy—rather, it’s just the beginning.  From that premise, things just get goofier and goofier, to a nadir of stupidity that feels like something Besson came up with when he was five years old, never bothering to update. 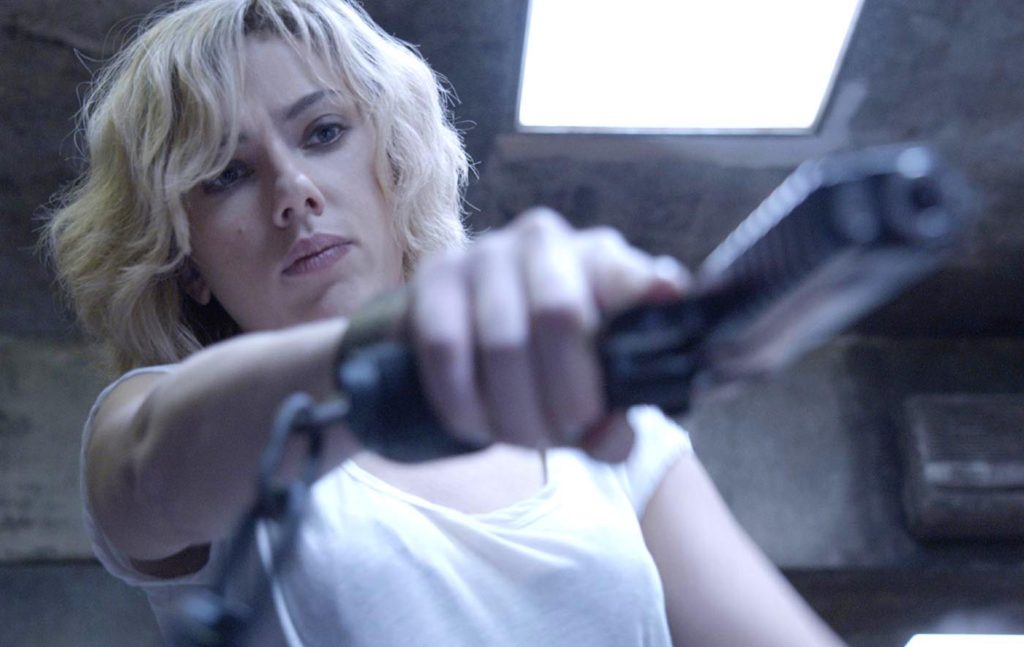 Apparently using 20% of your brain makes you good at guns, even if you’ve never gunned before, because reasons.

None of this would be a deal-breaker in and of itself.  After all, there are plenty of ridiculously silly films that are also quite charming and wonderful.  But most of those movies are also joyful cinematic experiences.  For example, Miami Connection is about as silly as they come, but because it’s so wonderfully true-hearted, optimistic, and earnest, you can’t help but fall in love with it despite its inherent ludicrousness.  Lucy, by contrast, is dire, mean-spirited, misanthropic, and depressing.  There isn’t an ounce of joy or fun to be found here.

One of the biggest problems with “Lucy” is Lucy herself (Scarlett Johansson), a character who is so thinly sketched and one-dimensional that she makes the Autobots from Michael Bay’s Transformers movies seem nuanced by comparison.

The role is a complete waste of Miss Johansson’s considerable talents, and it’s only when Besson allows her to truly emote (in two isolated scenes, the latter of which is completely contradictory with the rest of her performance) that the movie ever comes to life at all.

Lucy is named after the prehistoric Lucy, the famous Australopithecus whose skeleton was discovered in 1974, and who is referenced at the beginning of the film as the “first woman.”  Johansson’s Lucy is, I suppose, meant to be the first woman in the next evolutionary leap forward, but this happens in the most unbelievably ridiculous manner possible, and the execution is so ludicrously half-baked, you might even call it quarter-baked.  For all the sense the plot makes, Besson might as well just have had her get hit with a barrel of toxic waste.  It worked for Stan Lee, after all—in fact, most of Stan Lee and Jack Kirby’s creations are much more believable than Lucy is—especially the X-Men, whose genetic mutations are a far more credible suggestion for human evolution than overdosing on a new designer drug (seriously).

Honestly, the only palpable explanation for most of what happens in this film would have to be magic.  Nearly every ability Lucy gains as her “brain capacity” increases only makes sense if she’s some kind of witch (something one of the characters actually calls her at one point), or if she’s channeling some sort of ancient goddess or something.  Otherwise, everything falls apart within minutes.  But with Lucy, Besson seems determined to make some sort of hard science-fiction story in the vein of 2001:  A Space Odyssey (from which Besson borrows liberally for both the opening and closing of this movie).  But in order to make serious, hard science-fiction, your fiction has to be based on, well, science; not nonsensical gobbledygook.  His last sci-fi movie, The Fifth Element, may have been dumber than a bag of hammers, but at least it was pulpy, goofy, silly fun (for some—I myself was never able to move past its inherent stupidity).

None of this would matter if there was something—anything else in the movie to hang your hat on.  Movies don’t live and die by logic, after all; they succeed based on building an emotional connection with the audience.  But that is Lucy’s biggest problem—there simply isn’t any connection to be established.  Before Lucy’s evolution, we know nothing about her.  We never even learn her last name.  She is a generic American student who is staying in Taiwan for unknown reasons, dating a shady drug smuggler for unknown reasons, who tricks her into being a human mule for unknown reasons.  Any pathos from the character comes from Johansson herself.  And while she does an admirable job, the script gives her nothing to work with.  We have no reason to care about Lucy other than any feelings we might already have about the actress.  This is lazy writing, poor cinematic shorthand, and no substitute for character development. 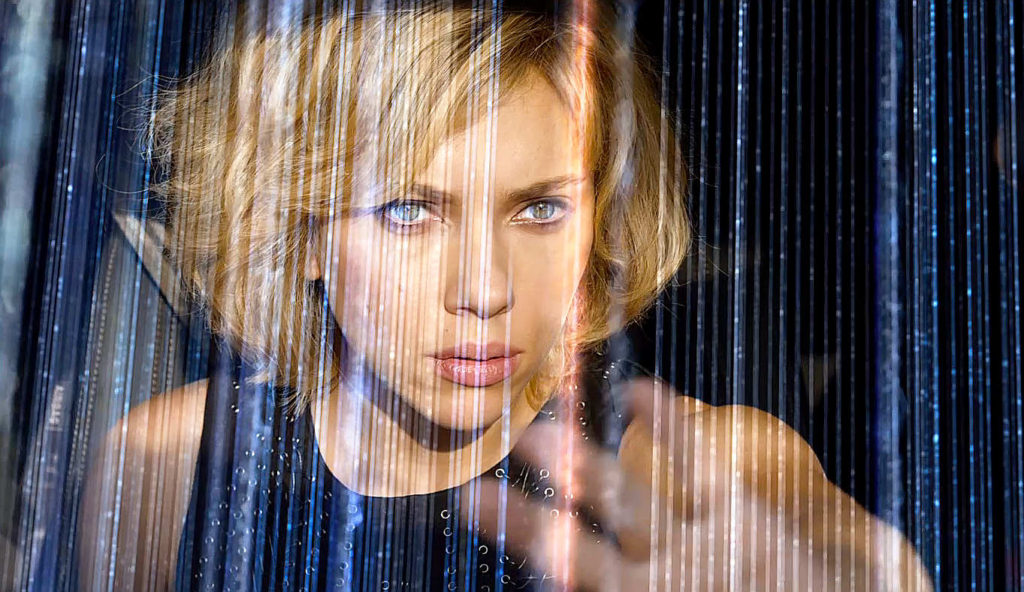 Apparently using 70% of your brain means being able to manipulate cell phone signals, because oh whatever I give up

Once Lucy’s brain capacity begins to increase, this problem only gets worse.  In Luc Besson’s world, human evolution means the purging of all emotion and feeling—in other words, everything that makes us human.  And when your character has no humanity, how are we as human beings supposed to relate to them?  Lucy basically evolves into the Terminatrix:  a sociopathic Überwensch with no humanity left.  She kills indiscriminately with no regard for morality or consequences, in pursuit of nebulous goals that change based on the whims of the screenplay.

Lucy seems like Luc Besson’s attempt to write an ascending goddess, but all of this has already been done—a hundred times better—by Alan Moore decades ago.  The character of Dr. Manhattan from his magnum opus, Watchmen, was a poignant examination of the superman-cum-god, exploring the moral, spiritual, theological, scientific, and philosophical complications inherent in such a premise.  Lucy is the kid on the playground whom no one wants to play with, because she keeps inventing infinite powers that always defeat everyone else.

Moore also had the good sense not to make Dr. Manhattan the main character.  Part of what makes his story arc so fascinating is the very human characters that surround him—how they react to him, how he reacts to them, and how they affect each other.  Johansson’s Lucy reacts to nothing, and very few of the characters in the film have believable reactions to her, either.  She’s simply sleepwalking through the motions; her story devoid of any conflict whatsoever—you know, conflict?  The basic building block of drama?  Don’t bother searching for that here; you won’t find a shred of it in Lucy’s story.

Of course, as a master of the action sequence, Besson still needs to have his big car chases and shootouts—so he unloads the brunt of the action onto a sidekick that Lucy picks up in Paris; a French detective who follows Lucy around like an unquestioning puppy dog.  But this only serves to highlight the hatefulness of the film—the Taiwanese gangsters pursuing Lucy across the globe cause a ton of collateral damage, with no regard for the numerous bystanders they kill in their quest to recover their drugs.  Yet Lucy doesn’t do anything to stop them, even when she has the chance.  She just sort of temporarily floats them out of the way and moves on.  It’s almost like she’s too bored to bother (you can almost see her stifling a yawn); yet she has no problem using her telekinesis to casually toss occupied cars out of her way—sending them crashing into walls, light posts, traffic barriers, and each other, to the sickening (and surely fatal) crunch of metal on metal—during a car chase in which her car isn’t even being chased (she just wants to get to where she’s going faster)!  Not to mention the fact that if she has the power to telekinetically swat cars out of the way as if they were gnats, then she could easily just fly.  Seriously—that’s how it worked in Chronicle—a movie that came out two years ago, by the way.

I know I said that logic and plot holes aren’t the most important thing (and I stand by that), but when they lead to your protagonists thoughtlessly murdering innocent bystanders simply because she’s in a bit of a hurry—while letting the bad guys live—well, that’s a pretty important plot hole, I’d say.

If I were being charitable, I might surmise that Besson may be making some sort of meta-commentary on the inherent ridiculousness of the modern superhero myth, juxtaposed with the fanboy obsession of making characters originally written for children into dark, gritty, “adult” stories—but honestly, that would just be me projecting onto the movie, and Luc Besson has done nothing in the twenty years since he made Leon:  The Professional (which will likely forever stand as his sole masterpiece) to earn any credit that would be giving him.  Leon was a movie that succeeded largely because the heart and soul of that film was the very real, very human relationship between the grizzled hit-man and the little lost girl.  But Lucy is like the anti-Leon:  heartless and soulless; a souped-up shambling zombie of a movie.