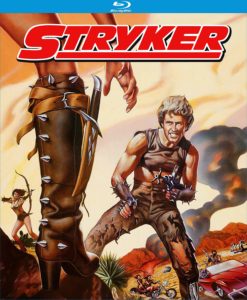 “Whoever controls the water, controls the world.”  So says opening Voiceover Guy, as we see footage of nuclear annihilation.  The starkly serious political statement is unmistakable, and in 1983, prescient.  But with that out of the way, the film is free to wallow in the promised high concept driven sex and violence, haphazardly wrapped in a half baked storyline.

Imagine Mad Max: Fury Road, then slash the budget by five figures and the vision by 90%.  Then replace all of the newer film’s female empowerment with pure objectified victimhood, and swap polecats for a few smoke grenades, and you’ve pretty much got it.

A girl (Andrea Savio) flees for her life across the barren dunes and dull rock formations that make up this nuked-out landscape.  Seven or eight faceless jerks in black leather pull up, barely fitting in their war-torn vehicle of choice.  “There she goes!  Get her!!”  Sooner or later, they’ll get her.

Everyone wears a headband.  Welcome to the future.

Enter Stryker, our singular hero with a heart of gold and a bunch of guns (Steve Sandor, who’s IMDb photo was recently a van in a field).  With his curly puff of hair, cool guy beard and piercing eyes, he’s just the kind of interchangeable early 1980s action hero we’ve come to expect in films of this ilk.  Though like Snake Plissken before him, a girl in a desperate situation doesn’t necessarily command immediate rescuing.  Better to intentionally let her get picked up and dragged back to the bad guy’s place, so that this exploitation movie can really earn it’s restricted rating.  Also, a few more car chases and shootouts never hurt. 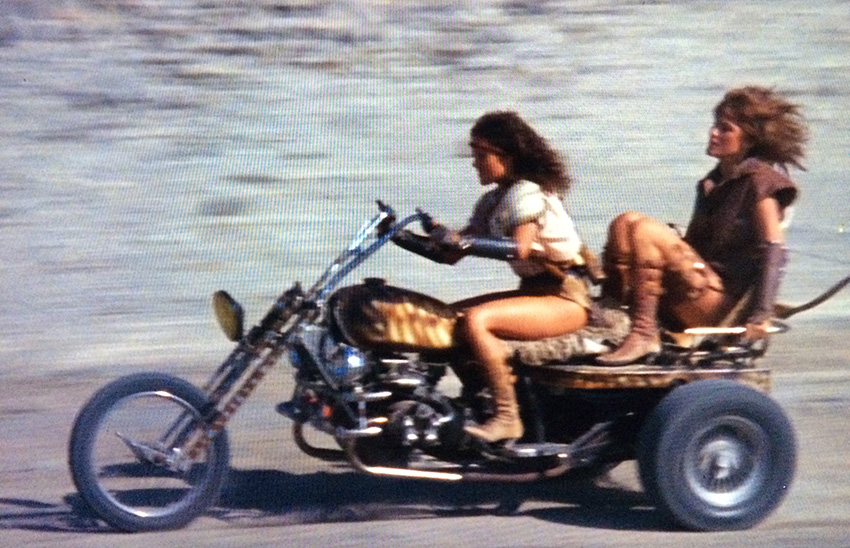 Girls on a three-wheeler hold on for dear life in STRYKER!

Nothing makes much sense, and the wrongheaded ugliness of rape as titilation, so prevalent in the era, occurs big time in the first twenty minutes.  But that glaring infraction aside, Stryker is one blast of a good-bad-movie to watch and have fun with.

Tricked-out junkers roar unceasingly down the road, but they’re always same two or three.  For wardrobe, it’s S&M straps for the bad guys, leather vests for the good guys.  Every girl is potential centerfold material, except for the ones who are actual centerfolds.  1979 Playmate of the Year Monique St. Pierre has a supporting role as a no-nonsense leader of an all female resistance.  They all wear what must be the only clothing options left for them at this dastardly world’s end: super short leather hot pants, sheer white tops, and knee-high boots.  And white plastic football shoulder pads, for good measure.  Everyone wears a headband.  Welcome to the future. 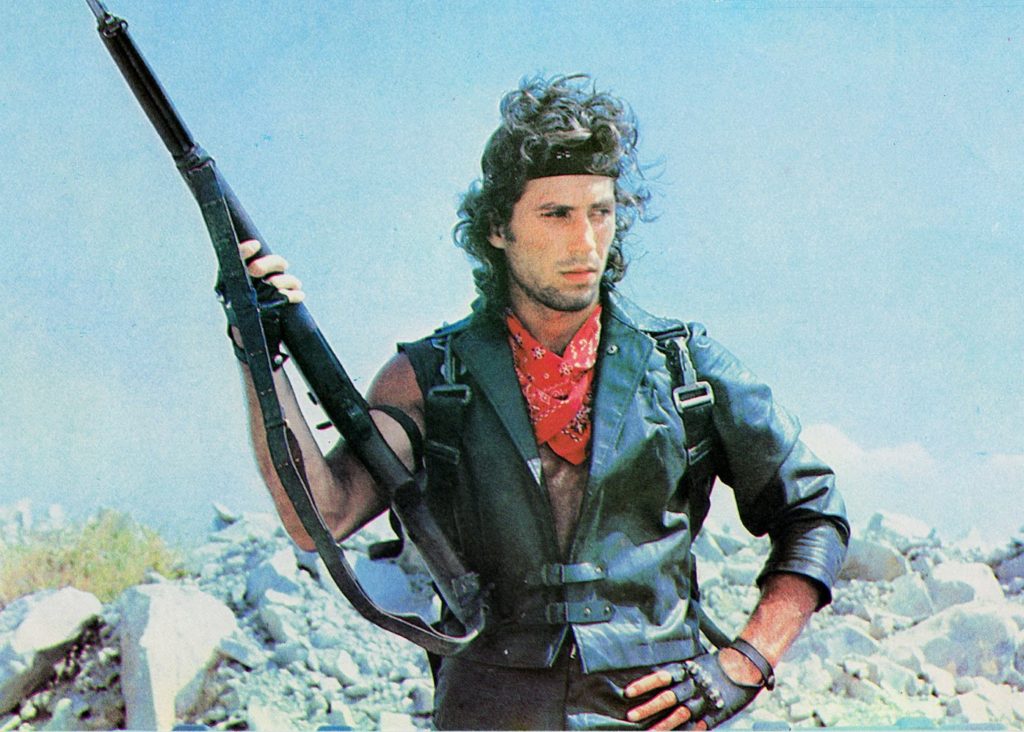 After The Road Warrior hit in 1981, filmgoers found themselves in a repeating cinematic wasteland of rough desert terrain, marauding marauders, and pedal-to-the-metal action.  Again and again, movies, music videos and even TV shows copped George Miller’s high concepts and visual aesthetic in an attempt to repeat its innovative success.

One needn’t have been a fan of that first Mad Max sequel, nor even be directly familiar with the knockoffs to intuit its effect, nor to know that imitations had become a dime a dozen.  Case in point, me.  Not yet old enough for theses films, then the bastion of stylish hard-edged R-rated action, the movement both zipped by in my peripheral vision and nonetheless influenced me.  But what were these Road Warrior clones, and where were they coming from?

Mostly, Roger Corman.  That beloved penny-pinching schlockmeister who made a career, nay, a business model, on churning out exploitation, launched full throttle into the post-apocalyptic chic.  By the 1980s, it’s probably safe to say that Corman’s direct involvement with his company’s output was more on the minimal side.  This model influenced a multitude of motivated copycat profiteers the world over. 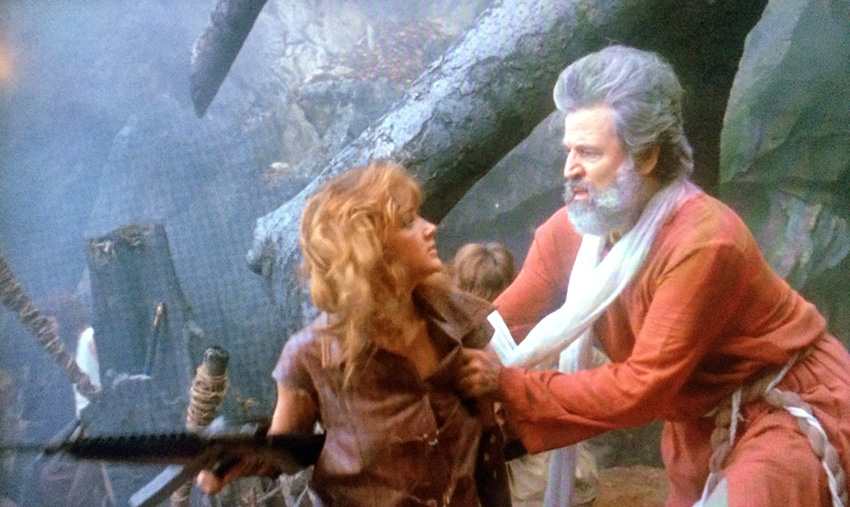 Not Stryker, nor Moses.

Enter Filipino filmmaker Cirio H. Santiago. Santiago, prolific to a blunt tee, veered from a film production family into a reliable career of cheapo movies, with seven, count ’em seven, post-apocalyptic warhorses at the crux of his output.  The first, distributed in the U.S. by Corman’s New World Pictures, was (dramatic pause) Stryker.

Kino Lorber Studio Classics’ blu-ray is a very nice widescreen transfer of a film that was no doubt only previously available in far inferior versions.  Bonus features include a chatty interview-style commentary track with exploitation filmmaker Jim Wynorski, who knew Santiago and directed most of Stryker‘s remake, Water Wars.  There are also trailers for most of Santiago’s subsequent future wasteland films, which hilariously unintentionally seem to blend together and all start with either “In the wasteland…!” or “In the future…!”  This calls for a box set, KL!

Action, action, action ensues, and there’s nothing anyone can do to stop it!  Thrill to the cardboard cars exploding!  Amaze at the chase scenes made up of moving vehicles in one shot, and then clearly not moving for the driver’s close-up in the next!  And legitimately marvel at the way Stryker clips along, and is never dull! 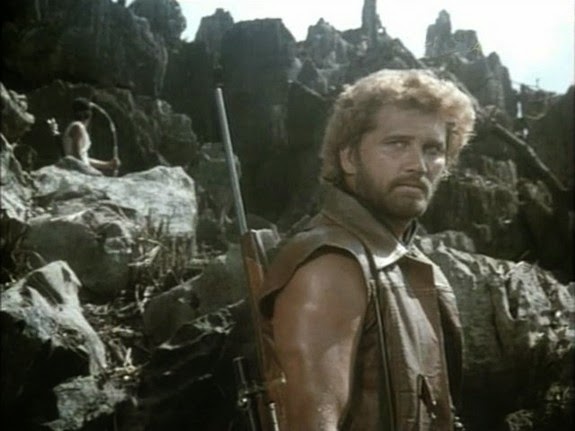