All Other Summer Films Are Left In The Dust. 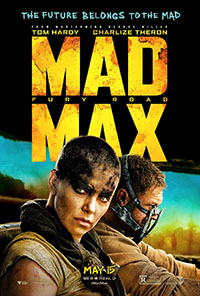 Although it would be generally agreed that apocalypse is serious stuff, the movies have a way of turning the end of the world into adrenalized carnival attractions, doomsday grafted onto pacifying chaos entertainment for the comfortable and unengaged masses. But “apocalypse” also means “vision” – something that Mad Max creator and Austrailian filmmaker George Miller, even at age 70, has no shortage of. This is him, following a long spell out of the desert making the weepy but effective Lorenzo’s Oil, the effervescent Babe movies and two animated Happy Feet films, getting back to where he once belonged. The result is this immersive, gauntlet-casting graphic novel of a movie.

Fittingly for a film that started life as a pile of drawings rather than a typed screenplay, not much is said in the course of the unrelenting, fully realized thrill ride that is Mad Max: Fury Road. Anything said out loud is decidedly choice. It’s bombastic, colorful, imaculate, ferocious, and amazing. The claims of it being “a 120 minute car chase” aren’t off base. But make no mistake, the film is not about nothing. Upon exiting the film in a state of breathless, throttled cinephilia, the above, opening quote were the words I chose. What’s the point of more loud attention-vying summer movies beyond this one? We should call it right here in mid-May.

It’s the kind of filmgoing experience that leaves viewers exhausted and pumped. There’s more vision, more imagination, more roar in the first few minutes of “Fury Road” than any other film this year. Following this, there’s no need to see more movies, “Mad Max” or otherwise.

Kudos to Warner Brothers for taking the dice down from the rearview mirror, and rolling them in a big way. It’s like George Miller has had all of this kicking around in him for four decades, and the confident release is this, his return to his dystopian outback world for the fiercest of rides. It is felt as nothing less than a concussion blast of silver screen nirvana.

The ideas, rules, and power structure of this post-apoctalyptic desert world aren’t explained so much as they’re driven by, fast. Miller isn’t interested in the boring parts, only the cool parts. Do not be intimidated – the fragments and hints offered are all anyone needs to fill in the gaps. Just strap in for the chase. This new Mad Max is the freshest, most cinematic, most kinetic, most absorbing ride in a long, long while. 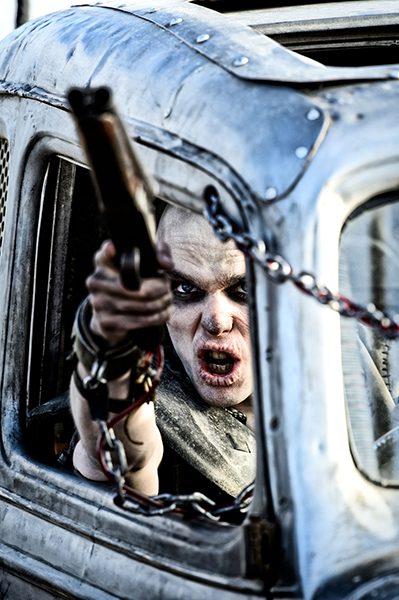 I say that without having ever effectively seen the previous films, Mad Max, The Road Warrior, or Mad Max: Beyond Thunderdome. Many hazy years ago, I saw portions of them on TV. Hence, I couldn’t begin to recall the mythology. My best intentions of getting caught up before Fury Road didn’t pan out, leaving me to place the narrative burden on Fury Road. It turns out that Miller and WB of course fully understand that they cannot expect today’s audiences to arrive knowledgeable about a 35 year old trilogy. I, like so many others, know this world in spite of myself. Miller’s vision has become cultural canon, imitated to death but never replicated. It’s fumes have been in the air for decades. Nevertheless, scores of younger, unsuspecting filmgoers will emerge from Fury Road, their world forever rocked.

Those films turned out to be starmaking vehicles for a young Mel Gibson, saddled in the glassy-eyed shotgun-toting shoulder-padded role of the title character. Now it’s Tom Hardy’s time for a full dose of Miller madness. Hardy, a much-celebrated actor previous to all of this, may or may not emerge a star the calibre of Gibson, as his character, while perpetually present, is often drowned out by the sheer overwhelming aesthetic all around him. He begins the story with a garden trowl bolted over his mouth, and doesn’t get much more vocal even once it’s removed. 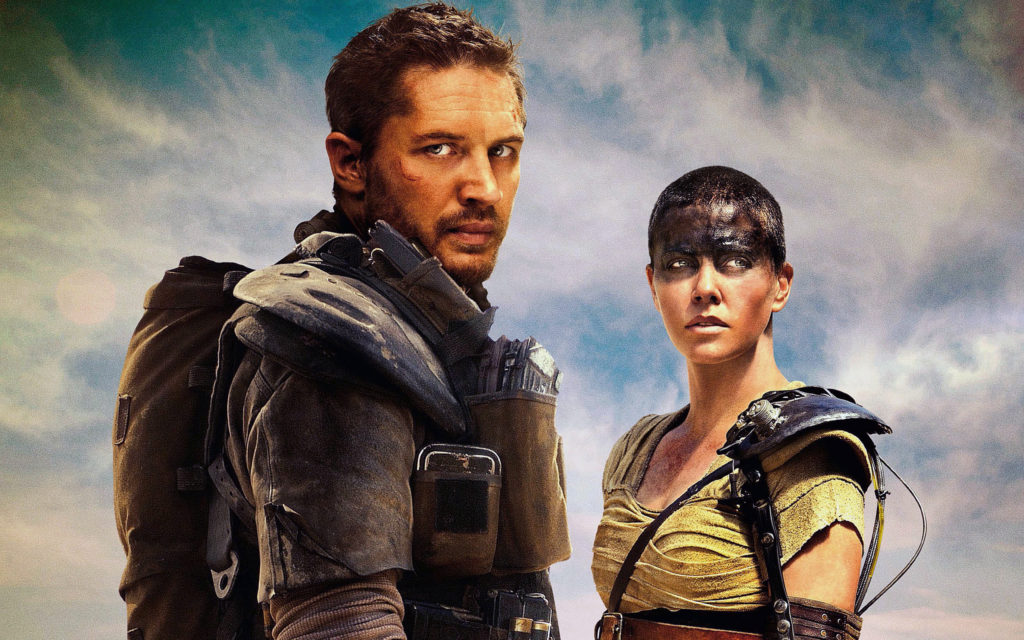 Charlize Theron might just be the true lead, if only by a gear shift. She plays a bald, one-armed driver of a tricked-out big rig, full of contraband women. Her character drives to feminist extremes, and might just take the movie along for the ride. Awesomely, she’s called Imperator Furiosa – whatever that signifies. Names are wielded like weaponized bragging rights, passed along with hollow pride widely embraced but never understood. Names like “Immortan Joe”, “The Bullet Farmer”, “The Organic Mechanic”, and uh, “Rictus Erectus”. I’m not making any of this up, nor can I explain it at this juncture. It’s not that it’s hard to care about such a detail, it’s just that itdoesn’t matter – and it doesn’t matter in the best way possible. This is a fully formed crazy world, and we’re just passing through. We just happened to happen by during the mother of all desert car chases. 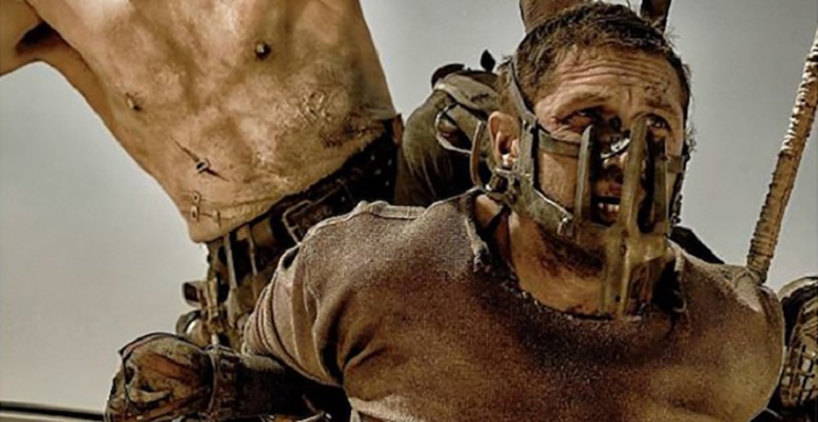 Miller’s Mad Max world is one where nothing good can happen. Survival is all that there is, inertia and instinct being the only justification for it. A Godless world it may be, even as a half-realized Christ figure lurks amid the backseated allegory and metaphor of it all. Considerably more foregrounded is the domineering religiosity of the evil overlord’s society. Salvation is works-based, the chosen anointed with spray paint, right in the kisser. Redemption is a distant concept, hope is a dangerous notion. It’s a cinema world awash in religion that is touted as despotic and false. As with all tyrants who use religion for power (a highest form of evil, from Jane Eyre to The Night of the Hunter to Fanny and Alexander to Star Wars), his understanding of the water of life is not as life-giving satiation but as another element to be withheld. In a real life time of draught and fast survival, these pushed notions of Fury Road ring loud and clear.

The fleet of imposing, tricked-out mutant cars are loud, rusted, diverse and impossible to look away from. They play out this reviewer’s arrived-at notion that well-crafted vehicular action, with its speed and throttle, is a natural fit when it comes to base-level-effective cinema.

The wardrobe is a freshened throwback to the controlled dystopian vision of a 1000 Road Warrior-inspired music videos of the early 1980s. The no man’s landscape (not actually Austrailia this time, but Namibia in Africa – meaning that one of the hottest places on Earth just got hotter) is an imposing run of perpetual dust and unfriendly rock formations. 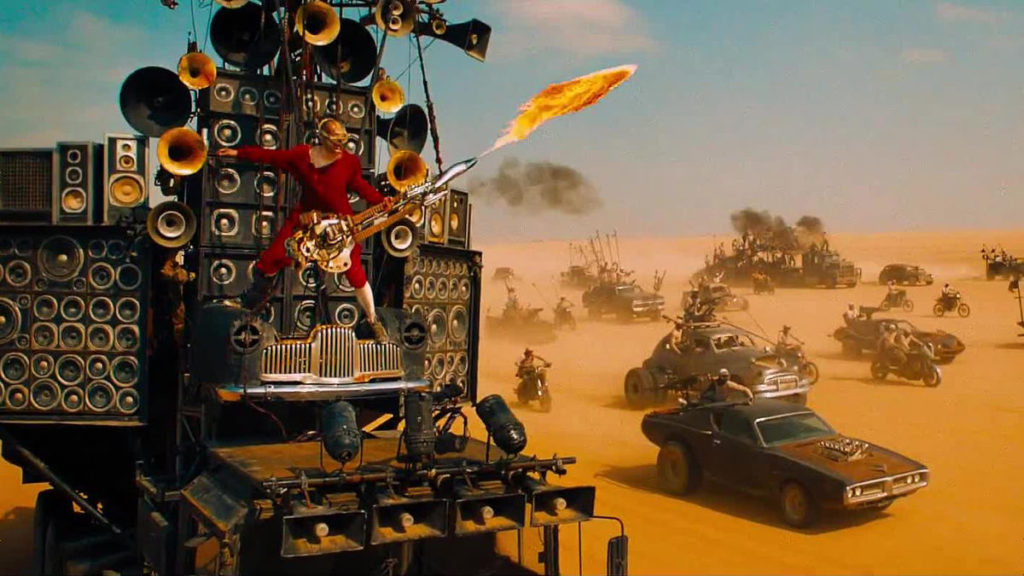 When this band hits the road, they really mean it!

With the help of dozens of deep-reving engines and a gripping score by Junkie XL (not a George Miller name!), Fury Road positively rocks. In a film overrun with extensive visual splendor, its soundscape nonetheless stands as one of its biggest assets. For good measure, one of the maurauding vehicles is equiped with a drum section and a shredding electic guitar player, bungeed to a stack of amps. Naturally, the guitar shoots fire.

Let’s make it official: All posers may now stand down. This apocalypse is also a beginning. It will challenge, disrupt, and at times disturb. And in the cinematic summer of 2015, it’s all the pedal-to-the-metal vision anyone needs. 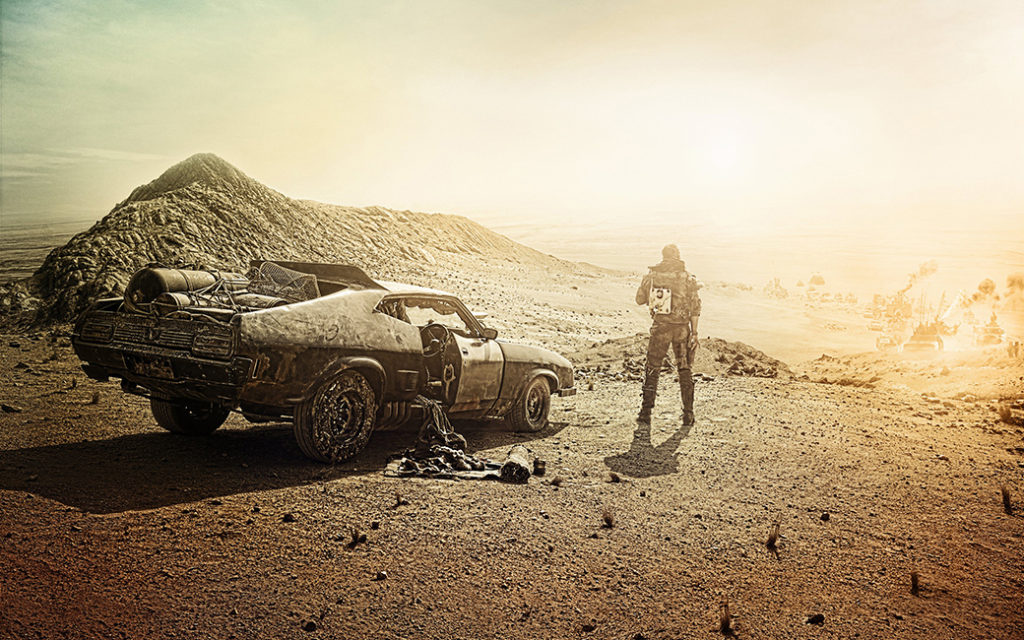