THE TRIP TO ITALY – Film Review 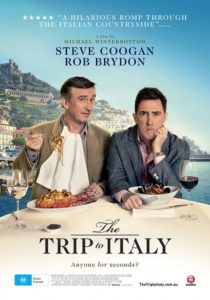 Steve Coogan and Rob Brydon were hilarious in their film, The Trip (2010).  Both play fictional versions of themselves and the banter between them is priceless.  In The Trip, Coogan is asked by The Observer newspaper to travel around Great Britain writing about his experience eating meals at some picturesque locations.  Seeing it as a chance for a romantic getaway with his girlfriend, he resorts to inviting his friend Rob when his girlfriend heads back to America as they take a break in their relationship.  Much of the first film was about the interplay between Steve and Rob, and their brilliant impersonations of famous actors, movies scenes, and poets.  We also were given a glimpse of their private lives, behind their famous personas.  Rob was the family man with a new daughter, while Steve was the divorced playboy, hooking up with whomever he fancied on the trip. Steve also has a son whom he tries to connect with despite the obvious distance present in their relationship.

The Trip was a success and has led to an unlikely, yet welcomed sequel called The Trip to Italy.  As we pick up four years later, Rob calls Steve and informs him that The Observer is looking for another food article, only this time they will be sampling the cuisine around Italy.

At first glance, there is much familiar territory in The Trip to Italy.  Rob and Steve again engage in brilliant dialogue around delicious looking meals in exotic locations.  They even momentarily resurrect their hilarious Michael Caine impersonations, discussing how many Batmans he has buried, while in character as Michael Caine’s version of Alfred, Bruce Wayne’s butler.  There is also a funny exchange as they reenact a fictional situation of a PR agent trying to share with Tom Hardy, how director Christopher Nolan cannot understand a word he is saying while Hardy is playing the vilian Bane in The Dark Knight Rises.  They quickly shift to adding an impersonation of Christian Bale, as Bale and Hardy battle between who is the most un-understandable character in the Batman film. 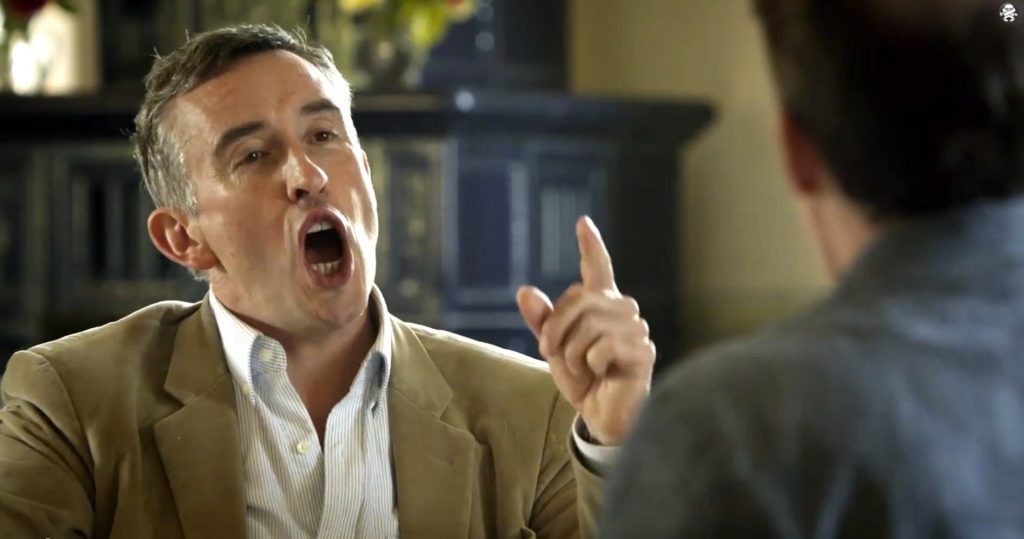 There are repeat performances of their clever impersonations of every James Bond actor, Al Pacino and Marlon Brando from their Godfather roles, and an ongoing discussion about Alanis Morrissette’s breakout 1990’s album Jagged Little Pill.

Amidst the humor, however, is the continued development of these actor’s fictional selves.  Coogan seems more content to spend more time with his son, and is less interested in being 25 again, as his character was in the first installment.  Rob is still the family man, but has almost traded places with Steve’s narrative from the first film, as he is more willing to look for opportunities to escape his home life, including looking for film work in America. 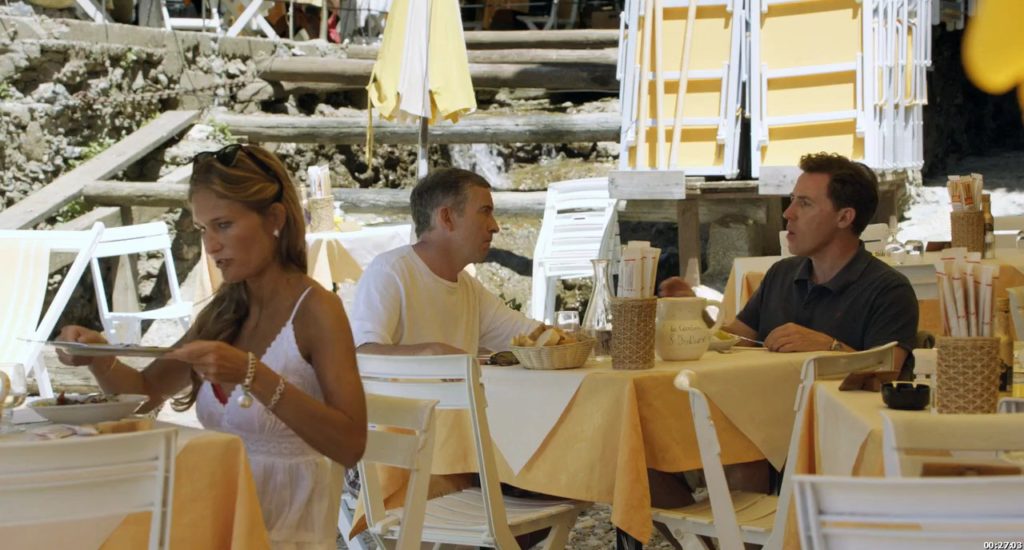 The Trip to Italy combines the humor, banter, and character development of the first film with amazing scenery from across the Italian countryside.  Having personally spent a month in Italy this summer it was fun to see the beautiful locales all across the Italian countryside and coast where so much rich and delicious food originates. If you have ever been to Italy, you’ll appreciate the locations, the portrayal of driving (especially in Rome), and the conversations that are had around the dinner table.

The Trip to Italy is a worthy sequel that captures the heart and humor of the first film while allowing for further character growth and new locals.  Lots of the humor from The Trip is carried over, but this is not simply a rehash of the same old jokes even though the premise for why they are traveling is the same.

By changing the locale, some of the gags are developed into refreshingly irreverent exchanges such as Rob Brydon’s “man in a box” routine while talking to the remains of a Pompeii victim, who just happens to be in a glass box.  While seemingly in bad taste, this sort of comedy bit allows for a believability to exist between the characters that complements the fact that these actors are basically trying to be a version of themselves, capturing their real life style when interacting with one another.

While it is not necessary to have seen The Trip first, you can catch it rather easily on Netflix streaming (it is available at the time of this review) before making your way to the theater to catch its entertaining follow-up, The Trip to Italy.