I learned a strange thing while listening to Troy Howard’s audio commentary on the recently released blu-ray of Rich and Strange. Alfred Hitchcock was developing this film at the same time as his Number 17. Hitchcock made Number 17 because of a contractual obligation. As a result, he wasn’t excited by it and subsequently always had a dim view of it. The movie he really had his heart set on making was Rich and Strange. The thing is Number 17, for all its faults, is crackling with energy and the story, such as it is, moves forward with heedless abandon. Rich and Strange, on the other hand, is slow and lifeless. It shows little of the visual style or wit that would come to be Hitchcock’s signature.

The opening sequence to the film is an exception to that. It’s a montage of the hustle and bustle of city life, and the office drone named Fred Hill (Henry Kendall) who’s caught up in the middle of it. Hill is frustrated and bored with his life and the montage effectively demonstrates the drudgery of his day to day existence. Its speeded up footage, exaggerated actions, and frantic cutting suggest that Rich and Strange will be a comedy. But the laughs never come.

Hill and his wife, Emily (Joan Barry), receive a convenient inheritance, which they decide to use to travel the world. There’s a brief stop in Paris, conveyed via another rapid montage of stock footage intercut with shots of Hill and Emily gawking at the sights. Hitchcock makes a peculiar use of jump cuts here, and I get what he was trying to convey. I’m just not sure it works as anything other than a distraction. After Paris, the two hop on a steamship bound for exotic ports. On the voyage, the two of them each meet another potential paramour, and it seems their marriage might be doomed.

Howard’s commentary track mounts an impassioned defense of Rich and Strange, even as it acknowledges it as one of Hitchcock’s lesser works. The fact is, of all of the Hitchcock movies I’ve seen to date (nowhere near a plurality of them, admittedly- Hitch was a prolific director), Rich and Strange isn’t just a lesser work, it’s maybe the worst. It’s not just a bad Hitchcock film, it’s a bad film, period. Slowly paced, unfunny, and featuring a cast of unsympathetic non-entities (the characters, not the actors, all of whom do the best with the turgid material they’ve been handed). To top things off, we’re treated to some terribly racist humor at the expense of some Chinese sailors in the last act. Hitchcock reportedly thought this material some of the funniest he directed, but Hitchcock isn’t known for his appropriate sense of humor.

Kino Lorber’s blu-ray features a new 4K restoration by the BFI. It looks and sounds great. There’s an audio clip of an interview with Hitchcock by the director Francois Truffaut, Howard’s feature-length commentary track, and an introduction to the movie by author and director Noel Simsolo. Kino Lorber has put together a nice package for this early sound Hitchcock film. I wish the film itself merited such efforts. As it is, this one’s for completists only. 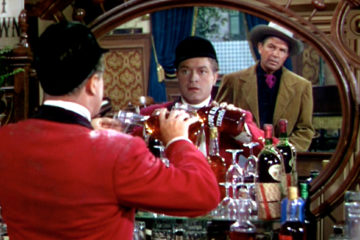