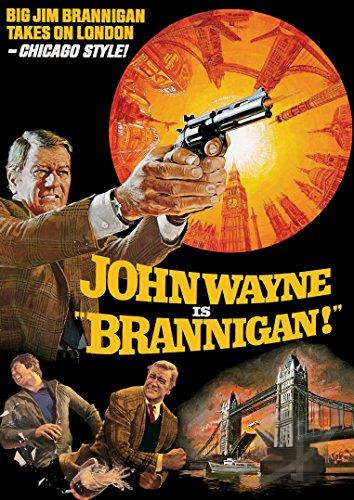 John Wayne, America’s cowboy dad, pulled an Eastwood-out-of-the-desert move and did two back-to-back cop movies in the mid-’70s, trading in his chaps for sports coats, his horse for sports cars, Indian chiefs for police chiefs, cow-punching for crook-punching – I could go on – but all of these genre swaps lead to weakly-edifying ends. McQ, the first of the two, in 1974, already places Wayne one order of magnitude away from everybody’s comfort zone, swaggering not with the pure, white-hatted rectitude of the plains, but lumbering squint-eyed amidst the moral ambiguity of concrete hoodlums and disposable rules. Already pushing 70, he’s ill-fitting to the world of gritty, Dirty Harry-style foot chases and crash-up derbies on the open highway.

But Brannigan, only a year later, disintegrates any capital McQ might have slimly gained, comfort-zone wise, by moving the action from the mean streets of Seattle to the prim lanes of London. A solid Richard Attenborough is the screaming chief this time, only he doesn’t scream, he glowers courteously, and all he has to reprimand the loose cannon over is that he carries a gun at all. And what little tread we get from the story – another tried-and-true bobbies-and-robbers yarn – should be from the natural, humorous tension of seeing John Wayne in delicately-appointed hotel rooms and elegant, candle-lit restaurants. But director Douglas Hickox never makes these moments seem more than just uncomfortable for the Duke, making it look more like he lolled onto the wrong stages at the studio, got wardrobed out, and fell into a Michael Caine gangster melodrama.

It’s easier to imagine, say, the aging Robert Mitchum in place of Wayne, better matching the Watergate-era spiritual fatigue of the time, the hang-dog American discovering in true, dark ’70s style that corruption is not just an American pastime, that rebellion against institutional authority is a given knee-jerk of the times, even across the pond. But Wayne can’t avoid his innate integrity, his righteousness always right, and his rule-breaking a stretch. So he has to stuff the corners of his persona down into the dress shoes of his part – he plays hang-dog and tired, but he’s too clean and all-American in the mythical, blue-blooded way, not the coarse, cynical way. Mitchum’s entire body of work points to this movie, kind of a Friends of Eddie Coyle on the Thames, as always about a man fighting to transcend that natural look of lazy corruption, where Wayne’s on-screen fatigue, going back decades, comes from a life of fighting the lazy corruption of Mitchum-types.

So Wayne is weighed down by the look of effort that comes from adjusting to the genre proper, and Brannigan is just the run-of-the-mill cop show plot draped in the Union Jack, but the man’s still an icon with undefeatable screen presence – a supernatural dollop of charisma that could never be dimmed by mere age or story cliche. He’s still slow-burning combustibility in a slow-motion body, corralling that massive frame into those big, can’t-miss gesticulations: a sweeping hand where stillness would do, a slammed door as extension of his walking myth-hood. It’s this perfectly natural exaggeration, if anything, that helps him fit into what comes off as a near-parody of a ’70s cop movie, but thank the movie gods his next two films (his final ones) were both back to westerns, where his enormous frame and long-drawling persona could be fixed forever against wide open skies and the expansive canvas of America’s preferred mythology of hope and expansion, not petty depravity and vice.