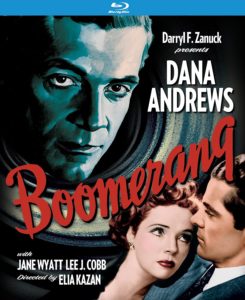 In a sleepy yet bustling Connecticut town, a priest shuts off the lights at his church and steps out onto his city’s streets, where a gun is promptly put to his head. As the killer pulls the trigger, the murder is witnessed by a coterie of shocked bystanders. The shadowy killer absconds into the night, and this unexplainable bloodletting begins to take shape in this, Elia Kazan’s tightly constructed crime procedural based on a true event. Boomerang is the kind of noir movie we love from the get-go. If you’re someone who wonders how justice can sometimes go so horribly wrong (as in the recent TV hit Making a Murderer, for instance), Kazan’s film is here to reveal that it’s the kind of thing that’s always been happening, and is likely to happen again.

As seen on the new Kino Lorber Blu-Ray, Norbert Brodine’s gorgeous black-and-white photography sometimes looks as though it was shot yesterday, with his stark overhead lighting often feeling like work years ahead of its time.

Pressured by the press to find the killer, cigar-chomping police chief Lee J. Cobb stomps on the necks of his detectives (led by Karl Malden), determined to ferret out the killer forthwith. But with little description to go on, they’re forced to look for suspects based on the anonymous clothes he was wearing. After a hastily produced lineup (featuring a cameo by longtime Kazan friend, Death of a Salesman playwright Arthur Miller), the authorities soon settle on poor Arthur Kennedy, a down-on-his-luck war veteran who arrived in town searching for any possible future to hang onto. Unfortunately, he’s in possession of the same sort of gun that killed the priest and, in a too-familiar process, is badgered into a sleepless confession by the cops. But state attorney Dana Andrews, upon visiting Kennedy in jail, has a nagging suspicion that he isn’t the assailant, even though there’s increasing expectations from local businessmen like Ed Begley for the case to be shut. But you know if the always slimy Begley is involved, there’s got to be more to what meets the eye. 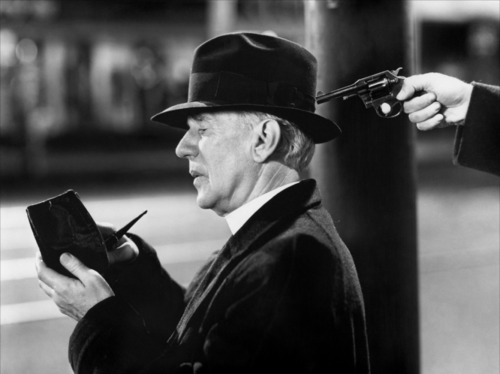 Starkly narrated by Reed Hadley, Boomerang has that delicious quasi-documentary feel to it that reminds us of early Anthony Mann noir films like T-Men and He Walked by Night (Hadley also narrated producer Louis de Rochemont’s 1945 spy yarn The House on 92nd Street). As seen on the new Kino Lorber Blu-Ray, Norbert Brodine’s gorgeous black-and-white photography sometimes looks as though it was shot yesterday, with his stark overhead lighting often feeling like work years ahead of its time. As with many Kazan works, the film is packed with scads of recognizable character actors like Sam Levene, Cara Williams and Jane Wyatt (who plays Andrews’ socialite wife). Making it seem even more authentic is Kazan’s assured decision to film the tale in Connecticut proper, on location and without the stultifying sense we’re actually in Los Angeles-built studio sets. But, in the end, it’s Richard Murphy’s barreling, Oscar-nominated screenplay that provides this twisty movie with its unerring drive. 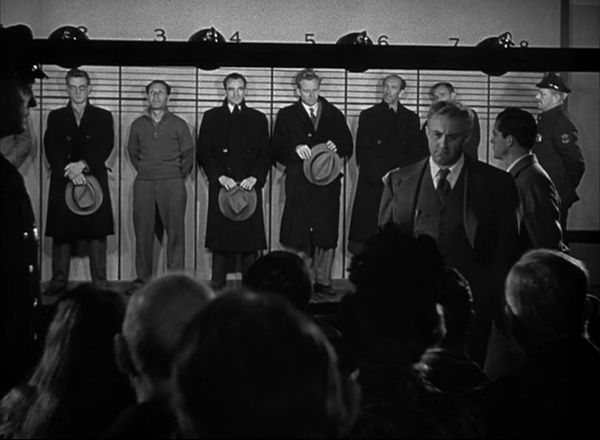 Anchored by Andrews’ heroic attorney, who seems sickened yet almost seduced by whispers of a governor’s position should he settle this case, Boomerang is further deepened by Kennedy’s saddened portrayal of a man who’s disconnection to the world—brought about by a wartime experience that’s seemingly left him without reachable goals (again, some things never change)–has abandoned him to a possible life behind bars. His is a notably skittish performance in a movie that’s been unjustly forgotten in discussions about the noir genre’s most jolting entries. This new Blu-Ray should go far in righting this wrong.