A perpetual adolescent tries to drop out of adulthood entirely 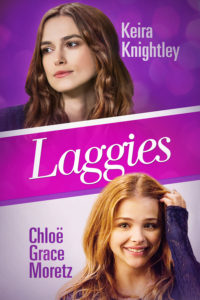 Keira Knightley has done her share of costume dramas, but I have always preferred her as I first saw her, in Bend It Like Beckham – lanky, loose, unfussy, funny. It’s that Knightly that appears in Laggies, a movie about Megan, a woman-child who can’t seem to find her way into adulthood. Laggies is directed by Lynn Shelton, whose Your Sister’s Sister was a favorite find earlier in this project. I suspect Shelton, a Mumblecore veteran, wanted Laggies to share the same naturalistic, laid back vibe. Here, however, and despite Knightley’s amiable performance, it doesn’t quite work.

Maybe its the supporting characters; in particular, Megan’s “group” – the boyfriend and friends she’s had since high school. Her female friends are so shrill, tedious and judgmental that it’s difficult to believe there was ever a deep bond between Meagan and these social climbers. The boyfriend, Anthony (Mark Webber), is bland and low key. There is zero chemistry in this relationship, and thus, zero suspense as to whether Megan will stay with Anthony.

Or maybe the chief problem with Laggies is not those characters but the premise. Panicked by a marriage proposal, Megan tells her boyfriend that she’s going to a week long motivational seminar. Instead, she ends up crashing with a teenager who she just met (Chloë Grace Moretz). How did they meet? After fleeing from her boyfriend’s very public proposal (at a friend’s wedding reception), Megan runs into a group of teens looking for an adult who will buy them alcohol. Someone once did this for Megan, and so she decides to pay it forward and loads these kids up with a variety of potables. I had trouble getting past that plot point.

It’s criminal behavior, providing alcohol to minors, even if it happens all the time (as I know it does). There are serious potential consequences, including teens driving drunk – a possibility that will be more than theoretical before Laggies is over.

The movie, however, treats this transgression lightly; as a minor lapse in judgement born of a generous spirit. In any case, this misdeed is the beginning of a beautiful friendship between Megan, in her mid-20s, and high schooler Annika (Moretz). Soon Annika is sneaking Megan into her room, but the intruder is quickly discovered by Annika’s dad, Craig (Sam Rockwell), a distracted single parent and divorce lawyer.

It’s easy to guess where things are going, but still hard to believe them: hard to believe how quickly Annika and her friends accepts a down-on-her-luck adult as part of their inner circle, hard to believe that Craig is so ready to trust a grown woman who sneaked into his house. And then there are the rom-com clichés that seem to pile up as the movie heads toward it’s inevitable happy ending. All of this happens, and yet it doesn’t feel like much is happening. The movie drifts along, generally inoffensively (if only you can look past how Megan and Annika became friends), but inconsequentially. Laggies had a bigger name cast and a bigger budget than Shelton’s earlier movies, but it’s far from her best work. 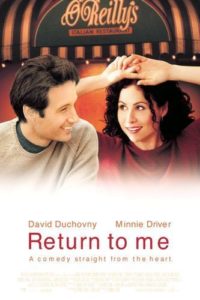 I’m a hard sell when it comes to romantic comedies, but this one got me. I has a ridiculous high concept premise – man unwittingly falls in love with the recipient of his dead wife’s heart – but the cast is so very likeable and the whole thing is light on its feet, with a witty script (co-written by Hunt, Andrew Stern and Hunt’s longtime collaborator Don Lake). To be clear: I adore Bonnie Hunt both behind and in front of the camera, and enjoy her supporting role inReturn to Me. But the rest of the cast is fun to watch, too. David Duchovny and Minnie Driver are the leads, with support from (among others) Carroll O’Connor and Robert Loggia