TIME OUT OF MIND – Film Review 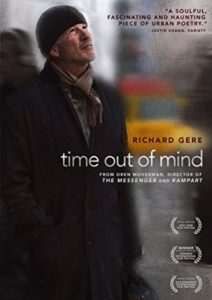 For Richard Gere, his latest role as homeless man George, who wanders the streets of New York, became a personal invitation to become the change he wanted to see.  Going undercover for his role in director Oren Moverman’s latest film, Time out of Mind, helped Gere to realize the struggle that many homeless people have.  Not a struggle to get spare change, or a meal, though those are challenges every day.  The struggle he experienced and saw was just simply “being seen” by those who walk right past, not wanting to acknowledge the person they pass as human.

Richard Gere transforms himself into a role of a man who is no longer seeking to find success, but who is willing to throw away the relationship he has with his daughter Maggie (Jena Malone), and any chance at a home for the opportunity to have another drink.

Wandering the streets at night, he eventually gets swept up into the intense bureaucratic machine of the city shelter system, and the social security administration that forces him into a men’s shelter one night where he must jump through all kinds of legal hoops to simply prove that he is who he says he is for the purpose of earning his social security checks and ultimately getting back on his feet.

Director Oren Moverman chooses to put the audience’s vantage point far from the scene throughout the film.  Instead, the viewer becomes the voyeur watching the homeless man from afar, but not so close that it makes you have to engage with the person on screen. Many times the camera appears to be watching from across the street. This creates an unsettling effect as you watch the film from an accusatory vantage point doing to a film and its characters what so many do to the homeless across our nation.

Gere is still a charismatic presence on screen, but this is a raw, gritty script that allows him to finally get his hands dirty a bit and take on a role that pits him completely against type.  Jena Malone holds her own as Gere’s estranged bartender daughter capturing the frustration of a daughter who no longer can stand idly by as her parent knowingly self-destructs.

The true standout in this film, besides Gere, is a fellow resident at the men’s shelter named Dixon, who is played wonderfully by Ben Vereen.  He gives his character a vulnerability that balances precariously on the edge of reason and mental instability without lessing or belittling the very real struggle that happens daily with many homeless individuals struggling with mental illness.  The fact is that everything about this project feels authentic. Kyra Sedgwick and Steve Buscemi, add to the film as well, despite having just very minor roles.

In Time out of Mind, both Dixon and George are former musicians, and while they wax poetic about their former lives of playing music and chasing women, the reality is that they are simply  reveling in their glory years.  Not one of them is able to play a note on a piano that they are sitting at in the sandwich shop whose owner has let them use his restrooms and even given them some free food.  It isn’t because they physically can’t, but the emptiness they are living with keeps them from trying to make the music they were once capable of.  In many ways, this becomes the metaphor for how they still remain stuck despite having the means to move forward. 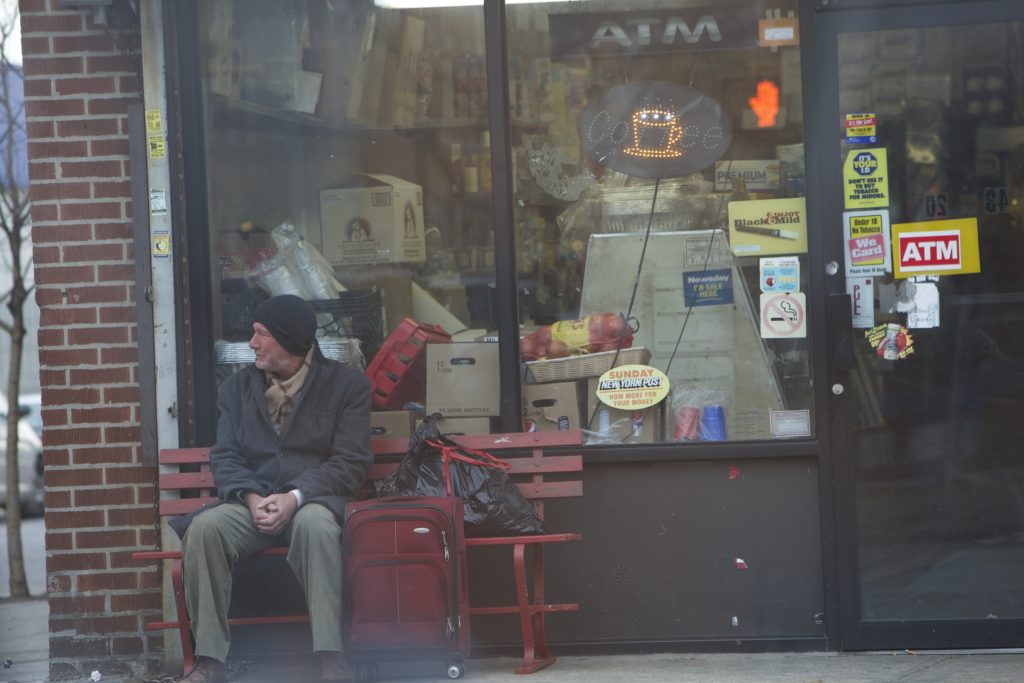 Many will be fascinated by this film, but just as many will find it a difficult viewing experience as the story is lacking any real plot save Gere’s wandering the streets and continually fouling up he and his fictional daughter’s relationship.  The voyueristic camera vantage point only adds to the awkwardness of several scenes, and the government bureaucracy that Gere must navigate only furthers any frustration you might have with the current system.

In the end, it is obvious that this film is a labor of love, even if won’t connect for everybody. Gere should really consider continuing his career in this vein of stretching himself to break out of the same old character he has played the past 30 years and instead embrace the opportunity to reinvent himself, and transform himself through each role .  There is a strong actor underneath his calm demeanor and Time Out of Mind exposes Gere’s abilities in a refreshing way, while, at the same time, highlighting a very widespread epidemic that de-humanizes the millions of people that it touches… homelessness.