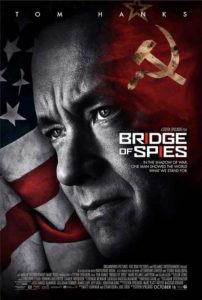 For the man who once made E.T., Close Encounters of the Third Kind, Jurassic Park and is the single most famous, most successful living filmmaker in the world, worse fates can befall the man. Bridge of Spiesmay be a little creaky here and there, a little bit overboard on the nostalgia, and scattershot in the way an old man loses focus in regailing his grandkids with tales of how things used to be. But it’s not a poor piece of work. Yes, there’s a bridge. And yes, there are spies. But mostly, it’s Tom Hanks as an insurance company lawyer working his way to both.

Harkening back to a time when the Soviet Union stood as the predominant threat to the United States, and vice-versa, “Bridge of Spies” seeks to depict the bygone confluence of cultural dread, pending doom, and narrow-viewed patriotism that the era embodied. It was the late 1950s, technically a time of peace. Yet, mutually assured destruction and the arms race of the time defined the Cold War that clutched us – and by extension, the world.

Being a historical drama directed by Steven Spielberg, Bridge of Spies has everything at is disposal that any film might need to take viewers back in time. The cast, led by returning Spielberg favorite Tom Hanks, and also featuring Mark Rylance as the Soviet spy and Alan Alda as Hanks’ boss, is top notch. The period detail, down to the slightest matchbook cover and ashtray, is immaculate. The cinematography – the very feel of the picture – embraces the large, lavish studio aesthetic of the Hollywood films being made in the era Bridge of Spies depicts. That’s not to say that it looks and feels like a film that was made in the 1950s, but rather that its unafraid, even proud, of its largeness and maturity in a way that is unapologetically old fashioned. 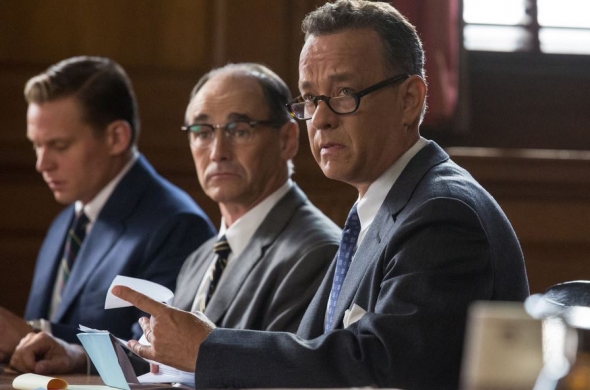 “Old fashioned” isn’t new to Spielberg – he’s had tremendous success embracing aesthetics of yore with his Indiana Jones films and his venerated historical dramas Schindler’s List and Saving Private Ryan (also starring Hanks). But for every one of those mega-successes, there are lesser entries (of varying degrees), such as Munich, Lincoln, Catch Me If You Can, The Color Purple, Empire of the Sun, and the ever-underrated Amistad. And then there are the ones audiences would just as soon forget – Always, and 1941. Bridge of Spies, despite the curiously promising aspect of Spielberg directing a screenplay by the Coen Brothers (and then Matt Charman) set in the world of Cold War espionage, is merely middling Spielberg. (Don’t expect any of the Coen’s trademark stylized dialogue – if it was ever there, it’s been scrubbed out.) This means it’s still a good movie, even if it’s also flat, dusty, and tangential at times. Keep in mind that Steven Spielberg, in the previous film he made, Lincoln, managed to generate genuine suspense from thirty minutes of Civil War era congressional yeas and nays. So exceptionally high cinematic expectations are not out of line, even for the latter-day “historical drama” Spielberg.

All of that said, Bridge of Spies still, in some ways, feels like a movie for school children that’s posing as smarter, more sophisticated fare. Everything is so spelled out and so boiled down, as no point can be risked to go over anyone’s head. In making this film now, Spielberg is pretty clearly looking to comment on America’s view of our current percieved enemies, and how our national actions and pronouncements can degrade us on a global level. 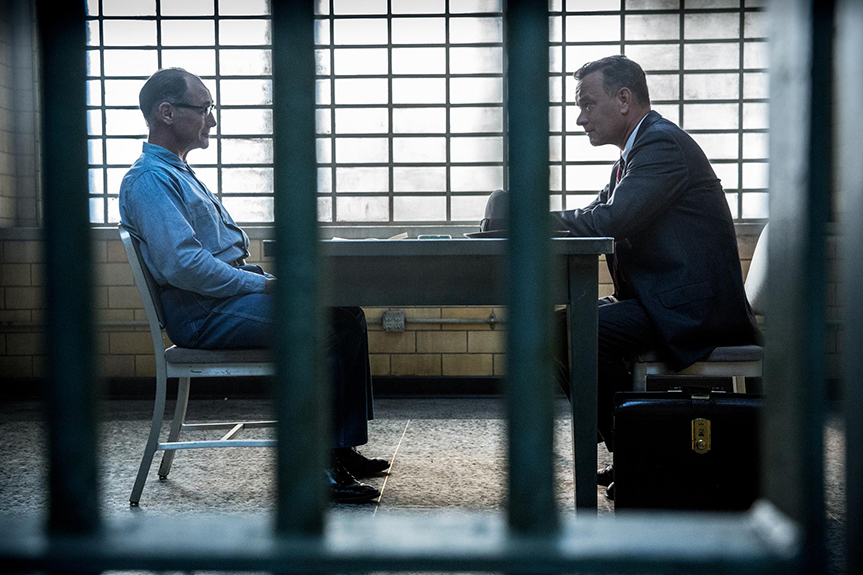 Mark Rylance, Tom Hanks, and symbolism in BRIDGE OF SPIES.

It’s all a bit trite and speechy at times, the talk of “That’s not who we really are!” and “Let’s show them what America really stands for!” Yet it’s not Barack Obama that Spielberg is interested in kicking in chins with that talk, it’s still George W. Bush – now seven years gone from his post. Nevermind who deserves it and who doesn’t, Bridge of Spies lays it on awfully thick for a film that’s more subtextually caught up in the early 2000s than it is the Cold War.  Neither era is known for it subtly, but still…

Hence, the Soviet spy is so genteel, so nice in his workaday trousers and bags under his eyes, of course he and Hanks will form the great bond of the story. The spy is even a painter, for crying out loud. The American spies, by contrast, are a roomful of crew-cut chisled youth, one of whom suffers the film’s only action sequence, the attack on the U2 spy plane. Both spies are captured by the other sides, and it’s up to Hanks to orchestrate their safe exchange. To make things more interesting, Hanks get a bit ambitious in his bargaining – a key aspect to both the true-life story and the film’s own effective audience engagement.

In the end, Bridge of Spies doesn’t cross over into any new territory. If there’s anything at all refreshing about it, it might be in just how unaffaid it is to be a little patriotic in the end, a little moralizing – both so very uncool these days. But, when you’ve grown old, being cool is for kids.