A Samurai out of time lives again!  It’s Actually not that Exciting.

When an unfrozen centuries-dead Japanese Samurai warrior kills a labs tech and escapes the L.A. facility that revived him, maybe it’s time to question whether leaving him unattended with his swords and armor was a good idea.  Then again, based on the way things go south so quickly in the 1986 low-budget adventure-drama Ghost Warrior (aka “Swordkill”), it’s fair to assume that maybe security was just that lax and they really were that understaffed at top secret medical buildings back in the day.  But then again again, this is a movie about an unfrozen centuries-dead Japanese samurai warrior arriving in modern day on an altogether different side of the globe.  How much logic and accuracy should we expect??

With the premise now established (“Captain America as a noble but lethal samurai from feudal Japan awakened to a not-so-brave new world of toasters, light switches, helicopters, and television”, in case you missed it), it should also be established that despite this being a Charles Band production (he of Full Moon Features, ‘nuff said), Ghost Warrior is a shockingly self-serious work that looks and feels like an actual movie (as opposed to, say, the Attack of the 50-Foot Camgirl or Evil Bong 666).  Low budget, but actual.  The titular man out of time story had thawed to room temperature even back when this was made, so it’s fair to say that the altogether lack of fun in J. Larry Carroll’s dopey sounding little yarn might be the biggest surprise the eighty-one-minute slog has to offer.

An almost shockingly somber and self-serious, Ghost Warrior’s brief eighty-one-minute running time still manages to feel decompressed.  For an ostensible action movie, its pace can’t live up to its stated urgencies.  In other words, it drags.  An incredibly stoic and Mifune-esque Hiroshi Fujioka (High Seas Hijack; In the Line of Duty III) plays Yoshi the samurai, who quickly finds himself hunted by the very institute that revived him.  The logic as to why the head of the institute wants him dead makes about as much sense to us as it does to Yoshi, but the actors never flinch.  Also especially good with the material she has to work with is Janet Julian as the young Japanese culture expert (who, er, doesn’t actually speak Japanese) brought in to consult on the situation.  Once the hunt is on, she turns out to be his only ally, and our only expository resource for explaining how the samurai is thinking, feeling, and will react.  Somehow, she sells it.

Action film historians Brandon Bentley and Mike Leeder are here for an audio commentary about this film, though one of the two (I’ll spare the guilty party here) is heard via secondhand audio, with an electronic echo to boot.  It’s a glaring and continuous annoyance marring an otherwise outstanding commentary track.  I do hope that Bentley and Leeder will be offering up more commentaries in the future, with the technical t’s crossed.

KL Studio Classics also includes a newly recorded video interview with special makeup effects artist, Robert Short.  Short’s career has been vast and successful (including an Oscar win for his practical effects work on Beetlejuice), with this project representing his inglorious beginnings.  (Although that goes double for the little-known 1987 sci-fi mess Programmed to Kill, also out on Blu-ray the same day from KLSC, and also containing a bonus interview with Short).  Short is enthusiastic to talk Ghost Warrior, describing the humble sword-strike gags he came up with. It’s an interesting get for KL to land someone like Short, who worked on the film in a below-the line capacity, to reflect on a project like this.

Having been released to Blu-ray numerous times previously and with no indication of a fresh transfer, the new bonus features appear to be the only reason to get this version rather than any of the others.  That, and the slipcover packaging, which matters greatly to some collectors.  (There’s also the film’s trailer and optional English subtitles).  The movie itself is okay at best, fitting the bill for a decent low-expectations watch that proves not great but doesn’t grate.  For whatever it’s worth, the lab tech that Yoshi kills was trying to steal his priceless swords.  It’s Yoshi, though, who’s spent his whole life fixated on his own moment of death.  With that revoked by modern medical mumbo-jumbo (the operating room has blue laser lights!), all he can do is venture forth as he knows how.  So too does Ghost Warrior/Swordkill– only to die on Blu-ray over and over again. 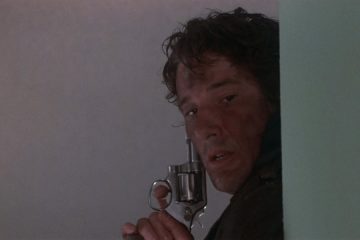