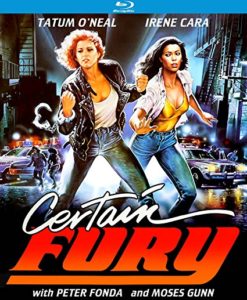 I envision a midrange sixteen foot rental truck filled front to back and top to bottom with trash. This would be the Set Dressing truck for the making of Certain Fury, a mid-1980s urban actioner that interprets “urban” as “looks like a bomb went off”. At no point do our pair of smudged and filthy girls on the run find themselves in an environment lacking in grime, old boxes, scraps of paper, and general disheveledness. I suppose that’s the charm of whatever city this is supposed to be.

Actually, the real selling point for Certain Fury lies in its heretofore unavailability following the VHS heyday of which it was a part of. (Thank you, New World Pictures!). With ’80s chic in ironic vogue, Kino Lorber has struck while the iron is as hot as it’s ever going to get for a movie like this, and resurrected it to Blu-Ray.

For anyone looking for an 80’s action movie nostalgia fix, KL’s Certain Fury is certain fun.

One look at the gloriously retro cover art tells you everything you need to know: Tatum O’Neal and Irene Cara are in deep doodoo; on the run in R-rated Reagan era exploitation “buddy movie” fashion. They’re not buddies, and in fact spend the film sniping at each other and calling one another “bitch”. But together they stay. For the most part. 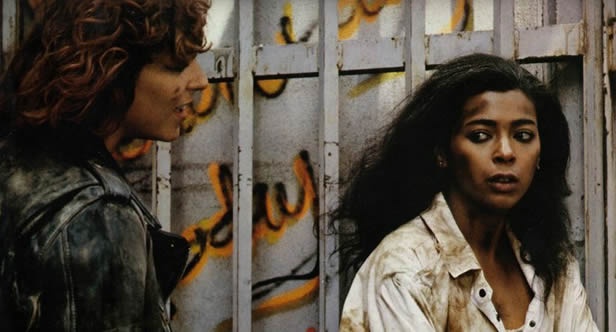 Having survived a bloody courtroom shootout between two fellow female prisoners and whatever police happened to be there, they find themselves mistaken for the attakers. Unfortunately, the racial profile of the killers, a combination of one white woman/one black woman, also applies to them. Hence the misunderstanding. Their busting loose at the first opportunity also doesn’t exactly help their case, but O’Neal’s streetwise character, facing a boatload of charges, has her reasons.

Determining which of the very contrasting lead performances is the greater standout is more of a toss-up than one might guess. Irene Cara, best known as a singer of hit songs from Flashdance and Fame, delivers the more grounded, yet braver performance. “Braver” meaning what it usually means in these terms – Specifically, she has an attempted shower rape/fight scene, realized in mostly concealing angles, but revealing nonetheless. 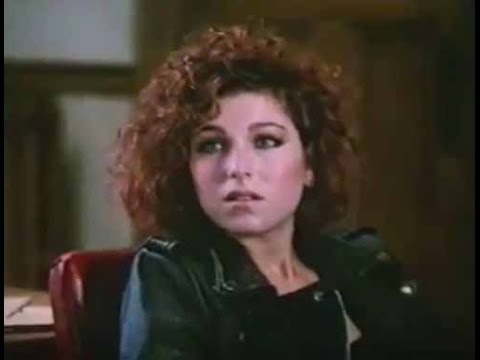 Best Supporting Actress Academy Award winner (famously at age ten for 1974’s Paper Moon), on the other hand, gives an offbeat performance that one would not ordinarily expect from an Oscar winner. There’s a heightened oddity to what she’s doing in realizing Scarlet, her prostitute character. Is Scarlet mentally ill? Or is she simply “overcooked” from a young lifetime of drugs and abuse? Or is O’Neal just trying to do something different? With all the running around and exploitation movie craziness she is experiencing in Certain Fury, we never do get a clear answer. But despite her distracting quality in the moment, a day later, she remains most distinct. Together, they share a decent chemistry that propels the movie through its own barrage of trash, overpacked squibs, and hit-every-syllable swearing.

Like so many things in the 80s, the title “Certain Fury” is cool, but also dumb. The only example of true “fury” in the film is the courtroom assault, carried out by characters we don’t know and never see again. But, director Stephen Gyllenhaal (more famous now as the father of Maggie and Jake than his long career helming film and television) keeps things moving while never getting too precious about anything. It’s straight-ahead action, occasionally brutal, on a low budget with a synth score to match its cover art. No fancy stuff. Aging actors Moses Gunn and Peter Fonda turn up in “special appearances”. The film even goes an extra step, striking a more serious tone and delivering a little unexpected grace in its contrived depiction of unlikely bonding.

Those who opt to check out Certain Fury on Blu-Ray will not be disappointed. For perhaps the first time ever, it’s presented for home viewing in its theatrical aspect ratio, with an HD remastering to boot. How this first class clean-up will affect this filthy VHS era morsel’s nostalgia factor, I can’t say. But the bonus commentary track by Film Historians Nathaniel Thompson and Tim Greer definitely can’t hurt. It’s lively and info-packed. For anyone looking for an 80’s action movie nostalgia fix, KL’s Certain Fury is certain fun.