Danny Boyle Talks Nostalgia, How Men Deal with Aging, and The Usefulness of Viagra..

Though it may be hard to accept for those who grew up with the film as a cornerstone of their youth, it’s been exactly twenty years since we last visited the characters of Mark Renton (Ewan Mcgregor) Simon AKA “Sick Boy” (Jonny Lee Miller), Spud (Ewen Bremner) and Begbie (Robert Carlyle), from Oscar Winning director Danny Boyle’s second feature film Trainspotting.

The 1996 British film based on Irvine Welsh’s novel which is considered one of the greatest British films of all time, revolves around a group of heroin addicted young-adults trying to disavow themselves from consumerist culture in in economically trialed Leith, Edinburgh at the end of the Margaret Thatcher era. Beloved for it’s depiction of a very specific underground subculture, the film became a cult classic upon release “It came out of a particular spirit of that time.” Boyle tells me. “Well actually, it came out of ‘Rave Culture’ the first film that is. A lot of it is about the heroin epidemic in the book, but also, in Britain at that time it was also MDMA and the energy of ecstasy. Now they’re 46 year old guys and they’re longing for the past, or certainly to relive the effortless bravado of the past. ” 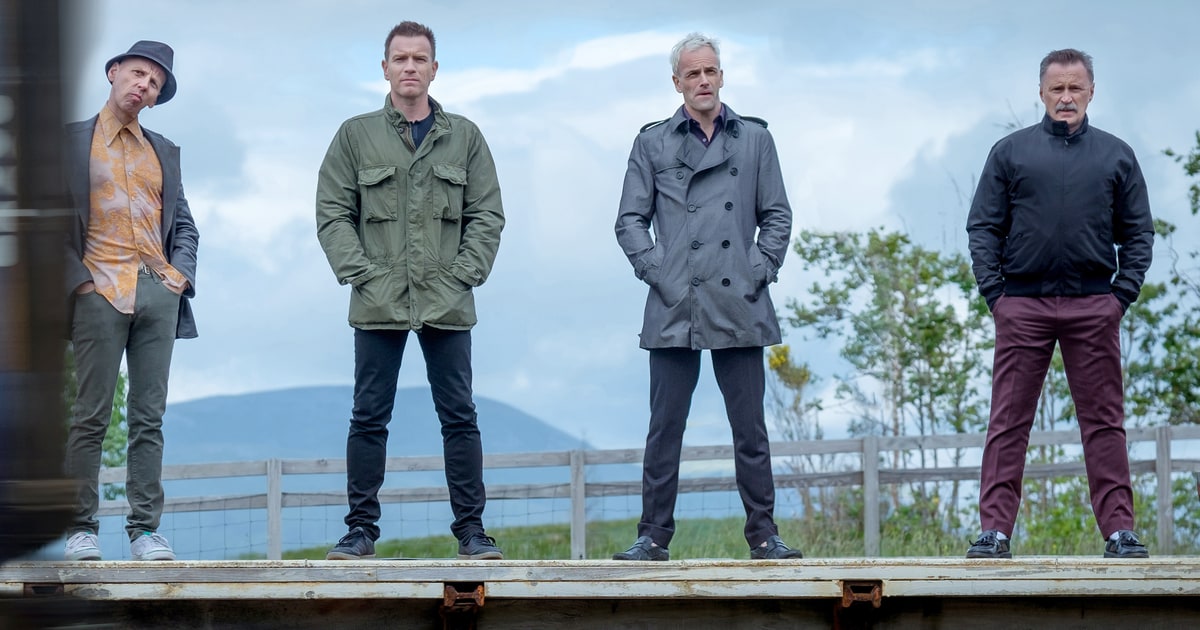 Loosely based on Welsh’s follow up novel Porno, The highly anticipated 2017 sequel, entitled T2 Trainspotting picks up twenty years later following a mid-life crisis, but sober and clean, Renton, as he returns to Scotland to reunite with Spud who continues to battle with his addiction, and also Sickboy who now owns a pub with his Bulgarian lady friend. Meanwhile, the violent, borderline psychopath Begbie is released from a prolonged prison sentence, who to this day, continues to hold a massive grudge over Renton’s “minor” betrayal of fleeing off with the £16,000 they made together in a drug deal. When Sick Boy and Renton get the idea to turn the pub into a “spa”, the duo find themselves in familiar territory scamming and thieving.

Only now the choose life monologue has been modernized. Renton advises us to choose, Facebook, Twitter, Instagram, Reality TV, slut-shaming and revenge porn. It’s all been updated to match our current sociopolitical climate. So what does the film have to say about Brexit, the the rise of Trump or the same widening income inequality that afflicted the middle-class characters in the first film and continues to worsen to this day both in the U.S. and U.K.? Unfortunately, nothing. It’s a film about nostalgia first and foremost, or as Sick Boy so solemnly puts it being “a tourist in your own youth.”

Boyle elaborated, “ What’s the film going to mean for someone in their late teens or early 20’s?…I have absolutely no idea. All I can tell you is men remain the same for far too long. I wasn’t really aware of it when we were starting it, but it felt like it was a look at masculinity. Every scene I watched, it was all about how men behave and how they hang on to this golden period.” He went on, “And they would absolutely deny that. Ya know, ‘I’m not living in the past! Don’t accuse me of that! Don’t accuse me of nostalgia!’ But it is the golden period of the 20’s when as a man you emerge into power. You know, you kinda had a childhood where everyone shat on you. And now suddenly, it’s you who gets to shit all over everybody else.” He laughed, “It’s a glorious feeling and men never abandon it I don’t think. They go into their grey and don’t abandon it, whereas I think women measure out time much more sensibly.”

Boyle also touched on the topic of our rising Heroin Epidemic as the CDC reported that in 2015 heroin overdoses resulting in death surpassed gun-related homicide for the first time. “Heroin will always be with us. These fluctuations where society concentrates on it and suddenly declares there were so many more deaths this year…” He paused. “I’m not denying that they’re true, but it’s not like it will ever go away. It’s been with us for time immemorial. It’s power is that it isn’t fashionable. It has a compatibility with human nature and the human body, which is difficult to get rid of. If you ever end up in a hospital you’ll be using it to ease you with physical pain. And people on the streets use it to erases or control emotional or psychological pain.” He humorously added, “But really, the drug of the day is viagra, which it should be because they’re in their forties and Begbie is really struggling with that whole side of himself.”

Given Boyle was only in his late 30’s when he made the first film, he spoke on how T2 had a different creative process go into it as he’s now aged along with these characters. “When we made the first one the actors were very young and inexperienced so we didn’t really know what we were doing, hence some of the boldness of it. Then it can break either way, you can get crushed by that and have it backfire, or you get lucky if something emerges that is coherent or, as it was, thrilling and entertaining.” He went on to discuss the fear of even following through with a sequel. “Initially, you think ‘If this is bad, we’ll get absolutely killed.’ Because obviously when you return to something people really treasure, you know if you fail you’re going to get slaughtered.” He laughed, “The actors, I used to see them looking at me on the set sometimes. I’d see them out the corner of my eye staring at me and I knew they were thinking ‘Oh I hope this isn’t shite, Danny, otherwise we’ll all die a death.’

It wasn’t shite Danny. It was a dignified follow up.