A Compelling Case for Voting Differently With Your Fork Sometimes the timing of events in our lives can seem almost spooky.  Last week I presented a two-part seminar on the place of animals in Christian tradition.  What had started as an interesting historical research project ended in a lot of soul searching and ethical wrangling on my part.  The unforeseen opportunity to view the documentary Eating Animals just days after presenting my seminar seemed too on point, almost providential.  Was I really prepared to have my conscience pricked even more?

I’m glad that pushed through the discomfort (which was, at times, considerable) of watching Eating Animals.  The film is based on a book by Jonathon Safran Foer in which he wrestled with the question of whether to raise his infant son eating meat.  That specific question is left out of the film (for the record, Foer’s son is being raised as a vegan), but the movie carries over the book’s dense examination of eating animals in the industrialized world. 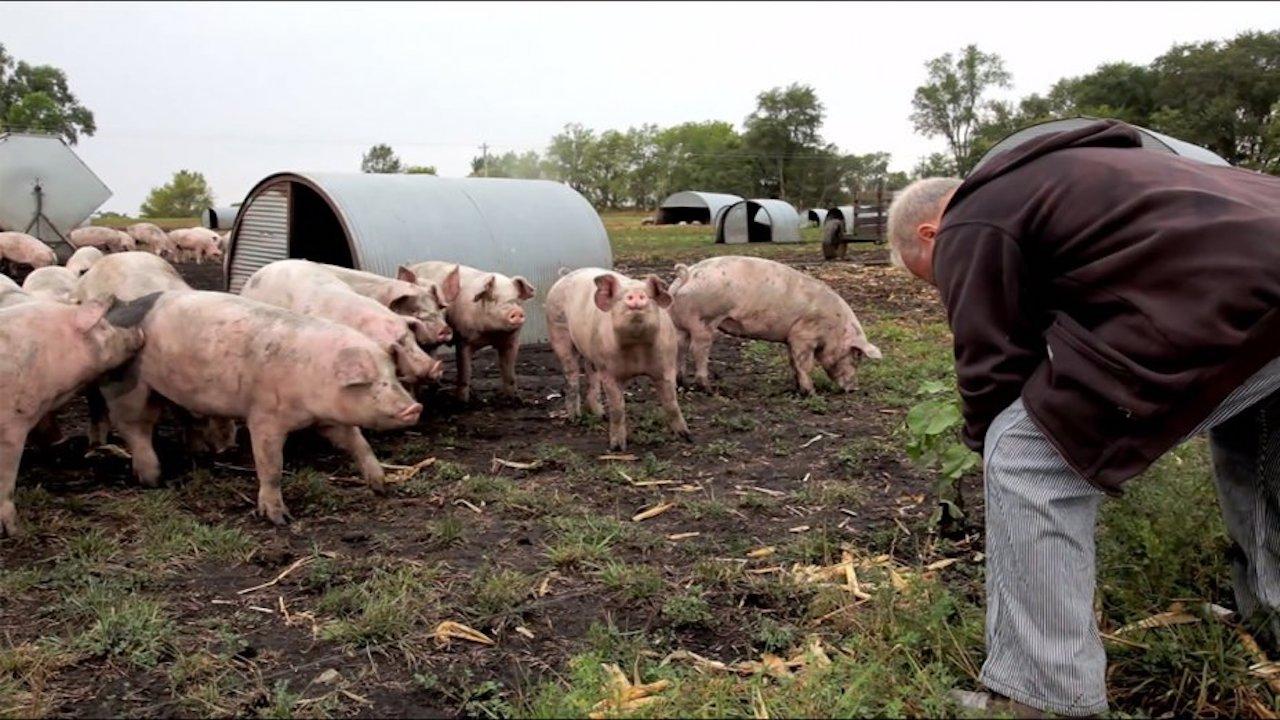 The cost of factory farming is surely not a secret at this point.  There have been myriad books and documentaries affirming what we hear in Eating Animals:  using almost any metric for environmental degradation, industry meat production is one of the top polluters.  It ruins land, poisons water supplies, consumes grain that could feed millions of people, and has led to the rise of antibiotic resistant “superbugs”.  While the environmental damage is on display in Eating Animals – particularly in its focus on the garishly pink “hog lagoons” scattered across North Carolina’s farm country – the movie is even more concerned with farming’s impact on animals.  Perhaps surprisingly, given that Foer is a vegan, Eating Animals devotes much of it’s running time to small farmers raising animals in humane and sustainable ways.  They serve as a contrast to the footage of hogs and chickens jammed by the thousands into confineries.  The animals of factory farming have been genetically manipulated, tortured, confined, and killed with merciless efficiency not because of anyone’s intentional cruelty, but because they are are seen as objects, and not as our fellow creatures.  “All objectification is forgetting”, and we have forgotten our connection with the animals who feed us.  In the research for my seminar I came across this quote from the English philosopher Jeremy Bentham regarding animals:  “The question is not ‘can they reason?’ nor ‘can they talk?’ – but can they suffer?”  The footage of animals on factory farms in Eating Animals will leave no doubt as to the answer to Bentham’s question.  It forces us to confront another question:  not “can we acknowledge that animals suffer to feed us?”, but “do we care?”  Will we let our awareness of animal suffering shape the way we “vote with our forks”? As I said, the film presents another picture of farming, as well.  The film’s foremost character is a poultry farmer, Frank Reese.  Reese says he loves his birds, and he convinced me.  He takes pride in preserving lines of chickens that have almost gone out of existence, praises the intelligence and sociability of his turkeys, and grieves when the time to send them to the slaughterhouse comes.  It’s a paradox, perhaps, that he can care so deeply for his livestock and still see them as food – but there is no flippancy in his discussion of wielding the power of life and death over the creatures he has raised.  I found myself rooting for him, hoping that his quest to mentor another generation of poultry farmers will succeed.

There is much that is awful, distressing, and hard to watch in Eating Animals.  But director Christopher Quinn (God Grew Tired of Us) has also imbued the film with much beauty and tenderness.  The narration by Natalie Portman has a dreamlike quality.  The photography reminds us that all is not lost; that there are still tall grass fields, and rolling hills, and animals taking pleasure in their creaturely lives.  The alternative voices – of not just Reese but others who are practicing sustainable farming and calling big agriculture to account – give me hope.  99% of the meat we eat comes from factory farming.  The labor and vision that produces the 1% may seem like nothing, like a drop in the bucket.  But Eating Animals convinced me that I can’t take part in the 99% any longer.