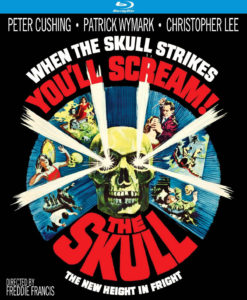 The thing about The Skull is nothing happens. I mean, there’s a skull, and some people who want the skull, and there’s some back story on why some people might want the skull, and then some stuff on what terrible things happen when you actually get the skull. But really, the movie’s a bunch of scenes of people talking about the skull and then a bunch of loving shots of the skull itself, all punctuated with some lingering tracking shots of Peter Cushing reading. Oh, and he also almost goes completely nuts ’cause the skull is the skull of the actual Marquis de Sade and is being imbued in real time with the witch power of his demented followers. Even the loquacious talking heads on the bonus interviews admit that this is a near-painfully thin plot.

But here’s the other thing about The Skull, and this is also backed up on the copious extras: it’s actually good. It’s got a head start, so to speak, by starring British power couple Peter Cushing and Christopher Lee. There’s never been a movie with either one that didn’t get riveting just from their shapes inhabiting the frame – they have genuine horror charisma – so putting them together is never numb-skulled, as casting ideas go, a theory proved by the five or so Hammer movies they’d already helped make international hits. However they switch up the plots or personas, watching skeletal man-of-learning Cushing lock his laser-blue eyes with rigid man-of-secrets Lee, you get the closest thing ’60s horror had to an onscreen mutual man-crush.

It also helps that it’s an Amicus movie. Amicus was launched by the guy who sold Hammer his idea for The Curse of Frankenstein back in ’57 (the first Cushing-Lee joint), and promptly shut him out of the project – nothing better than bitter spite to drive success. But The Skull was the company’s first full-length horror story, and it shows the wobbly signs of not knowing how to expand something small (the original short story was written by Robert Bloch, the writer of the novel Psycho) into something big. Enter cinematographer-turned-director, Freddie Francis, already accomplished in the genre, who wrestled the underdeveloped story into fighting shape – lightweight division – designing some colorful padding to stretch it into its whopping 83-minute running time, just long enough so you don’t think you just watched a Kolchak episode.

Then a funny thing happened, the padding actually bolstered the creep factor – all those long, slow tracking shots wind up servicing the haunted premise quite well. The final product should be a non-starter in the master plan to best Hammer, but its bone-thin premise takes on the muscles and sinews of something like a meditative psychological thriller, if such a thing can exist that features a plastic cranium floating by visible wires. Something deep inside the music and art direction of Cushing’s skull-incited nightmare at the film’s midpoint, wherein he’s picked up by strange agents and walked into a censor-approved phantasmagoric torture zone, is like an accidental cross between the Hitchcock/Dali Spellbound dream sequence and the deeply Freudian mansion-scape of Eyes Wide Shut, all filtered through an as-Hammery-as-Hammer-would-do mélange of splashy color and angles. Round it out with some serious-tilting acting and a few clever editorial transitions and you’ve got yourself an above-par chamber piece. Ultimately, there might be nothing between The Skull‘s ears, but at least its personality is more than skin deep.