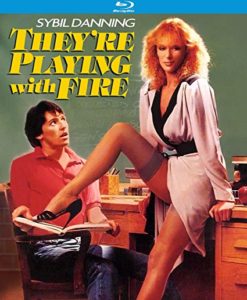 Terrible things are afoot in the whitest yuppie ‘burb in 1984 America.

But, before all the murders, the only shoe store in town ran a really, really great sale on white Nike shoes. This is the only explanation as to why everyone, and I mean everyone, in They’re Playing with Fire wears the exact same style of sneakers. White Nikes with a dark blue swoosh. Everyone. That is, at least they all do once the killer’s feet is seen in close-up wearing these shoes as he executes old ladies. Was this coordinated by the residents of town, or just a crazy coincidence?

This is just one of many, many questions left unanswered by this ridiculous VHS-era embarrassment. The biggest question of all may be, why on Earth is this movie on Blu-Ray? I assume I’m not the only film buff who came of age in the 1980s, and still hadn’t ever heard of this title. One can only figure that the 1980’s appetite for cheap pseudo sexy schlock knew no bounds.

With the right crowd, this could be the mother of all unintentional “good bad movies” of its time. Outside of that very specific set of circumstances, They’re Playing with Fire remains a facepalmer of a movie. Easily mistakable for a feature length student film, obviously filmed in whatever locations they could get, the plot is a shambles and the performances range from acceptable to horrendous. Only veteran actor Andrew Prine, playing a conniving husband, comes out looking okay. 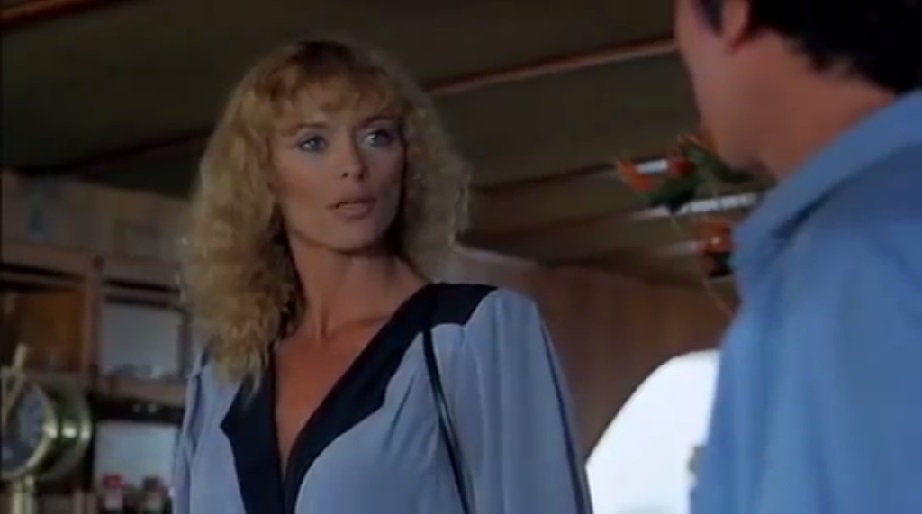 Today, it’s safe to assume that no one will be approaching They’re Playing with Fire as a film of quality. This was most certainly the case in 1984 as well. Yet, there’s a glaring, misplaced seriousness about the movie, despite its clumsy contrivances, random oddities and low-budget restrictions.

To give an idea how scattershot this film is, I’ll just randomly throw out some choice details:

First and foremost, this is an apparent vehicle for-then reigning B-movie queen Sybil Danning. Still occasionally turning up in the odd Rob Zombie picture, Danning currently boasts eighty-one movies and TV appearances on her acting filmography. None of them are particularly good, most them downright wretched, and almost all are forgotten in the mom & pop video rental store graveyard. They’re Playing with Fire very well could have stayed there, and the world would be no less worse of a place. But, here it is!

Danning plays what her IMDb mini bio describes as “a cunning femme fatale English professor”. She is a seductress as cunning as she is obvious. The actual lead is a young fella named Eric Brown. Seemingly locked in some kind of permanent adolescence, Brown is not only unable to carry the film, he can’t even begin the pick it up.

His character, one of Danning’s students, is supposed to have the uncontrollable hots for her. The big dumb gawking grin that he sports is just one of the amped up emotional cues he performs in this role he’s treating like a feature length demo reel. So schizophrenic is his range that he’s hitting every conceivable beat as hard as possible, and shifting on a dime. (A dime, incidentally, being the probable budget of this wild turkey.) (Wild Turkey, or whatever drink of your choice, is highly recommended when viewing!) 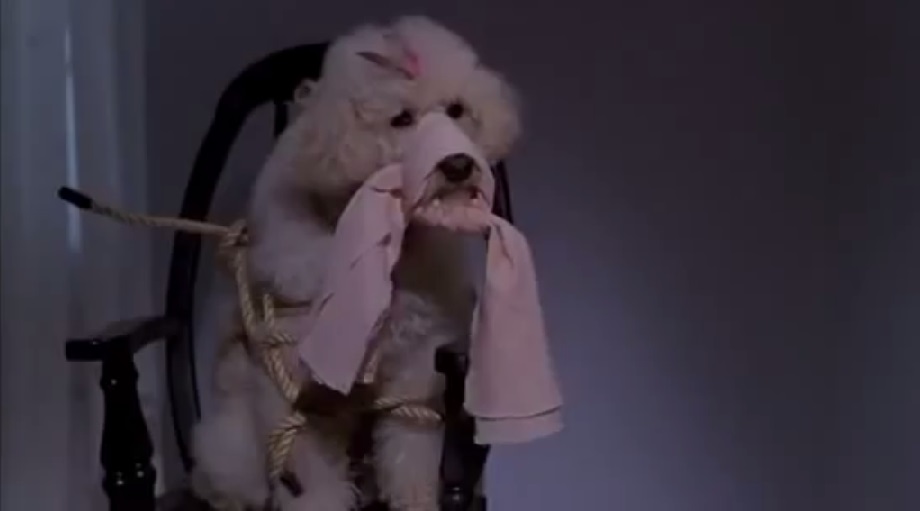 She immediately seduces him after school, what with her glamorous yacht that never leaves the marina and her gold bikini. Their extra curricular activities include ship room sex, breaking and entering, flirting at the gas station, kitchen counter sex, arguing about who’s fault it is that the scheme is failing, sex in his laughable dorm room, and finally squaring off with the ski masked murderer. (Spoiler alert, it’s not her. Nor anyone else that would make a lick of sense.)

The many moods of Eric Brown aren’t the only jarringly shifting aspects of They’re Playing with Fire. The film itself shifts from a noir set up into a Gordian whodunnit before finally settling on a slasher movie, all the while stopping for awkwardly unsexy sexual interludes. For good measure, there’s a pack of comedy relief teenagers who keep snagging lens time, one of whom fancies himself the new John Belushi.

Likewise, it boasts a custom, terminally 1984 title theme song that abruptly switches tempo multiple times. The filmmakers were so proud of this get that they drop the needle on it at least four times throughout. 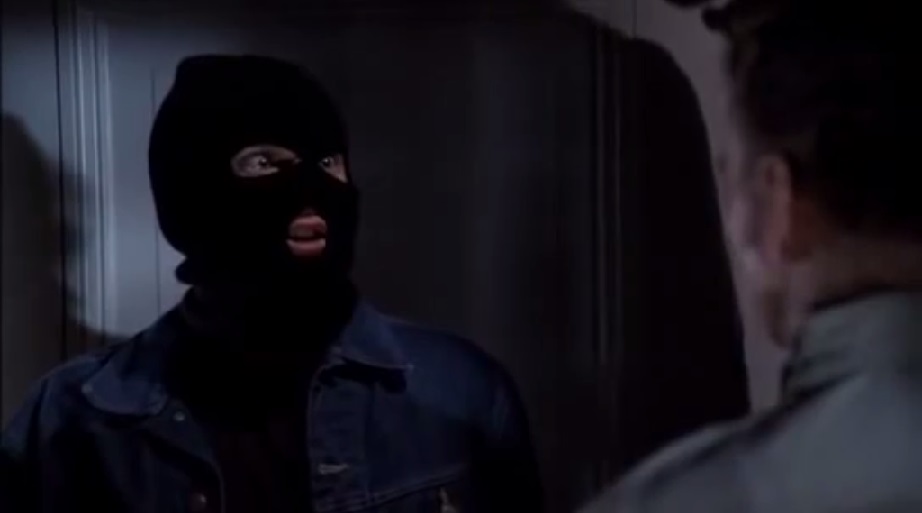 Who is the wild-eyed psycho killer? And, who cares?

Sybil Danning sat for a recent on-camera interview for this release. At sixty-five, it’s curiously odd that she looks younger (and strangely avant-garde) today than she does in the movie. Her recollections come off as kind of narcissistic, brimming with accounts of her own foresight and fan acclaim. (Along the lines of, “To this day, men come up to me and tell me how much they loved watching me in their adolescent years. It’s great to have played such an appreciated part in their lives!”). She calls Brown the only cold fish she ever had the unfortunate task of faking hot times with.

I suppose They’re Playing with Fire looks as good as it ever has, as it was probably mostly viewed thirty-plus years ago on cable and pan & scan video cassettes. But it is hard to polish a turd. The lighting is so flat and glaring throughout, that image-wise, there’s likely never been much to work with, or look at.

Unless a frequently disrobing Danning, complete with obvious augmentation, a terminally ’80s wardrobe and tanning bed skin is your thing, the film has no heat, much less actual fire. In a month brimming with several other dubious film that Kino Lorber is releasing from this time period – Certain Fury, The Bitch, The Stud – this one ranks at the bottom of the vintage rack.