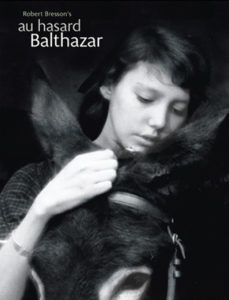 It’s a movie that’s revered, even among Robert Bresson’s other films, as a testament to holiness, a provocative confection of symbolism and compassion that breaks down the wall between film and spirit – self-evidently a universal film, yet it’s not for everyone. “It’s the world in an hour and a half,” praises countryman Jean Luc Godard, while Ingmar Bergman, world cinema’s patron saint of tortured religious grappling, calls it “so completely boring.” The film is certainly slow, quiet, oblique, mannered, and, some would say, pretentious. To many, there will be a strong pull to fast-forward, to nap, or to turn it off outright. Why watch the life story of a donkey? What can be learned from ninety-five minutes of watching a poor beast of burden get passed from cruel master to cruel master, with only brief respites of random love from its original and only true master?

For others, there will be a different reaction. As the scenes of undeserved punishment play, one after the other, interspersed as they are with scenes of people living their lives of unending personal sorrow, they will absorb Bresson’s postured meanings, seeing themselves in these broken lives, and feeling the constant presence of a steadfast mediator and sacrifice in the gentle longsuffering of the animal. Film is a medium of individual interpretation, and if Au Hasard Balthazar is anything, it’s a film that lives or dies on what the viewer brings to it. 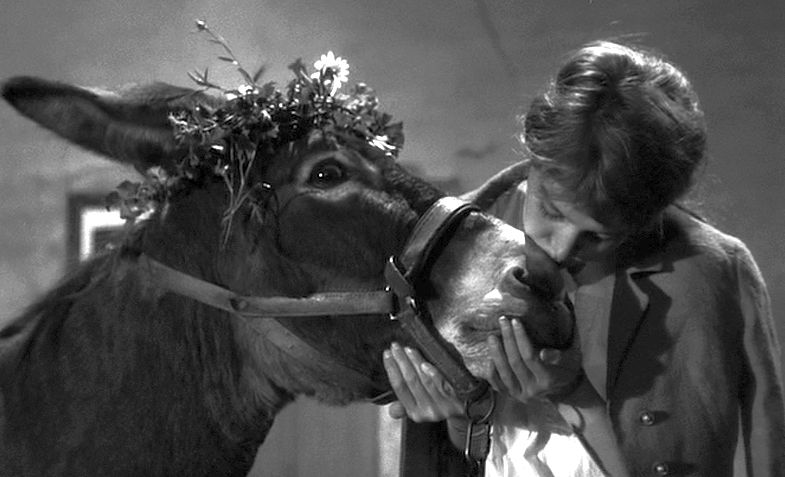 Balthazar‘s opening credits feature music interrupted at intervals by the shrill braying of a donkey. Against the austere black and white, along with the expectations we have for a Bresson movie in general, or a dramatic, mid-century foreign film at all, the hee-haw on the soundtrack almost makes us think it may be a comedy. While it’s steadfastly not a comedy, Bresson goes for a classic film joke in the first scenes: two children pet a young donkey begging their father to let them keep it, he insists that it’s impossible and to forget it… Cut to, the father following the children home with the donkey in tow. It happens again at the end like a comically rhyming bookend. But no, this is not a comedy, and the moments are better labeled Bresson’s muttered asides. Perhaps to say that to take on the troubles of a dumb animal is not impossible, but inevitable.

The rest of the movie, watching Balthazar grow, is famously rolled out like Christ’s stations of the cross, as he is stolen, bought, traded, and swapped time and again, and by owners who alternately whip him, beat him, shoot him, and abandon him. As Christ imagery, it may be somewhat on the nose, but the insistent mood of church-like quiet and reverence subverts the pretense of sermon as simply the natural way of things. And it’s all undergirded with that Bressonian directorial mandate upon all his actors to move slowly, react thoughtfully, pause non-commitally, and whatever you do, don’t express anything with your face.

Bresson is notorious for his aggressive push to maintain this level of opaque, rigid storytelling, and it serves his themes well. Life is almost a pre-ordained series of choices and deeds, bereft of free will, yet unpredictable (the title’s translation is literally Balthazar, At Random), and our existence is a well-preserved butterfly carcass to pin to a board for observation. Like other filmmakers as disperse as Ozu and Wes Anderson, this non-emotive version of revealing emotion is Reason One for those who forsake it quickly, but it is the very source of meaning for many who stick with it. There’s something meditative and true ever lurking under the placid conformity of expressions in any of these filmmakers’ movies. By the end of Au Hasard Balthazar, our journey with the ever-watching beast and its predictable end meets the predictability of basic nature in the hearts of the humans that surround it, until the two become the same story of death, suffering, and simple, soundless redemption. It may not be for everybody, but this tough, near-transcendental slice of animal life is undoubtedly about everybody. 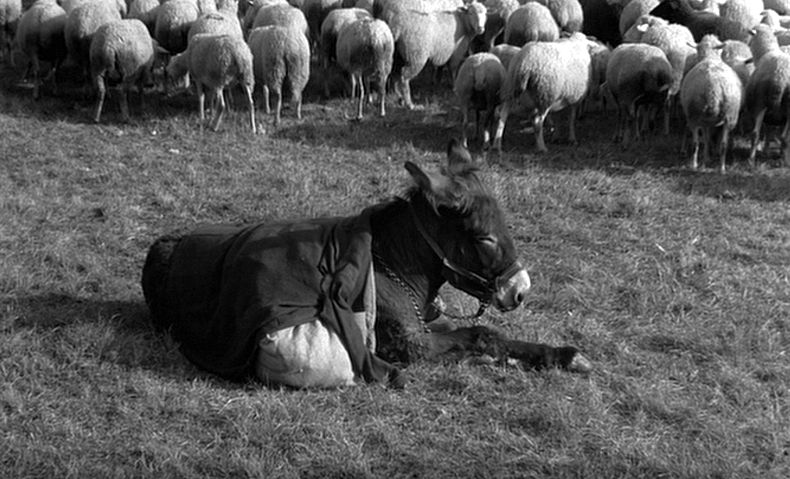