Not the Cliche Movie it Looks Like, But Not Great Either. 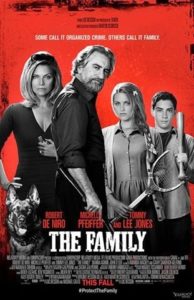 Luc Besson returns to the director’s chair after being known the last few years for writing such films as Taken, and Columbiana.  Better known for directing films such as The Fifth Element, La Femme Nikita, and The Professional, this film will be greeted warmly by fans of his earlier work.  What they will find in The Family is a mixed bag.

Partially being billed in the trailers as a mob-comedy, The Family looks like a paint-by-numbers mafia film on the outside.  The basic premise is that this former mafia family snitched on the head of the organized crime family when they found out that they had been marked for death.  On the run in France, through the witness protection program, they find themselves unable to stay undercover with the temptation to revert to their old habits.  Besson, however, is fortunately never “by the numbers” and is able to provide some fresh ideas in an otherwise middle of the road film.

Casting Robert DeNiro as the patriarch of the family almost cements a type-cast of what style of movie this might turn out to be.  As always, DeNiro seems to thrive in this environment, and this film is no exception.  While more of a dark comedy, DeNiro plays his dark mobster-turned-snitch role pretty straight by the numbers, but playfully gives a wink or two to his celebrated mafia movie past with references to both Al Capone, whom he played in The Untouchables, and also to Martin Scorsese, his long-time collaborator, with a hilarious reference to Goodfellas.  DeNiro’s character, Giovanni Manzoni, seems to be a reluctant mobster at this point in his life, who just can’t quite stop being the man he is.  While there are some plot devices meant to help Giovanni reflect more on who he is at heart, his character arc is very shallow and exhibits very little growth.  He is also very curiously detached from his children, despite the title of the film and the played upon stereotype of Italian family values that is center stage throughout the movie.

Michelle Pfeiffer is always a welcomed presence in any film, but seems underused in this script.  Her character is one of the only ones, however, that is seeking any redemption through the experience of being on the run, with a price on their heads.  There are some tender moments where she is praying in a church for her family and their need for guidance. She desires to convince God that their hearts are in the right place, even if their actions are an affront to everything God stands for.  Here, Besson captures the tension of the religious nature of Italian Catholics that we see in mob movies like this, with the actions they engage in.

Films such as The Godfather, Goodfellas, and the like, show the people of organized crime to be very religious, and yet, their “business” actions stand in stark contrast to their stated religious beliefs.  Michael Corleone had his enemies “whacked” while he attended his nephew’s baptism after all. Baptism is a sacred act for Catholics, but stands in dark contrast with the murders going on in The Godfather Part III.

Here, in The Family, Pfeiffer’s character, Maggie, and her church prayer speaks of the hypocrisy we all share in.  We believe one thing, desire one path, and long for something better, while at the same time participating in decisions and actions that work against the very aims we strive for.  Maggie’s “confession” scene, while very funny when we learn the results, paints a very sad picture, that they may be beyond redemption she prays for. They just can’t stop reverting back to who they used to be.

Tommy Lee Jones plays his usual self.  That is to say that he is a cross between Ed Tom Bell, his sheriff from No Country For Old Men, and Agent Sam Gerard, from The Fugitive and U.S. Marshalls.  Here, sadly, he is not given much to do except look put-out at everyone around him.

Playing the children of the family are Dianna Agron and John D’Leo.  Both do a good job playing the wise, street-smart, New York kids, shaking down the small town where they live outside of Normandy, France.  Despite their New York bonafides in shady dealing and toughness, each is able to convey both a worldliness of someone years beyond their character’s ages, as well as the naiveté that only a child can have as they pursue such grand notions as love, purpose, and finding their own voice in the world.

The Family has a strong cast, and is a good, dark-comedy that keeps from falling into a cliched action-styled comedy that it portrays itself as.  That being said, I think most people that see this film will be expecting DeNiro to be doing his Jack Byrnes comedy schtick from Meet the Parents, albeit in a mob setting, coupled with a few “are you talking to me?” moments ala Taxi Driver.  They will be disappointed when they realize that this is not that kind of film.  That disconnect, as well as the mostly subdued humor throughout the movie, will cause this film to not be well-received after opening weekend.

The Family is very much like the prayer Maggie utters in church.  It seeks to be something great and iconic, yet it can’t shake what it truly is at its core: average.