Sometimes, it’s good to go home again. More to the point, there’s no place like home. (Spoiler alert) But unlike Dorothy, let’s not get carried away… Oh,on second hand, let’s…!

In the rarified niche of decades-old stories written by dead men about children being fantastically whisked away to magical lands, it’s entirely permissible to like “Alice in Wonderland”, “The Lion, The Witch, and the Wardrobe”, and “The Wonderful Wizard of Oz”- but, like the Beatles versus Elvis, you can’t like them equally. There must be a favorite. For me, as long as I can remember,“Oz”has been my own transportive fantasy world of choice. And I’ve only cracked the book a few years ago. As a child (and onward), it has always been the classic 1939 film adaptation that took me over the rainbow.

For one week only, Victor Fleming’s perennial favorite The Wizard of Oz will be enjoying a spruced up theatrical re-release. Like clockwork, the beloved classic is repackaged and represented to the public every five years. Fifteen years ago, when the film turned sixty, we got a re-mastered DVD. Ten years ago, it was a four-disc everything-and-the-kitchen sink DVD boxed set. Five years ago, we sprang for the spectacular, brilliantly restored blu-ray of the film. Now, Warner Brothers takes the occasion of its seventy-fifth anniversary to bring us a newfangled 3D IMAX theatrical re-release.

Despite the amount of effort and care that’s gone into this version, we’re being told that it will only be granted a one-week cinema engagement. So, if you are like me, and have never experienced it in the theater, you’d best be off to see The Wizardsooner than later. It is absolutely worth it. Why Warners went to all that trouble for a one-week outing, I’m not sure, but one thing is certain – The Wizard of Oz belongs on a large screen (if not necessarily in 3D) for all to enjoy. It is the theatrical experience, and not the 3D that is the point of my recommendation. The restoration is indeed glorious, projected so largely that if one were so inclined, could begin to discern the edge of the practical sound stage from its matching backdrop horizon. Likewise, the edges of the Scarecrow’s and the Tin Man’s bald caps have never been so visible. One must embrace the charm in this revealed artifice, as its always been true that everything on screen this movie has been fabricated. Lovingly so. If any of this takes you irrevocably out of The Wizard of Oz, you may just have no heart. The film has been scrubbed of none of its grain or life. The colors newly pop in that early three-strip way, when Hollywood had something legitimately marvelous to show off. When Dorothy first opens her front door in Oz, the sensation is felt. No matter how many times we’ve gone there, we’re somewhere new.

Every song is a classic, most all of them are stuck-in-your-head, hum-it-the-whole-next-day Great. (I can do without “If I Were King of the Forest”.) One song, the afore referenced “Over the Rainbow”has been ranked by the American Film Institute as the best movie song of all time. And to think that it was nearly cut from the movie… (Or so legend tells us). 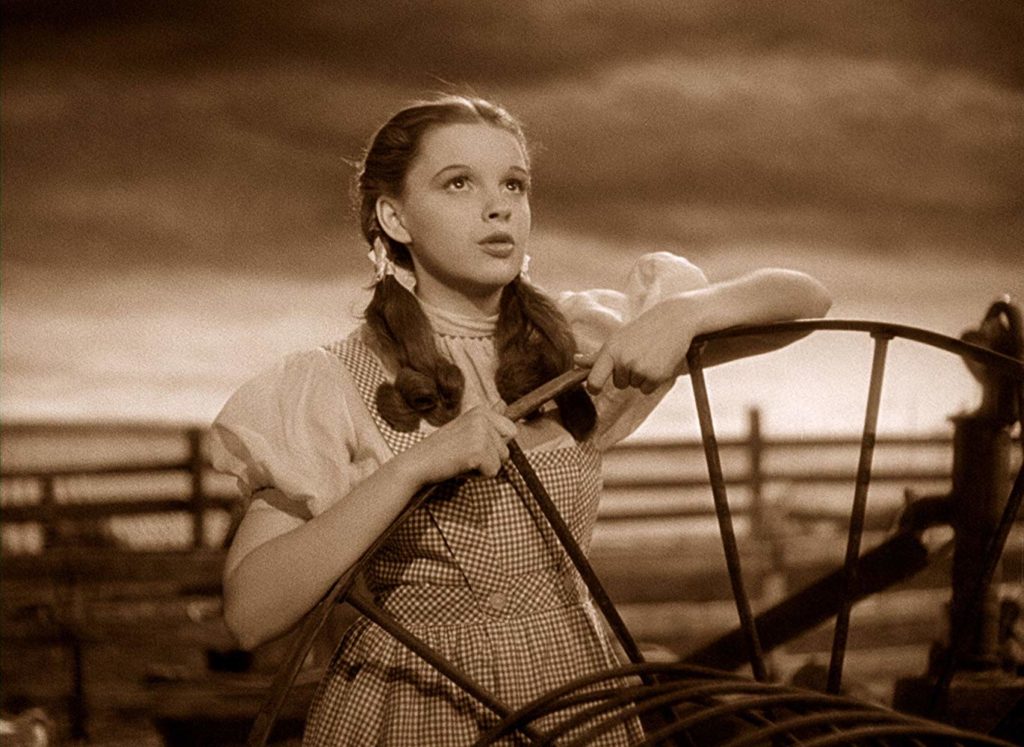 So how is it that a massively scaled, made-by-committee, uncynical 1939 musical that pushes the term “loosely adapted” to cloud-like heights has become one of the most deeply entrenched pop culture staples of the last century? Particularly when its overt display of wonder may for some fly in the face of the final moral of there being no place like boring black and white home? The reason of course lies in the alchemy, and far be it from me to throw a bucket of water onto that. I’m only willing to speculate right now: For me, it might have something to do with the nature of humble all-American Dorothy’s oddly relatable plight; the friendship bonds she forges, her love for her little dog, the blind faith she’s led into, and the fact that her hair is just a wee bit different in every scene. (Again, as legend tells us.)

Or, maybe it’s the scary forest, its surly talking trees, the ridiculously scary winged monkeys, or the cackle and crooked-finger point of the Wicked Witch of the West (simply one of the greatest movie villains ever, rendering a character that “Oz” author L. Frank Baum initially presented as a merely grotesque presence to a whole other level). Margaret Hamilton’s portrayal inspired a “proper scaring”for generations of kids, although the actress’s visit to Mr. Roger’s Neighborhood proved to be just as much of a grounded reassurance in the pretend as it was a point of performance intrigue to my young self. Make believe! Dressing up in a costume! Pretending to be bad! And you can toss it all aside and go home when you’re done. Watching Hamilton’s “Mr. Roger’s” appearance today, I find myself gravitating to Hamilton’s description of the Witch as misunderstood and dejected in her want for more power. What I remember as a kid was her detailing how hard it was to eat lunch with her hands painted green. Yet, perhaps it’s partially due to the existence of this segment that I found the Witch less scary than the forest, the monkeys, or the booming, fiery giant head of Oz. (My own kids vote for scariest Oz element.) But in any case, watching Hamilton put on her Witch costume bit by bit, only to then chat about her grandkids in front of the Trolly track did nothing to diminish my own love of Oz. It’s like discovering that the Wizard is really just a little old man behind a curtain; there’s still plenty of true magic in that world. And that’s true no matter how many times we go back, or how “restored” the initial cinema illusion may become. Oz is where you’ll find me…