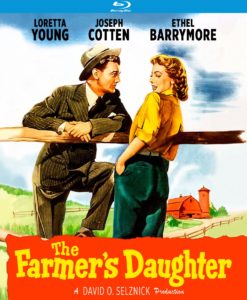 If one has read the title sub-header above carefully, beyond merely registering its bold-formatted placement over the movie and Blu-ray credits of Kino Lorber’s recent home video release, one may be struck by the descriptive verbs chosen to characterize stars Loretta Young’s and Joseph Cotten’s screen dynamic in RKO’s 1947 romantic comedy The Farmer’s Daughter. With its still-timely themes of work, politics, and gender roles, the former indeed “commands” and the latter certainly “charms” in a spirit and manner as effortlessly light as its romantic interplay is briskly entertaining. If a woman can “command” and a man can “charm”, as all 97 minutes of this delightful example of the 1940’s studio film attests, then surely romance and politics, along with their combination, are not as rigidly defined nor as mutually exclusive as they might first appear. 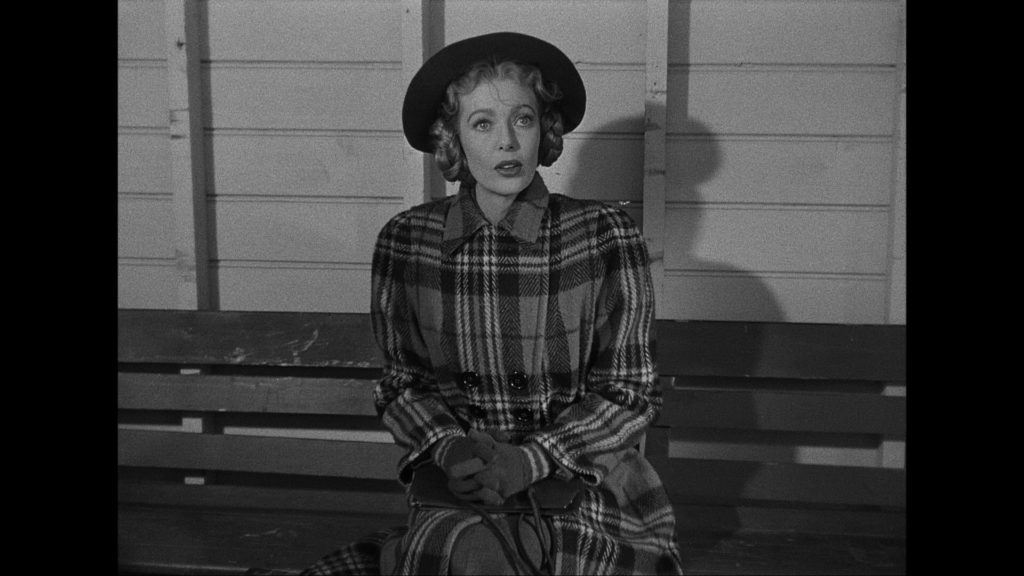 As the film opens, on a mock-up of a cartoon farm painted on the side of an actual barn, the title character of Katrin Holstrom (Loretta Young), a first-generation Swedish-American, leaves the family farm in, we can assume, small-town Minnesota (or a midwestern milieu in its fictional vicinity) for the state’s capital city and its nursing school. On the way, however, a shady sign-painter (Rhys Williams) she warily accepts a ride to town from takes advantage of her good nature – along with all her savings for tuition – and leaves the country lass scandalously stranded at a roadside motel. With characteristic strength and self-determination, resolving to “stand on [her] own two feet”, Katie quickly manages to both make it into town and to secure a job as “waitress” there by the end of the next day. 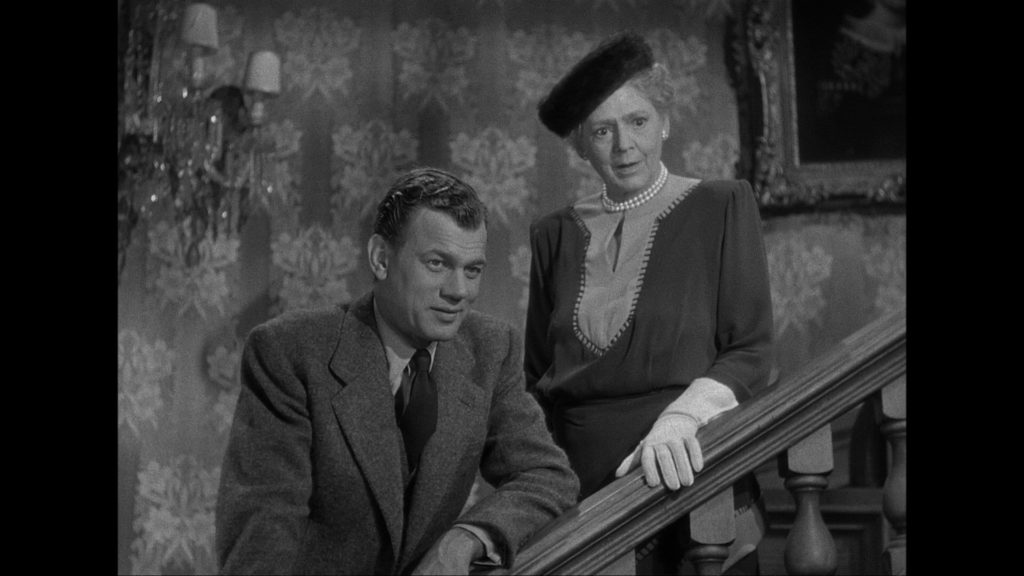 The “waitress” job, as it turns out, is actually an all-purpose domestic position for the palatial and political Morley estate on the capital city’s lakefront. Under the gruff but sympathetic supervision of the household’s butler, Clancey (Charles Bickford), Katie rapidly wins over not only the Morley’s trusted retainer but, in short order, redoubtable family matriarch Agatha Morley (Ethel Barrymore) and her easygoing son, U.S. Congressman Glenn Morley (Joseph Cotten), with her honest pragmatism, wide capabilities, and downhome plainspeech. Jogging around an ice rink one episode and administering a Swedish massage the next, the romantic turn of the bright socially comic proceedings coincides with the deepening feelings developing between Representative Glenn, attracted by her strength of character, and housekeeper Katie, attracted by his female-deferential helplessness.

Even as the romance begins to blossom, however, the headstrong maid breaks with the family over their political party’s recent congressional pick, Anders J. Findley (Art Baker), and in a further surprising turn, after Katie humiliates the questionable candidate during a town rally – confronting the self-serving official with the truth of his supposed “good record” – Katie is rapidly nominated by the opposing party for the very same office. Will plucky Swedish resolve triumph over obstacles to both love and political office?

Of course it will. One of the great pleasures of The Farmer’s Daughter, receiving its first release on a US-encoded digital format in Kino Lorber’s invaluable and visually beautiful Blu-ray transfer, is the effortless seeming studio craftsmanship that contributes to its high standard of mid-late 1940’s Hollywood entertainment. Based on the 1937 play Juurakon Hulda by Finnish author and political activist Hella Wuolijoki, writing under her male pen name Juhani Tervapää (credited in the film as “Juhni Tervataa”), the literary property was initially purchased by producer David O. Selznick, who commenced pre-production before selling the rights and ongoing production to RKO chief Dore Schary. First adapted under Selznick’s supervision by screenwriters Allen Rivkin and Laura Kerr, the action was re-set in the American Midwest and the nationality of its female protagonist changed from Finnish to Swedish.

Completing and extending the production’s complicated and fascinating backstory, the high standard of which carries over from the polish and gloss of Selznick’s original vision for the film – as a vehicle for Swedish-born Ingrid Bergman – to the Loretta Young-Joseph Cotten starring feature that eventually resulted, The Farmer’s Daughter resurfaced as a popular ABC sitcom, starring Inger Stevens in the title role, that ran on ABC for three seasons between 1963 – 1965. Living up to its legacy, The Farmer’s Daughter in its 1947 filming remains in viewing today a true classic of its filmmaking era. From the strongly capable direction of H.C. Potter to the pellucid imagery of cinematographer Milton Krasker to the tuneful accompaniment of composer Leigh Harline – all marvelously presented to great advantage on Kino Lorber’s Blu-ray – The Farmer’s Daughter basks viewers in its effulgent last glow with the efficiency, warmth, and crystalline beauty – done up like the tight braids coiled practically yet attractively high on Loretta Young’s head – of the film’s forthright heroine. 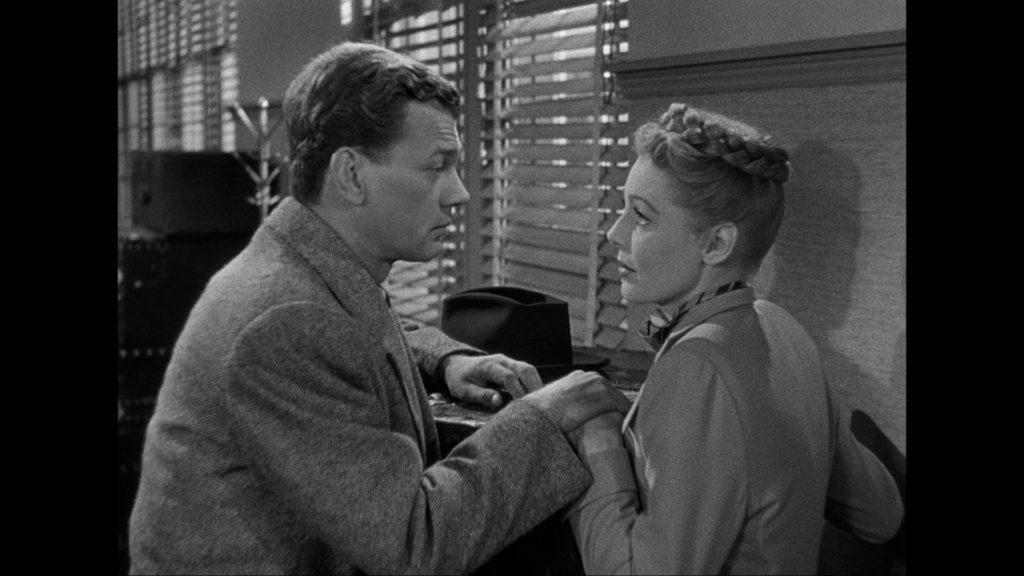 So much so, one feels, that one almost fails to register the welcome oddity, at least in context, of the romantic role reversal occurring in the deepening relationship between Young’s Katie and Cotten’s Glenn. True enough, Glenn is a congressman, and heir to a political dynasty that extends back to his late and legendary congressman father; however, as politician, son, and eventual lover – and there is a strong suggestion throughout that women in his life (such as brittle society journalist Viriginia Thatcher, played by Rose Hobart) have routinely failed to live up to the imposing standard set as both a political and emotional manipulator by his equally legendary mother (as enacted with each half-curling, tolerant smile by a true legend of the stage and screen, Ethel Barrymore) – this rather ineffectual but charming ditherer requires the firm guidance of a strongly feminine character to enact his larger social and political responsibilities. Providing that strength of character, Young’s Katie at film’s end may be bodily carried by Cotten’s Glenn over the political threshold into the South Wing of the U.S. Capitol – as both wife to a standing U.S. congressman and as her state’s recently elected congresswoman – but in a very real sense it has been Katie’s conscience, resolve, and indefatigable perseverance which has carried them as a romantic pair all along.

It is in an equal sense entirely appropriate, then, that among Loretta Young’s many performances from a long and varied career – which began as a child performer during the silent era, continued as one of the prime female stars of the Classic Hollywood era, and extended to the early days of television, with her popular self-titled anthology program, The Loretta Young Show (1953 – 1961) – that this is the role for which the glamorous actress won the Academy Award, received in 1948. Although Kino Lorber’s esteemed commentator and unabashed Loretta Young admirer Lee Gambin points to many roles which showed a greater range in her acting abilities (an early role, opposite Spencer Tracy in Frank Borzage’s Man’s Castle [1933], for one, seems a favorite of just about everyone who has seen it), The Farmer’s Daughter’s Katrin Holstrom offered the actress the opportunity to essay the role of a particular American ideal, or one that should be, of the emergingly strong and independent woman. A woman, one feels in closing, that could have changed the world. 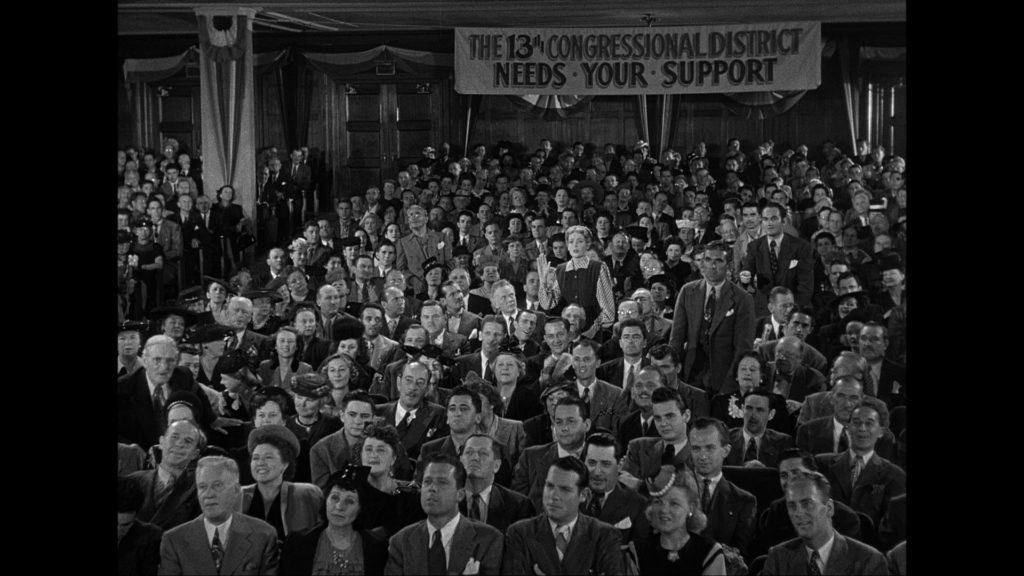 In this continuing year of disgrace, past the movie review proper, this reviewer would like to (possibly indulgently) offer that alluded to visual passage of the film’s farmer’s daughter – an immigrant female from flyover country – passing into those vaulted chambers of the House of Representatives as an image of hope from 70 years ago. Commenting on this final scene, film historian and writer Gambin, an Australian, was reminded of his first visit to the United States: where he was surprised to learn that, unlike as in his native land, voting is in fact not here compulsory. Being an American, this reviewer’s own surprise while viewing this triumphant image was learning himself that voting – the essence of political change and having one’s voice heard – should be taken so seriously somewhere across the world as to require each of its citizens to exercise their citizenship.

Credits rolling on these highly enjoyable and vastly entertaining pictures of the past, a supreme testament to the personalities, storytelling prowess, and technical knowhow of the postwar American film industry, this cinemaddicted viewer couldn’t help imagining a further chapter in his continuing (and, at present, temporarily stalled) series of alt-film history called Cinema of Forgotten Dreams. Let’s title this one The People’s Congresswoman, an imaginary 1953 sequel to the 1947 romantic comedy under review.

After the final image of The Farmer’s Daughter, we pick up with the Congressional Morleys, played again by a commanding Loretta Young and a charming Joseph Cotten, and imagine the romantic comedy political pair of The People’s Congresswoman first successfully legislating their Right To Vote bill, and then going on to chair federal funding for state-subsidized art programs in their home state – inspiring new generations of Americans – which in turn diverts money from defense spending towards nationwide civic improvements and community-driven cooperation. Barriers are broken down, immigrants from all over the world are welcomed, women are elevated to positions of responsibility all over the country, culminating in U.S. Representative (MN) Katrin Morley’s monumental US-Soviet Agrarian Pact of 1950: an international outgrowth of her pioneering Small Farms and Businesses bill, providing loan forgiveness and tax exemptions to family-run farms, as a free agricultural trade agreement whose first provision calls for mutual nuclear disarmament, thus leading to World Peace.

So as President Katrin Morley slings the first First Gentleman, retired U.S. Representative (MN) Glenn Morley, over her shoulder and into the Oval Office like a sack of field potatoes – with Universal Healthcare, Open Immigration, and Gender and Minorities Equal Rights Acts awaiting the next two terms – we as imaginative viewers may not have effected real change in our own world, but we possibly may have offered a viable alternative to despair. As Madame President once observed, who we might remember began life as a farmer’s daughter, “However so humble or powerless, voting is the right of every man and woman.” Who says romantic comedy can’t save the world?

The images in this review are credited to DVDBeaver and are taken directly from Kino Lorber’s Blu-ray release.