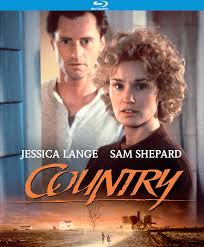 Few films are realistically set in the Midwest, so it is somewhat surprising to sit down 34 years later with a stark drama of America’s Heartland from a decade whose contemporary blockbuster offerings rarely were noted for their realism. The second release from Disney’s feature film distributor Touchstone Pictures, following the popular romantic mermaid comedy Splash (1984), Country’s hard-edged story and unglamorous locale were a far effects-barren cry from multiplex-surrounding ghost-hunting goofs in Gotham alongside time-traveling teens near LA. The unmade-up faces of a plain-dressed couple peering uncertainly into the far distance, graphically suspended over their tiny-figure children walking just beyond sight up to that same twilight-burnished landscape, is a suitably symbolic poster image for the mid-1980s, Iowan anxiety over the unknown fate of the family farm.

Jessica Lange and Sam Shepard co-star as Jewell and Gil Ivy, Iowa farmers and parents of two struggling to keep their homestead, corn acreage, and livestock viable though natural disaster, a tightening produce market, and the larger collapse of federal farm assistance programs. Opening on a nighttime harvest in which a tornado unexpectedly rips a terrifying path of destruction over air-lifted farm equipment and swirling corn (a practical effects sequence with all the more impact for occurring within the visual realm of frightening probability), the somber note of sudden upheaval and swift reversal struck in this establishing scene reverberates through the financial pressures, callous government treatment, and ultimately the community and family tensions to follow. As their livelihood is threatened, the individual responses of Gil, Jewell, and her father, Otis (Wilford Brimley), to policies and procedures designed seemingly to separate dedicated family farmers from their land detail the harsh new realities of rural American survival. 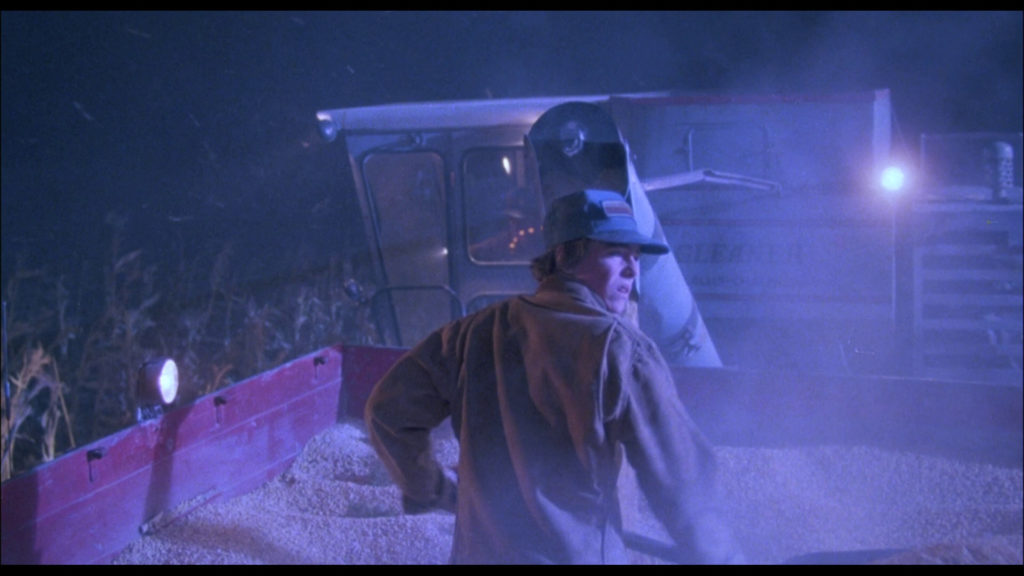 Welcome to the 1980s. As a viewer whose first movie-going experiences date roughly to the time of Country’s release, the milieu of long, dusty roads, rusty pickup trucks, faded flannel jackets, and dimly-lit bars seem familiar in the way affluent suburbs, noisy malls, stone-washed jeans, and flashy arcades seemed restricted mainly to the movies. Far from the candy-colored funscape pop culture of the period traded on, most younger moviegoers staring up at sixteenth-birthday shenanigans lived well outside the gated-like communities shown in John Hughes’s Shermer, Illinois. Gil and Jewell’s teenage son Carlisle (Levi L. Knebel) may listen to tantalizingly strong, possibly New Wave-inflected beats on his Walkman in one mid-film scene, but such is purely a moment’s reprieve from the milking chores and barnyard clean-up that fill his working hours daily. 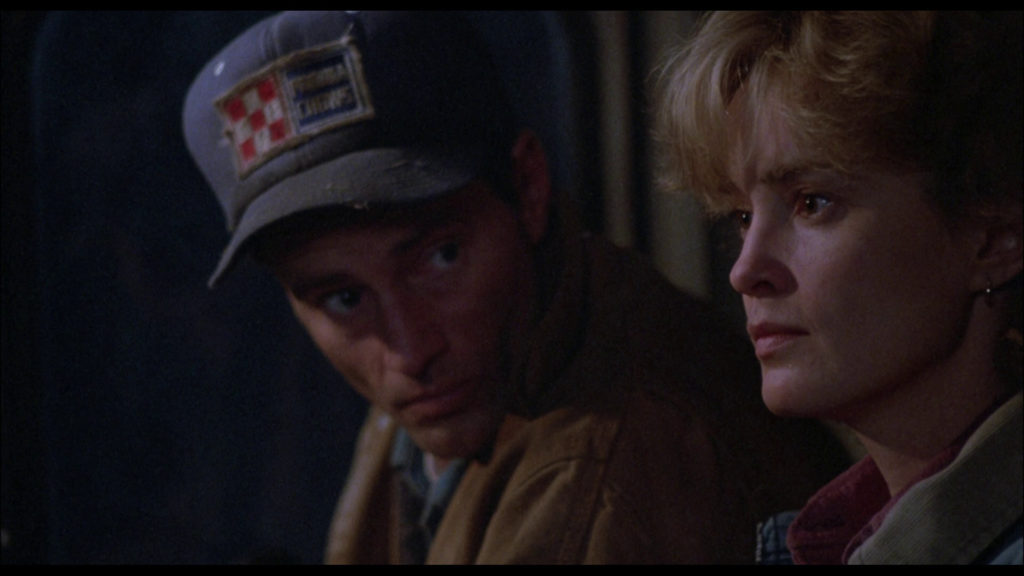 At its heart of hard realism, Sam Shepard and Jessica Lange’s real-life chemistry infuses the drama with a timeless quality that never feels less than emotionally true. As Gil, the late Sam Shepard’s natural screen strength and shyness remain a potent combination, hearkening favorably back to the all-American, Lincolnian qualities of masculinity once embodied by Gary Cooper or Henry Fonda, and his character’s gradual, alcoholic retreat from loans, liens, and loss becomes all the more tragic as he is essentially robbed of the power to respond to those unforeseen challenges. Gil’s outrage is directed within, and his once easy-gong temperament is besieged by self-doubt and misdirected anger, culminating in a drunken, physical attack on his own son and temporary banishment from the home. Sam Shepard’s portrayal is frankly fearless in uprooting the age-old myth of the strong, silent male.

Rather, it is left to Jessica Lange’s Jewell to hold the farm and family together, and it is interesting to note the shift in the power dynamic both in the business and domestic spheres at the time of Country’s release. Introduced literally digging up and bodily dragging out her son Carlisle from the tornado-heaped mound of corn he is buried under, Country signals early that this remarkably strong woman will bear the brunt of the film’s drama. As the film’s co-producer, with screenwriter William D. Witliff, Lange’s Jewell, both as a character and in the actress’s portrayal, is the film’s true hero, and whether preparing hamburgers in the film’s opening scene, rallying her neighbors to action in the film’s climactically exciting and very ‘80s montage sequence, or leading a Norma Rae (1979)-like chant against the mortgage bankers and auctioneers at its stirring conclusion, Country is Lange’s movie from beginning to end. 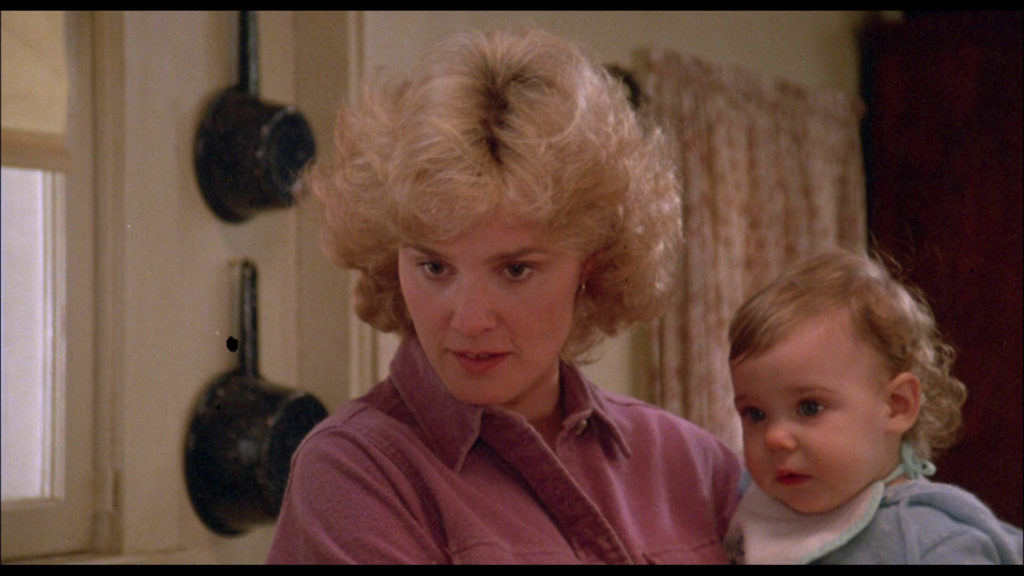 Director Richard Pearce has one other highly regarded rural drama to his credit, 1979’s Heartland, so it is tempting to assume that he came by his resistance to the mild run of high-concept comedies and low-stakes action thrillers with which the mid-1980s were glutted quite honestly. And while the feel-good formula of perseverance and reward certainly holds true by film’s end, with the postscript coda of the FHA’s injustices towards family farm loans apparently “addressed”, the aforementioned montage sequence, building towards stirring “triumph” at the end, is balanced by the film’s darker thematic elements and its realistic treatment of both the challenges small family farmers face and the unreservedly grim nature of those challenges. Life looks hard when measured by corn tonnage or viewed down unpaved, gravelly roads that lead nowhere, and the brutal reality conveyed by Country is that once separated from their family farms – in essence, robbing the heart from the Heartland – these small family farmers will have no place to go.

Kino Lorber commentator Lee Gambin muses on many of the issues raised politically and era-historically by Country’s 1984 release and reception, contextualizing the film with other thematically contemporary rural dramas like Robert Benton’s Places in the Heart and Mark Rydell’s The River (both also 1984). Like Country, Places in the Heart, with Sally Field, and The River, with Sissy Spacek, feature strong female protagonists preserving a way of life threatened by forces both natural and unnatural, from outside the larger community and from within the family itself. In the current cultural and political context, perhaps a triple-bill of truly all-American and female-centric artistic populism is in order – countering a commonly accepted view that entertainment of the 1980s eschewed socially progressive content – to remind and empower a new generation of viewers. Fortunately, Kino Lorber’s timely and visually-accomplished Blu-ray release has arrived to provide a suitably strong portion of that now-more-than-ever viewing need.