A Film Mural Of Art, Revolution, History, And Politics… With One (Crucial) Figure Cropped Over 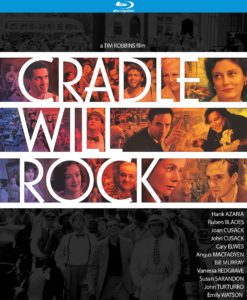 “Agitprop”, originating in the Soviet Union as state-sponsored media manipulation but later expanded to define several forms of strongly politicized art, would undoubtedly be employed by the coast-to-coast broadsheets of newspaper tycoon and yellow journalist William Randolph Hearst to describe the free, creative expressions that arose out of the federal government’s experimental venture into subsidizing visual, performance, and dramatic works during the mid-1930s as part of its Works Progress Administration (WPA). Dramatizing this already dramatic period of American history, Tim Robbins’ 1999 film details the brief flourishing of the Federal Theatre Project (FTP) against the broader artistic and historical backdrop of colorful personalities, sweeping events, and conflicting interests that led to its quick demise. Like a film mural of art, history, revolution, and politics, Cradle Will Rock very well itself might have earned a negative honorarium in Hearst’s Examiner, or, more tellingly, his strident scandal-sheet the American, as unabashed “agitprop”; and possibly even crowned in tabloid indignation by a certain descriptor decidedly rose-tinged. A passion-hued splash-stroke, one feels, the film and its director wouldn’t mind in the least.

Hearst (as played by the character actor John Carpenter) is indeed represented as one among several historical figures interwoven – from Jewish political correspondent and Italian fascism apologist Margherita Sarfatti (Susan Sarandon) to FDR’s Secretary of Commerce and New Deal architect Harry Hopkins (Bob Balaban) – into Robbins’ Public Works-like tapestry of social and artistic power struggles during the Great Depression. Other strands interwoven include Nelson Rockefeller (John Cusack) and Diego Rivera (Rúben Blades) clashing over the latter’s 1933 Man at the Crossroads mural, which prominently depicted Lenin in the entrance lobby to the former’s family skyscraper, gallery, and theater complex; chief director Hallie Flanagan (Cherry Jones) and her unsuccessful defense of the FTP against charges of socialist and communist sympathies during a 1938 House sub-committee hearing headed by reactionary congressman Martin Dies (Harry Yulin); and finally the economic unrest caused by continuing battles over labor and capital, such as the murderous attacks upon union organizers by Little Steel strikebreakers in 1937, as indirectly portrayed in the high society ditherings of fictional New York industrialist Gray Mathers (Philip Baker Hall) and his aristocratic wife Comtesse La Grange (Vanessa Redgrave).

Tying all these diverse strands together, along with an (additionally fictional) unrequited romance between a morally compromised FTP ventriloquist (Bill Murray) and a sexually repressed Dies committee testifier (Joan Cusack), is the title’s definite article-adding and ill-fated 1937 creation and Federal Theatre production of the labor-themed musical The Cradle Will Rock by composer and librettist Marc Blitztein (Hank Azaria), producer John Houseman (Cary Elwes), and 23-year-old wunderkind director Orson Welles (Angus Macfadyen). The mural destroyed, the FTP shut down, and the wealth and holdings of the powers-that-be conserved; Project 891’s theatrical agitprop nevertheless takes to another stage on June 16th, 1937 – with the composer playing a piano on a bare stage and the performers (including those played by Emily Watson, John Turturro, and Barnard Hughes, among others) joining in from the audience – despite the Brechtian musical effectively having been shut down by the federal government.

Robbins’ time-warping and dramatically-licensed film mosaic skillfully condenses and, for the most part, balances the multiple storylines and characters in a keenly sardonic manner reminiscent of his directing mentor Robert Altman, for whom the actor starred in the latter director’s broad Hollywood satire The Player (1991), and who later took a role among another plurality of characters in the Raymond Carver short stories adaptation Short Cuts (1993). Similar to Altman’s masterpiece Nashville (1975), the social and political spheres are dramatically fused in Cradle Will Rock’s sociological delineation of life during a highly-fraught period of historical change – the actress who will play the lead role in the Depression-themed musical is first shown sleeping in a theater behind a movie screen while its composer is artistically inspired to its expression during a police raid on a peaceful Central Park demonstration – with larger events that will shape the national discourse towards topics like art and power. In its whirling and breathless tone, especially during its theatrical backstage scenes, this reviewer was further reminded of Woody Allen’s frequent forays into the pop cultural sphere of the 1930s: Bullets Over Broadway (1994) and The Purple Rose of Cairo (1985) in particular delineating the tragi-comic dimensions of downtrodden individuals – like Emily Watson’s stagestruck FTP hopeful Olive Stanton – who live vicariously through the vibrant theater, movie, and music offerings of that artistically fertile period. 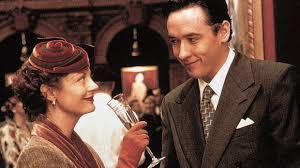 These comparisons are not meant to dilute Robbins’ achievement here, as he clearly understands and effectively communicates the spirit of the time with verisimilitude, wit, and a certain panache. For the latter, this reviewer would feel critically remiss, however, in not further invoking an artistic spirit beyond those in the film’s fantasy passages – where composer Blitztein is both haunted and encouraged by “ghosts” of his dead wife (Susan Heinbeinder) and then-living playwright Bertolt Brecht (Steven Skybell) – in the subject’s larger production-within-a-production and its outsize and guiding personality. In a contextualizing essay by film scholar Geoffrey O’Brien, accompanying Criterion’s 2017 home video release of the Baroquely cosmopolitan Shakespeare adaptation of Othello (1952), the writer describes an inspiring artist “at once obsessive, seductive, and unpredictably temperamental”, and while Cradle Will Rock suggests glimmerings of these qualities in a much earlier and equally storied production, the rather unflattering depiction of his lurching and chaotic handling of The Cradle Will Rock ­– where the ego-driven director consistently proves a drunken buffoon and loutish libertine in Angus Macfadyen’s one-note portrayal – develops in story and film as a deep disservice to the crucial artistic force that is, was, and will remain Orson Welles.

Coinciding with Cradle Will Rock’s release on Blu-ray, Orson Welles has rather miraculously completed, thirty-two years beyond the grave, his early-to-mid 1970s-shot, Hollwood-within-Hollywood production of The Other Side of the Wind, assembled and reconstructed across multiple decades and legal entanglements by several dedicated Wellesian acolytes, who include writer/director Peter Bogdanovich (who co-starred in the film) and producer Frank Marshall (who worked as a crewmember). Furthermore, in two life-joining and bookshelf-bridging biographies of Welles, his fellow native Wisconsinites Patrick McGilligan, in his 2015 Young Orson: The Years of Luck and Genius on the Path to Citizen Kane, and Joseph McBride, in his 2006 What Ever Happened to Orson Welles?: A Portrait of an Independent Career (the latter of whose study was based on first-hand observation from also co-starring in The Other Side of the Wind), individually draw vivid and affecting portraits, per their respective biographical sub-titles, of the director and actor who both would make Citizen Kane (1941) and had made Citizen Kane; and, frankly, the emerging artist who continues to posthumously provoke and inspire is in this respect entirely lost within the frequently fraying fabric of Robbins’ occasionally overspun tale.

Welles, one might argue, as director and visionary is the crucial thread between his and John Houseman’s Project 891 production of The Cradle Will Rock against the larger social, political, and historical milieu of Robbins’ Cradle Will Rock, and his artistic stand against the powers-that-be – alongside producer Houseman and composer Blitztein – lacks similarly crucial force in Robbins’ more diffuse presentation. From the director’s own stentorian-style newsreel narration that opens the film, unambiguously mirroring the famous mock newsreel that would later open the director-within-the-director’s Hollywood debut, through the camera-swirl of bustling activity captured on- and backstage, further drawing cinematically on the energized mise-en-scene that came to define Orson Welles’ unique style, to even the Shakespearean touch of including comic relief in Tenacious D’s Jack Black and Kyle Gass, as untalented ventriloquist apprentices, seem individually indebted to Welles without honoring his inescapable influence.

That Orson Welles’ own account in his unproduced 1983 screenplay of his involvement in these events was left ignored in Robbins’ re-focused screenplay, the story as broadly told threatens to become as unfocused at times as the schizophrenic divide between Bill Murray’s Tommy Cruikshank pitching woo to a reactionary fink on one personality end while his dummy sings The Internationale on the other. Like Lenin removed from the Diego Rivera Man at the Crossroads – a crucial figure of the artist’s vision essentially cropped over – misrepresenting the prime artistic force of the production’s backstory effectively robs the larger story and historical context of its power; that “force” again left a gaping hole where the story’s stabilizing yet dynamic center might have been. 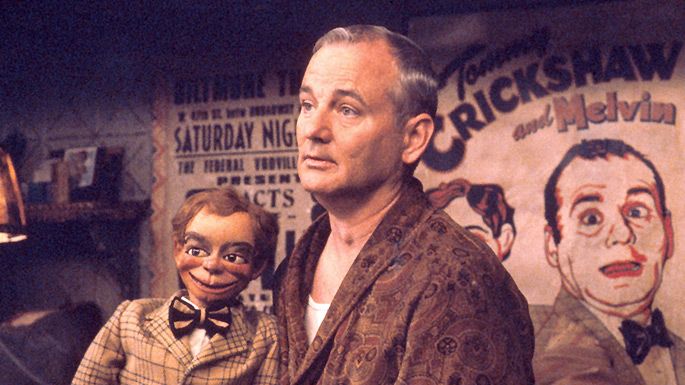 Overall, though, Robbins’ Cradle Will Rock, while undercutting the artistic process of its conception in order to “demystify” the very artist who conceived it, remains a reservedly admirable, entertaining, and ambitious production-of-a-production, thematically impressive in scope and artistically accomplished in execution. Kino Lorber’s first-time release on Blu-ray comes with an absorbing 2018-recorded commentary by Tim Robbins, who delves deeply into his own conception, casting, and production of Cradle Will Rock while drawing trenchant parallels to the current political climate. Returning to Welles’s later artistic inspiration (and still later his fearsome foe) William Randolph Hearst and the newspaper baron’s probable dismissal of all politically-tinged art as “red agitprop”, stories that have nothing to say are probably better left unsaid. Cradle Will Rock has plenty to say, and looks magnificent in high definition, even when the power of its saying fails to adequately recognize and repay the debt of artistry to those that said it first.

The images used in this review are only a visual reference to the film and are not meant to reflect the image quality of Kino Lorber’s Blu-ray release.