You can’t escape it. It’s always lurking in the shadowy depths, slowly circling, waiting for its chance to strike. It’s an outsized beast leftover from a long-ago time that will consume everything in its path, and will do so without pity or remorse. It is inevitable. What it is, is that thought you have while watching The Meg that Steven Spielberg’s Jaws is just a really, really good movie and The Meg is just…not.

Now it might not be fair to compare every single shark movie to Spielberg’s masterwork, but how can you avoid it? It’d be like making a movie about a giant ape and not expecting comparisons to… I dunno, some other giant ape movie. Jaws has become, by virtue of its continuing popularity (over 40 years after its intitial release!) and its unmatched quality, the benchmark by which all shark movies are judged against. The Meg is no exception, and it has even invited such comparisions through the artwork in its marketing campaign and the numerous easter eggs and callbacks sprinkled throughout the film (they even named the dog Pippin!).

But The Meg isn’t Jaws, nor should it try to be Jaws. And the more The Meg winks at referencing Jaws the more we’re reminded that it’s not Jaws! Sheesh! You’d think filmmakers would have learned this by now. Don’t remind audiences of a better movie! It’s not that The Meg is a bad movie, per se. It’s competently made, everyone does a fine job, the actors are fine, the effects are… fine. But it never rises above nor sinks below that lukewarm level of just being… fine. Any better, and we might have one of those surprising blockbusters that wedges itself within the cultural zeitgeist (looking at you, Mad Max: Fury Road). Any worse, and it might’ve ascended (descended?) into the rarified “so bad it’s good” category, and become a must-see that way. But The Meg isn’t good enough nor bad enough to be really memorable, and that seems like a waste of potential.

[The Meg] never rises above nor sinks below that lukewarm level of just being… fine.

The Meg stars Jason Statham (Spy, The Transporter) as Jonas Taylor, a diver who specializes in deep sea rescues. When an exploration mission in the Mariana Trench goes wrong, he’s called in to get the survivors out. Once he’s on the ocean floor, however, it becomes clear that the exploration team was attacked by something big- and that something is still out there waiting for another chance to strike! This turns out to be exactly like a traumatic event in Taylor’s life from five years ago in which he had to leave people behind to die. Maybe he wasn’t crazy after all, and there really is something monstrous out there eating deep sea submarines! 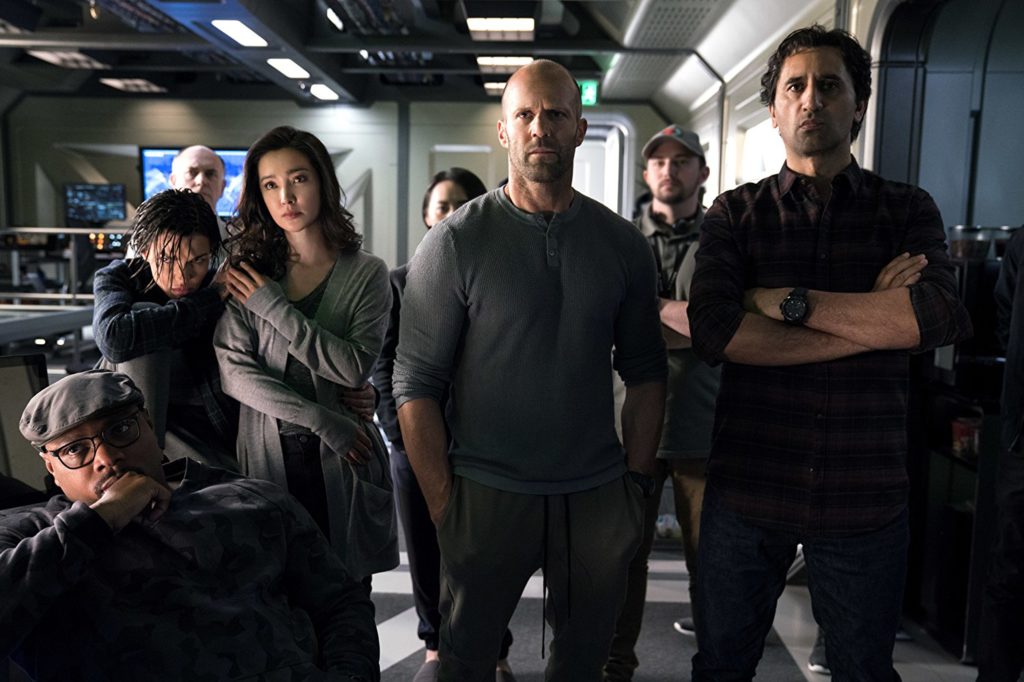 That something is, of course, the titular “meg”- a megalodon whose species has been extinct for nearly 3 million years. So what, exactly, is a megalodon. Well, on Earth for about 20 million years, megalodons were basically giant great white sharks. They could grow up to nearly 60 feet long, and had serrated teeth that could get up to 7-and-a-half inches in length. That’s a tooth nearly as large as my entire hand. This is a shark of an impressive size. For the movie, however, it’s not nearly big enough. In Meg, the shark measures nearly 80 feet long, and boy, does it need to eat a lot of puny humans in order to have enough energy to keep moving.

The movie isn’t half as well-made as Jaws, neither does it have the lowbrow schlock appeal of a SyFy shark movie.

The meg escapes the confines of the trench where its been hiding out due to a well-timed plot contrivence. Taylor and his team then have to track it down and kill it before it causes untold havoc on the nearby crowded beaches of China. Taylor is joined by Suyin (Bingbing Li, Transformers: Age of Extinction), Mac (Cliff Curtis, Sunshine, The Last Airbender), Jaxx (Ruby Rose, Orange is the New Black), and DJ (Page Kennedy, Freaky Deaky). 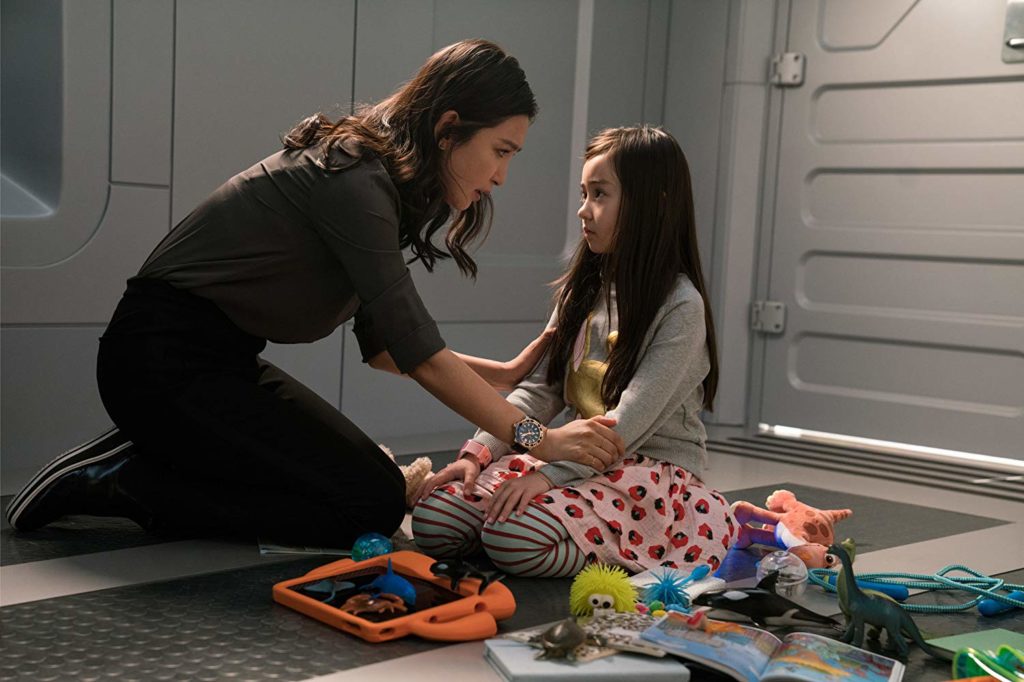 The Meg is directed by John Turteltaub, the director of the National Treasure movies and The Sorceror’s Apprentice. Turteltaub is a perfectly… fine director. I admit to liking at least the first National Treasure and sitting through the whole of The Sorceror’s Apprentice willingly. I wonder, though, if this movie needed someone with more of a mean streak.

The movie isn’t half as well-made as Jaws, neither does it have the lowbrow schlock appeal of a SyFy shark movie. It has some good action sequences and a couple of effective jump scares (how a shark of this size just materializes out of nowhere eludes me, but whatever). But overall, the movie is strictly paint-by-numbers with digital creature effects that are fine, but not noteworthy (I liked the rough, prehistoric skin texture the shark sports). Shark movies really have to keep moving forward in order to stay alive, but The Meg, I’m afraid, is dead in the water.