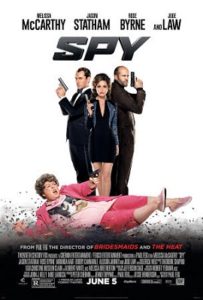 Director Paul Feig has a certain chemistry with Melissa McCarthy that has largely served him well.  Her scenes in his film Bridesmaids stole the show in many ways, and he found more success with her odd-couple like pairing with Sandra Bullock in The Heat.  With his latest film, Spy, he is hoping to strike another hit in as many pairings.  And if that is not enough, he is already looking to re-team with both Melissa McCarthy and Kristen Wiig, fromBridesmaids, in next year’s Ghostbusters reboot.

Spy follows the story of Susan Cooper (McCarthy) who is an analyst for the C.I.A., who assists and coordinates logistics for her partner in the field, Bradley Field (Jude Law-Black Sea, Sherlock Holmes).  Bradley is the American version of James Bond (even though in real life Jude Law is really British), as he effortlessly slides his way from a high-end party upstairs into a secret lair downstairs, all with the voice of Susan Cooper in his ear directing him with building schematics, heat-recognition software of where the bad-guys are, and even drone strikes for cover.

When Bradley accidentally kills a Russian arms dealer who is the only one with knowledge of the location of a suitcase nuke that he intends to sell which will be detonated in a U.S. city, the C.I.A. must spring into action to locate his daughter Rayna (Rose Byrne-Annie, Neighbors) who has now assumed control of his crime syndicate. 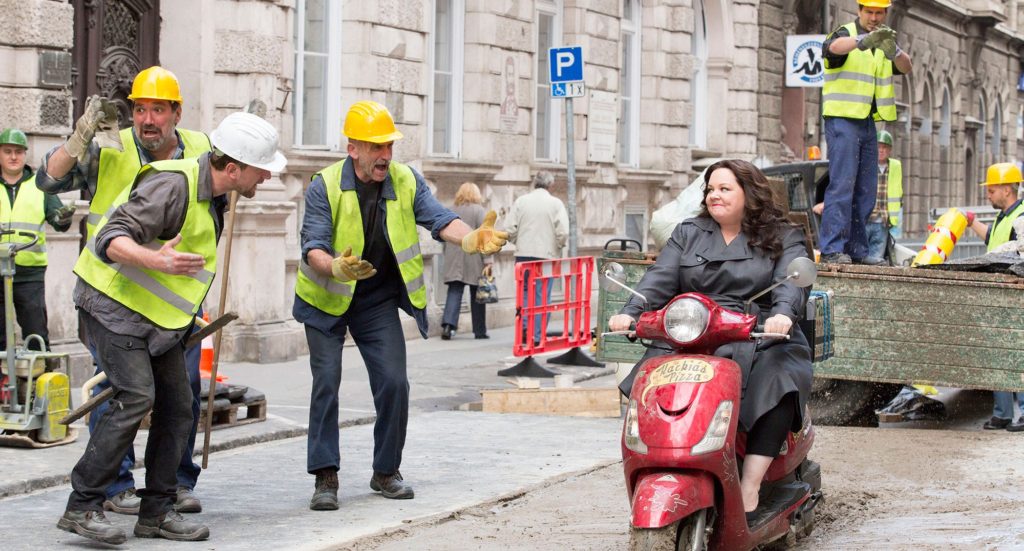 Through a series of mishaps, and the Intel that Rayna has knowledge of all of the active C.I.A. operatives, Susan Cooper is given her chance to finally be an agent in the field.  This will of course involve the typical Melissa McCarthy shtick of very physical comedy, and clever quips from her various undercover identities that often involve vulgarity aimed at the target of her ire.  While this routine was starting to get a little bit worn thin in terrible films like Tammy, and average buddy-films like Identity Thief, here it feels more organic, much more like she was in both Bridesmaids and The Heat. 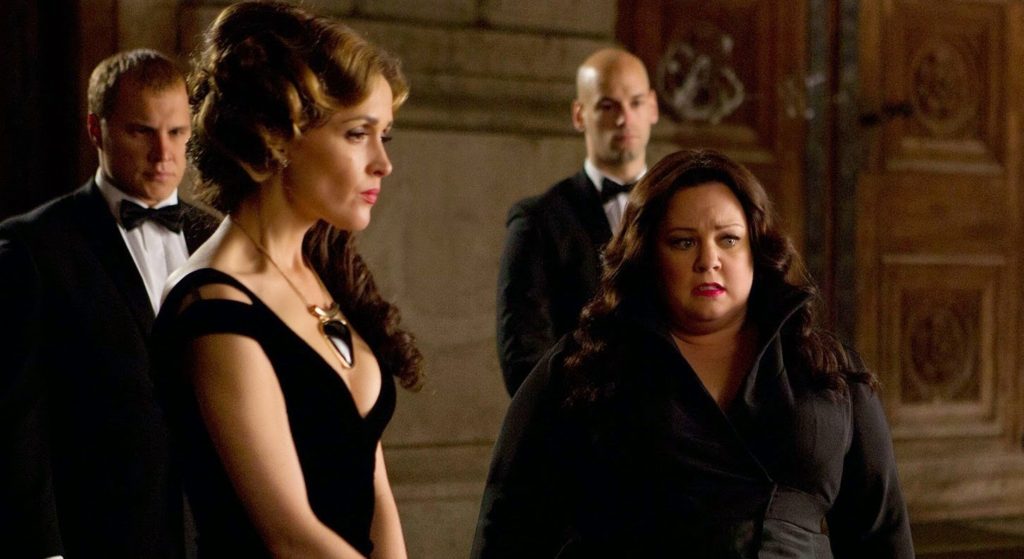 The film gives its nods to the James Bond franchise with an opening mission, followed by a title/credit segment complete with a James Bond-like song with overview scenes of the movie played out over the song.  There is a scene involving the American equivalent of “Q” who shows off some of the gadgets that the C.I.A. is working on, as well as the ones Susan Cooper is going to receive for her mission.

There is globe-trotting from Virginia to France, to Italy, and to Hungary. Rather than female exploitation that is a staple of James Bond, here we get a graphic collection of photos found on a terrorist’s camera of his genitalia in compromising shots. All of it is staged for laughs, of course, but with the action violence and language, Spy earns its R-rating.

Jason Statham (Expendables, The Italian Job) showcases his comedic chops as well, playing super-spy Rick Ford who hilariously boasts of his international accomplishments as a spy that can’t possibly be true.  This includes jumping a car onto a speeding train while he was on fire (not the car, but actually him), jumping from a great height with only a raincoat as a parachute and breaking both legs when landing while still being able to convince those he was infiltrating that he was an active circus performer. The list goes on, and works very well when paired with McCarthy’s character. Morena Baccarin (Firefly, Serenity, Homeland) also has some good scenes, but is barely in the film. It seems as if they could have done more with her character arc, but she is a good presence in the scenes she has.

This is an action-comedy franchise that lends itself nicely to what McCarthy does and will allow her to return to the character again and again while still keeping it fresh with new missions and situations.  That could also be true with The Heat, but given Sandra Bullock’s hesitation to do sequels (especially after Speed 2 all of those years ago), Spy seems to be a better fit for that type of reoccurring character. Allison Janney (The Way Way Back, Juno) is great as always as the C.I.A. director, and Miranda Hart is pretty funny as a British side-kick to McCarthy who also works at the C.I.A.

Comedy is an especially hard genre to write about as there are so many types of comedy, and everyone reacts to the intended comedy differently.  Lately, successful comedy seems to go for the lowest common denominator and sticks to crudeness as a substitute for humor. There is certainly some of that here, but the general premise of it being an action-spy film allows for there to be a good share of situational and physical comedy that can come into play which should help it reach a larger audience who can take the vulgarity in stride knowing that there is more to be offered.  This is in no way meant to suggest that this is ever going to be confused for “high-comedy”, and it frankly shouldn’t.  As far as pure entertainment and escapism, it certainly hits the mark.  It doesn’t take itself seriously, and asks that you don’t either.  There will most likely be more adventures awaiting Susan Cooper and her team at this fictional version of the C.I.A.