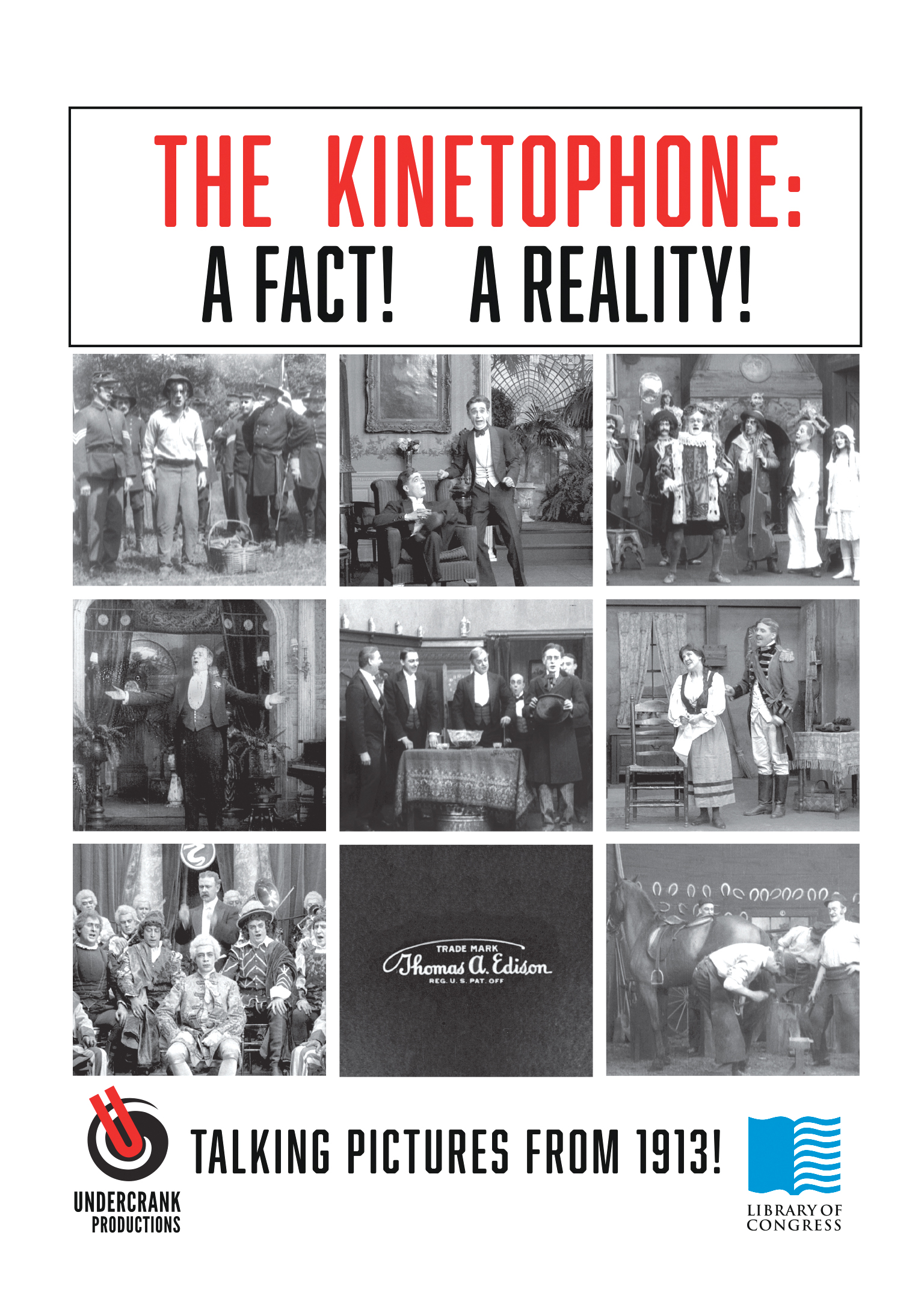 Singing in the Rain has immortalized the transition between silent films and talkies in the popular consciousness. Talkies were, however, already being developed from the beginning of motion pictures. Instead of providing historical context, I will be reviewing the films on hand. This has already been done here and here and in a wonderful extra feature on the disc, a twenty-five minute documentary entitled, “So Amazingly Perfect They Are Really Weird” (2018).

The program begins with a three minute excerpt of an originally six minute program entitled “The Edison Kinetophone.” It’s a simple demonstration of an actor talking about the value of having synchronized sound with picture. Just imagine someone being able to hear this 100 years from today, the speaker intones. And, sure enough, we hear him loud and clear. A bit of background noise from a cylinder which is likely no longer in existence, but we hear and see him nonetheless.

Next, we hear from “The Musical Blacksmiths.” This delightful little piece of music and light comedy is probably my favorite in the bunch. The quintet which appears on screen is polished (but not too polished!) and we get to hear some of the fine harmonies common in 1913 pop music. The MacGuffin is that they’re blacksmiths…it’s really a showcase of a great four or five singers, depending on the moment in the film. I’m fine with the slim storyline; it gives me the opportunity to hear good vocals.

“So amazingly perfect, they are really weird!”

“Nursery Favorites,” the next on the bill, is probably the best-known of the Edison Kinetophone films. It’s appeared on several DVDs and YouTube videos before, but this time, the audio is well-transferred and the picture is much clearer than before. Once actors appear, they rarely disappear, which leads to an extremely crowded feel by the end. The music is lovely and the performers hit their marks, so all’s well that ends well.

“The Deaf Mute” seems to be incomplete; it’s the only film which doesn’t bear the THOMAS A. EDISON final screen the others do. It’s a clever little set-up, the only film which was recorded outside for this DVD. The setting is the Civil War and the Union soldiers are convinced the man they’ve apprehended is actually a rebel soldier. They put him through some tests to see if he’s actually deaf and mute as he claims. Whether he passes them with flying colors, I’ll leave you to decide.

“The Edison Minstrels” is likely the best produced musical number in the collection, though it doesn’t have the first place in my book because of its racially insensitive material. A lot of work was put into making this film work with the cylinder which has survived since the cylinder and the film are from alternate takes. The soloists are superb and the costumes are great; it’s such a shame that they had to throw in a couple of guys in blackface to sell the premise.

“The Five Bachelors” are four men up to no good and one “hater of women” who is more mouse than man. Secret societies tend to draw audiences in and this secret society of bachelors was, for me, no different. In a series of tests which amount to fraternal hazing, the vocal quartet visits mayhem upon the unsuspecting(?) individual who has come into their midst. Paddling and psychological torture ensue, all wrapping up in time for the end of the reel. The blocking on this one, while still proscenium-style blocking, seems the most natural of most of the shorts. The frame doesn’t get super cluttered with the actors and this sort of thing had doubtlessly been done on stages all across America. Additionally, as a bachelor myself, I got a good chuckle out of the film, even 105 years later.

“The Old Guard” is tough to hear properly. Bad French accents seem to date back to at least 1900 in American productions. It would’ve honestly come off better if they’d simply spoken clear English. The overdramatic death at the end is made palatable by the double-exposure of Napoleon “himself” as the old soldier dies. It’s a striking effect, one which is not lost on me over a hundred years later. Still, the audio has not aged well and it likely wasn’t easy to understand at first release and the actors had clearly run through a take prior since there are dark spots on one of the knees of their pants where they later kneel in the take we see. I suppose the costume girl didn’t likely have an extra set of white pants waiting for them in the wings.

“Jack’s Joke” is easiest to understand due to the fact that the ruse…well, I won’t ruin it for you. Let’s just say there’s quite a bit of shouting in the middle section of the film. It’s all in good fun, but it does lead to the most intelligible, non-musical moments in the entire DVD.

There’s one more rather funny Kinetophone feature for while a cylinder is still missing, but I’m rather glad that Ben Model included: “The Politician.” It’s more than clear what is going on and the angry crowd makes for some really great moments.

At 76 minutes, this is not just a wonderful time capsule: it is a truly entertaining bit of film history which I’ve returned to at least three or four times since Ben sent me a copy of the film to review. It’s a must for any early-film aficionado, so go to Amazon and order it!