I had two very big questions when I sat down to watch Fire Birds, a miltary action-adventure film from 1990 directed by David Green (Buster). The first was: How much of a Top Gun ripoff was this going to be? The other was: Which Nicolas Cage did they get to appear in this movie? Unfortunately, the answer to the first question is: a pretty big one, but without any of the style or charisma. The answer to the second: they got exactly the wrong Nicolas Cage.

That Fire Birds is a so derivative of director Tony Scott’s 1986 military-hardware porno isn’t all that surprising. Scott’s movie was highly successful. Coming when it did at the height of Reagan’s America, it’s ‘rah-rah, USA!’ approach, combined with its hardware fetish and Tom Cruise’s blue hypergiant levels of star power, Top Gun pulled in audiences and made a ton at the box-office. And like most highly successful films, it spawned a host of imitators. But Fire Birds lacks nearly everything that makes Top Gun work. Director Green lacks Scott’s sense of style and composition. The Apache helicopter looks like a hulking brute next to the sleek lines of an F-14 fighter. The romantic leads, played by Nick Cage and Sean Young (Blade Runner), lack the chemistry of both Cruise and Kelly McGillis, and Cruise and Val Kilmer (and we’ll have more to say on the subject of the ‘romance’ subplot of Fire Birds later). And while Nicolas Cage has considerable gifts as an actor and a compelling screen presence, neither of those are in evidence here.

There are, in fact, several different actors known as ‘Nicolas Cage’ working in movies these days. One Nick Cage is an academy-award winning actor, who’s performances are soulful and deeply felt. You’ve seen him in Leaving Las Vegas, Joe, World Trade Center and Adaptation. Another Nicolas Cage is an over-the-top ham, supercharged with manic energy. While his particular skillset can be put to great use in movies like Face/Off, and Wild at Heart, he frequently turns up in schlocky fare like The Wicker Man, Vampire’s Kiss and Ghost Rider. The latter three are elevated into another level by this Cage’s bug-eyed crazy. Alas, neither of those Cage’s show up in Fire Birds.

The Cage that Fire Birds does have is the ‘phoning it in’ Cage. You may remember him from such films as the recent remake of Left Behind or The Sorceror’s Apprentice (both movies which would have greatly benefited from ‘Crazy Cage’). This Cage just comes in to collect his paycheck and give the producers a name they can slap on a poster. He can’t usually be bothered to, you know, act. 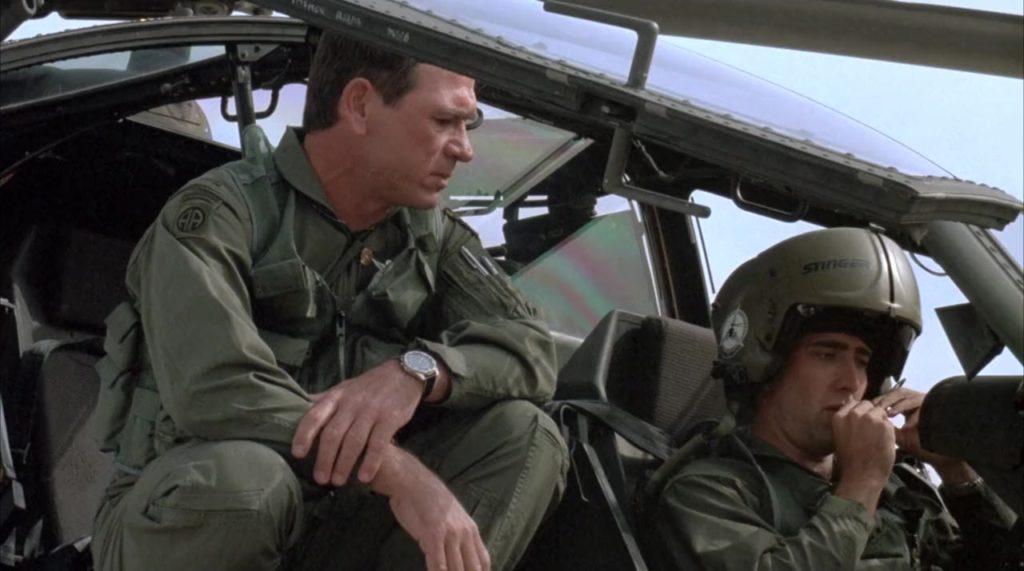 ‘Crazy Cage’ does peek through on occassion. Witness the florid way he slides into a laundromat in pursuit of Sean Young (I really do promise, we will talk about that subplot in a bit). Or see the ungainly karate kick he delivers in frustration when Young won’t accede to his wishes at one point in the movie. Or the increasingly obnoxious way he shouts “I am the greatest!” with each kill he makes in a simulated training exercise. These flourishes are too few and far between to add any interest to his character. His detachment just leaves a Nick Cage sized hole in the center of the movie, and Fire Birds doesn’t have anything else with which to fill it.

So what is Fire Birds about? Well, in the movie, the United States is sending military advisors to help battle the drug cartels in Catamarca, Argentina (!), Cage’s Jake Preston among them. The cartels, however, have recruited a deadly mercenary named Stoller who happens to be both an ace at helicopter piloting and an ace at self-marketing. Some of the headshots that the US Army has of this man are downright artful!  Stoller makes short work of Preston’s entire flight group, so if the army is going to defeat these cartels, they’ll need to level up both their skills and their gear.

Preston is sent to train for an elite task force, whose mission will be to fly the advanced Apache attack helicopter in an effort to take down Stoller. Tommy Lee Jones (No Country for Old Men) is Brad Little, the man charged with shaping Preston into the best helicopter pilot ever. Preston already believes he is the greatest pilot (despite no evidence backing this up), so you’d imagine the two men to butt some heads. Luckily, Little also thinks Preston is the best (again, no evidence), and just wants to push him to be even better! *Whew!* we almost had some sort of meaningful conflict that leads to drama there!

Accompanying Little on his training assignment is Sean Young’s Billie Lee Guthrie, another army helicopter pilot and someone who has had a relationship with Preston in the past. Guthrie is way over Preston by this point, and just wants to focus on her career. Preston, on the other hand, apparently never got over being dumped. He’s at first hostile to her presence, but soon decides this is the perfect opportunity to rekindle their romance. He shows his affection for her by stalking her, repeatedly making unwanted advances, repeatedly asking her out even when she turns him down multiple times, even grabbing and kissing her unexpectedly. Luckily, Preston is the best, otherwise all of these tacts would look a lot like sexual harassment. 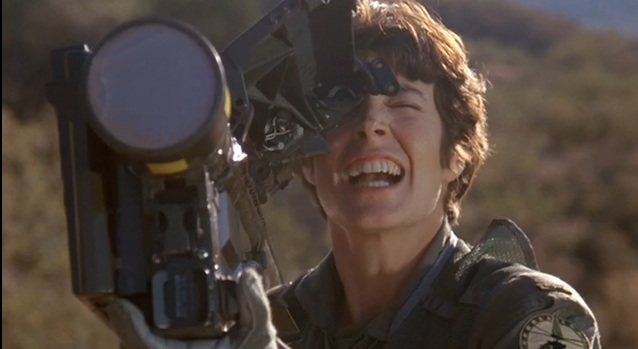 Women in these sort of military adventure films are never given enough consideration in any case. Little is married, with three young daughters, yet he complains about not being sent into a dangerous combat operation. We never find out what his wife and family think about such a prospect. When Preston finds out that Guthrie is coming with his team to South America, he’s horrified that she’d be allowed to come on such a dangerous mission. Why, he cares about her and wants her to be safe! It must say something about their relationship that she doesn’t seem to have the same concern for him.

As a movie, Fire Birds has nothing to recommend it.

In a movie like Fire Birds, however, all this interpersonal sludge takes a back seat to the exciting action scenes. Unfortunately, Fire Birds doesn’t have any of those either. Now I ragged on the Apache’s appearance a little up top, but really there’s brutal, insectoid beauty in these powerful machines. They’re fast and heavily armed and armored. Seeing them in action, really seeing them unleashed, should be a thrilling moment. But once we get past the first couple of scenes of the helicopters rocketing over the Arizona desert, we’ve seen pretty much the best the movie has to offer. The combat scenes are just the same shots over and over again in different sequences. A helicopter flies towards a large rock. Another helicopter flies towards a different large rock. Nick Cage sweats. Stoller grimaces. A chain gun fires. Holes appear on a piece of sheet metal representing one of the helicopters. A helicopter banks wildly. Repeat until someone blows up.

As a movie, Fire Birds has nothing to recommend it. The action scenes are repetitive and unengaging, the performances are flat, and the screenplay veers between stupid and gross, but is never stupid or gross enough to be fun. 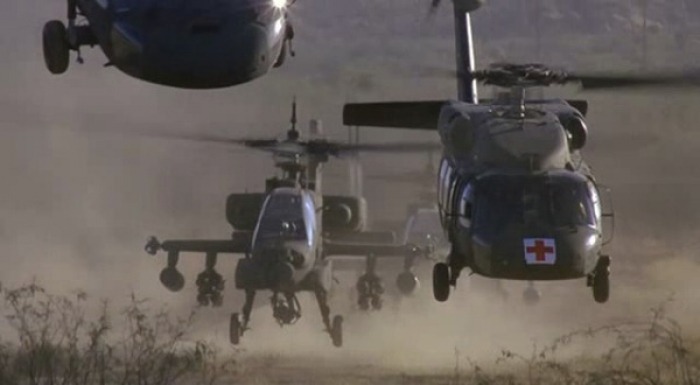 Fire Birds is out on Blu-Ray from Kino Lorber Studio Classics on July 10, 2018. The movie comes with an audio commentary by director Green as well as an assortment of theatrical trailers. The film is presented in its original 1.85:1 aspect ratio and has a resolution of 1920x1080p. In addition to the commentary, there’s both a 5.1 surround and a stereo audio track.